Share All sharing options for: Oriole Unleashes a New Age of Fine Dining

The subject of fine dining in Chicago triggers images of crisp white tablecloths and quiet servers hovering over guests with crumb catchers. It's a serious experience — available in heavy doses around town at places like Grace, Alinea, and Next.

This year, however, three restaurants will shake up the status quo, offering tasting menus that attempt to combine the entrapments of fine dining with a more light-hearted atmosphere and slightly lower price-point. The first, Oriole, opens tonight — to be followed closely by the Smyth & The Loyalist and Elske, later this year. All three may maintain the white tablecloths, but are also explicitly aiming to get away from the stuffiness that has historically pervaded the genre. Here now is a closer look at Oriole. View it not only as a preview of what's to come tonight, but also with regard to this new rush of restaurants that don't prioritize tweezer technique over having a good time.

Oriole's 16-course opening menu puts an emphasis on seafood. There is caviar accented with egg yolk gelato and aquavit, sea urchin with toasted rice and smoked soy, as well as steelhead trout accented by artichokes. The chef, Noah Sandoval, hails from the notoriously gluten-free and Michelin-starred Senza. But rest assured, there is gluten on the menu at Oriole, complete with a bread program by former Publican Quality Bread baker John Gorr. There will also be plenty of land-based proteins: From Togarashi-spiced beef tendon to Iberico ham with Monte Enebro cheese. According to Sandoval, the $175 dining experience packs a lot of value into the meal, which places as much emphasis on friendly service as it does on expert sourcing. 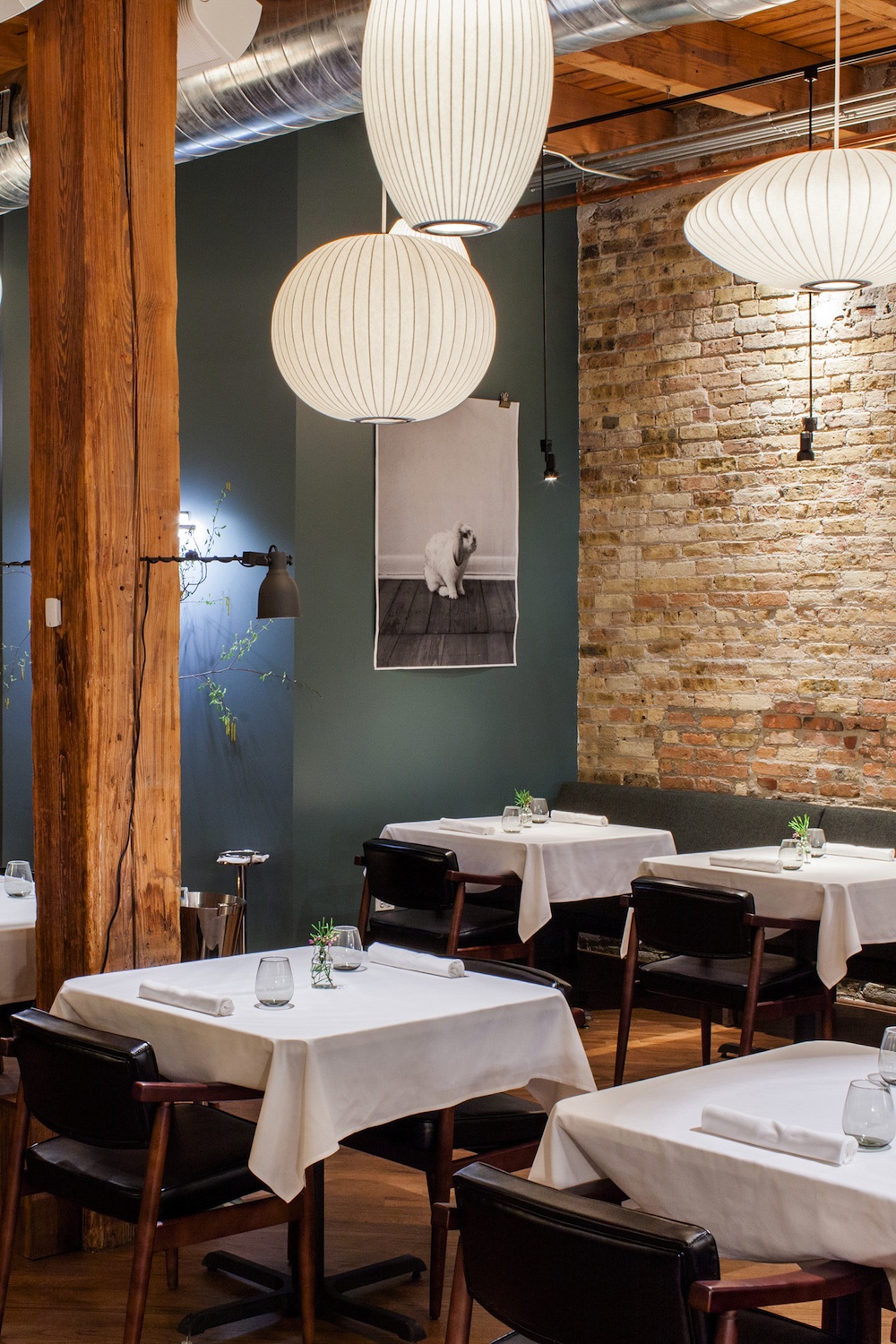 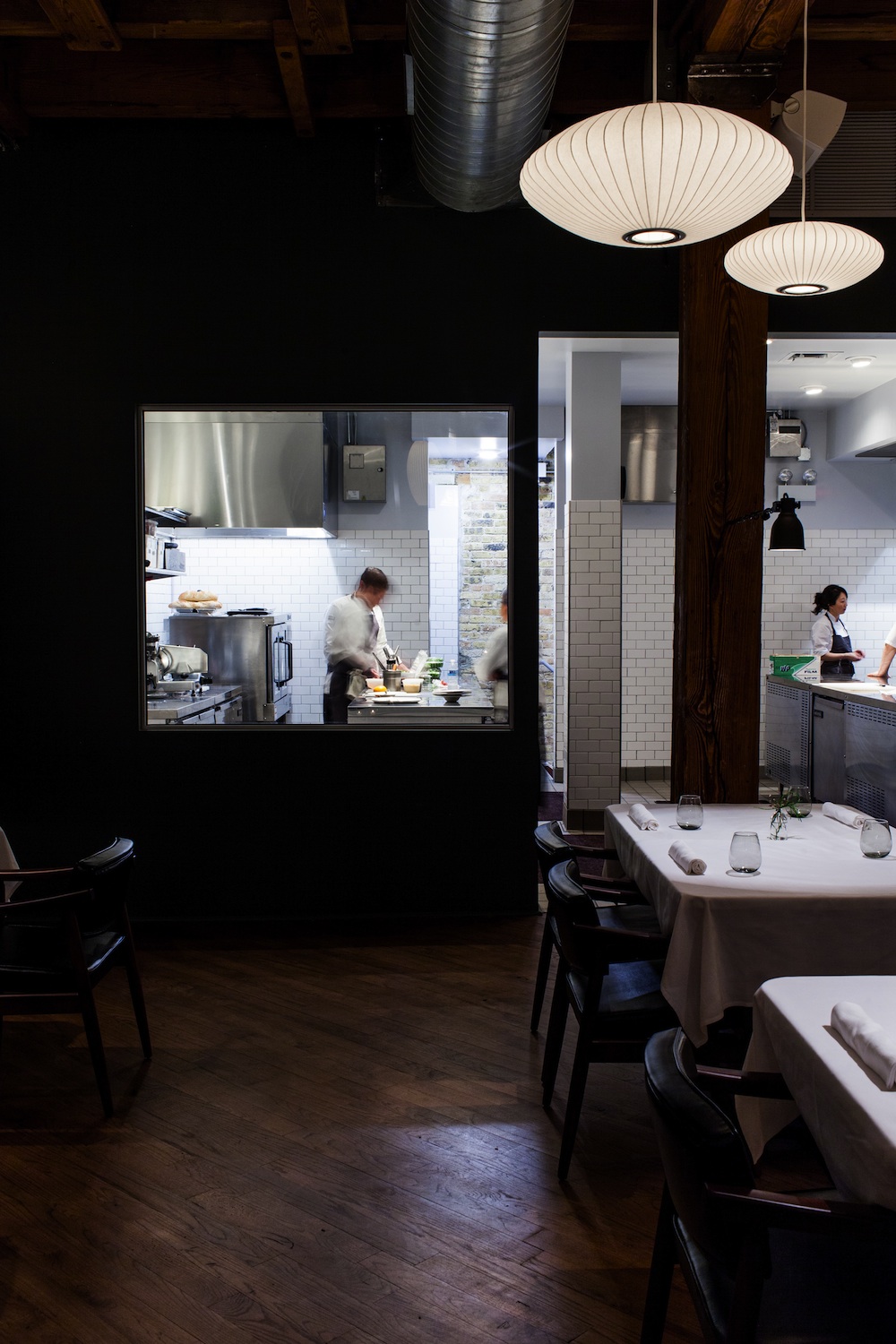 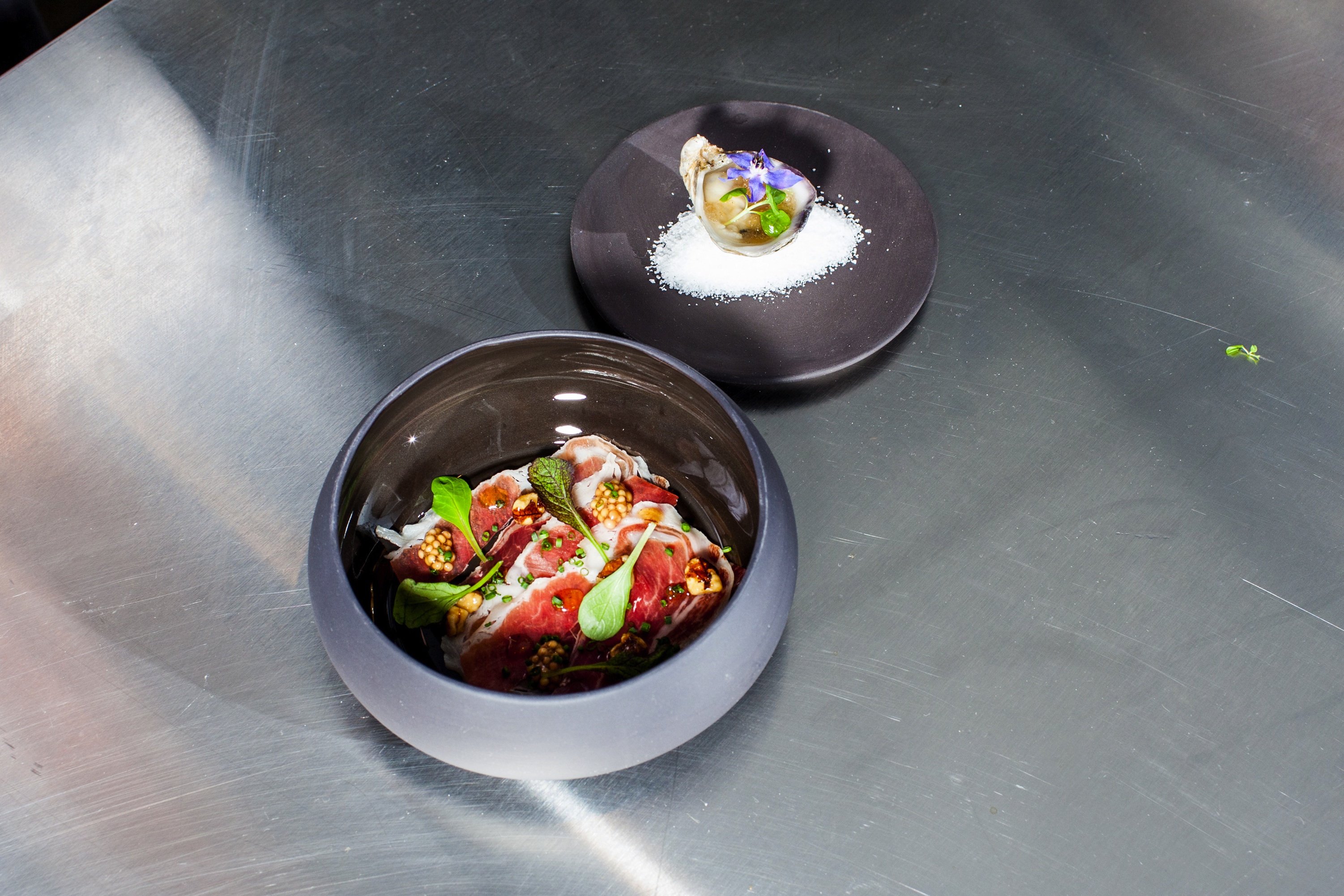 The 28-seat dining room is designed for comfort and efficiency. Brick and grey-blue walls lead up to the exposed timber ceiling that make the room feel like a sleek loft apartment—complete with a Debbie Carlos photograph of a bunny that hung in the owners' home. Grey banquette seating runs along opposite walls with a dozen tables filling the intimate space. Guests are encouraged to watch the chefs though two windows that separate the dining room from the open kitchen (pictured above). In that kitchen, the team works at two mirroring stations executing a menu that changes according to their whims and is heavily influenced by their experiences as cooks, diners, and friends.

Noah and Cara: A Love Story

Noah and Cara met while attending high school in Richmond, VA — specifically, at a battle of the bands. "Noah was playing [guitar] in a band, and I remember thinking he was really cute," Cara says. After college, Cara moved to Austin to start a career in banking and Noah moved to Chicago to do cook. They reconnected via Facebook in 2009. Driven by "the cold," Noah paid an impromptu visit to Cara in Austin. "When he visited me, we just had the best weekend ever," she says. They were married in Chicago less than a month later, on March 1, 2010.

That's right, all of the owners of Oriole are close friends — very close, in fact. Sandoval's wife Cara Sandoval is Oriole's general manager. Their friend Genie Kwon is the pastry chef. Kwon is currently dating Tim Flores, the sous chef. Not only are these four putting their reputations on the line to open an innovative restaurant that literally and figuratively turns up the bass in fine dining, but they're also testing their own relationships. Here are their stories, unveiling how this improbable restaurant came together.

Flashback to the start of 2015. Genie Kwon, just off a year stint as pastry chef at Boka, was out at a bar with her new friend, Noah Sandoval, and boyfriend, Tim Flores. She met both of them after a particularly satisfying meal at Senza. "They had been drinking for a while, so they were tipsy, and just said we should open a restaurant together," she recalls. The timing, however, was off. Kwon was coming off a stressful point in her career, which includes pastry experience at The Peninsula and Eleven Madison Park, and wanted to spend time with her family. "I've been doing this for 10 years, and it gets to a point when you can do everything you can to move up but, for pastry chefs especially, there's this ceiling."

Kwon was searching for a job that would not only allow her to showcase her skills as an accomplished pastry chef and baker, but also to break out of her corner of the kitchen. The dream that was Oriole—a chef-driven, fine dining restaurant in an exploding culinary neighborhood—seemed like the perfect fit. There, she would not only own the final five courses of the 16-course menu, but also have a stake in the restaurant itself as a partner. By May, the team, completed by Noah's wife Cara, had secured equally passionate investors and Oriole began to take flight. "It was a drunken dream at The Charleston and a couple months later, we were looking at spaces together," she says.

"We've shaped Oriole to be comfortable; for the cooks to have enough room to cook comfortably, for the servers to have room to serve properly," says Noah Sandoval, the former executive chef of Michelin-starred Senza. "In a restaurant like this, we want to make money, the No. 1 thing is to make money, but a close second is to make sure that everyone who works there is happy being there, being creative, and being focused." Sandoval worked his way up from a dishwasher to chef in kitchens throughout Richmond, Va. and Chicago, including Schwa and Green Zebra. At Oriole, for the first time, he's calling the shots in his own restaurant.

Sandoval sees himself as a filter, channeling the team's talents and creativity into one cohesive concept. This sort of dynamic is possible due to the team's comfort with each other both inside the restaurant and out of it. When not in Oriole, they can be found around a pool table at Chipp Inn or bowling at Timber Lanes. They have taken several trips together, including a road trip from coast to coast and down to New Orleans. The influence of which can be seen in dishes such as chicory custard with whiskey, cinnamon, and Tahitian vanilla. "Fine dining is starting to become really fun," Sandoval says.

Cara Sandoval joined the Senza team just days before the opening. A sudden need for a floor manager allowed her to leave her job in banking and dive into the hospitality industry. Within a year, she earned the restaurant a Jean Banchet Award nomination for Best Restaurant Service. "My style may never be typical in the restaurant industry, but I don't think that's necessarily a bad thing," she says. "The challenge in banking was to make people feel good about the transactions they were making. I carried that over here. I want to make friends with the people I'm serving and make them feel comfortable, so they don't have to worry about anything."

Sandoval, like her husband, strives to find balance between execution and fun. "There are certain technical aspects of fine dining that we certainly will not skimp on; we take that very seriously," she says. "I feel like being technically perfect in ways allows you some wiggle room in your silliness." For example, the first of two beverage pairings combines tea, beer, and cocktails with a white-heavy wine selection for $75. There's also a wine-only "reserve" pairing for $125. The pairings, along with an a la carte wine list, aperitif menu, classic cocktails, and a vermouth list are curated with the help of sommelier Aaron McManus, who most recently oversaw the wine program at Intro Chicago.

Sous Chef Tim Flores, like Kwon, was hooked on Sandoval after only one meal at Senza. At the time, the former GT Fish & Oyster cook was staging in the kitchen at Senza until a job opened up on the line. "Early on I knew that it was something special, the food was exceptional, and Noah had a really great palate," he says. From there the duo worked together for two years, taking a break only after Senza closed in 2015 to travel. While Flores complements Sandoval's chef skills—for turning simple ingredients, such as lamb belly, into elegant food art with the addition of coriander meringue, celery root puree, and anise hyssop—the duo's personalities are polar opposites. Sandoval refers to his sous chef as a "bulldog" in the kitchen: A highly-organized chef with intense creativity who shouts over Sandoval's whispers.

Together, the team's turning an idea — born over a late-night round of beers, nurtured on road trips across the country — into a welcoming restaurant that kicks things off with Kusshi oysters and sparkling rosé. "A lot of people ask, 'So what's the concept?'" Flores says. "It's things that we want to eat. If we want to put a lamb course on, we start thinking about it that way. We don't think about the concept before the flavors. The aesthetics are important, especially in a restaurant like this, but we really just make what we want to eat."