On Lines, Confusion, Barbecue and Ramen: A Chat With the G.M. of Green Street Smoked Meats

Share All sharing options for: On Lines, Confusion, Barbecue and Ramen: A Chat With the G.M. of Green Street Smoked Meats 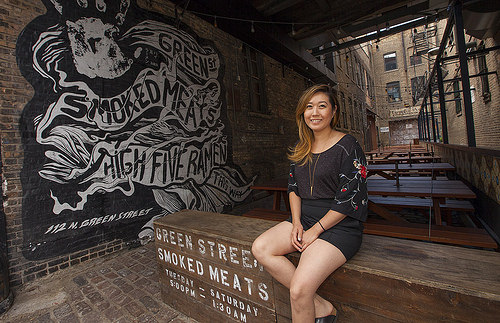 Green Street Smoked Meats is a departure from other Brendan Sodikoff projects, but customers, although sometimes confused, don't seem to mind. Lines snake through the large barbecue restaurant in a raw warehouse space with a tiny ramen basement dungeon, into the alley entrance and often spill onto the street.

General manager Stacy Bae is tasked with controlling the crowds, explaining the rules, and directing confused patrons throughout the night at Green Street. The D.C. native chatted about how and what diners end up there, how to manage the experience, and just how busy it is.

Why is Green Street so busy without much promotion?
I think a lot of it is word of mouth. I also feel that because we're in a city with not a huge quantity of barbecue restaurants, I'm sure when barbecue restaurants pop up, barbecue connoisseurs are like "oh my gosh, there's a new one." And strangely and funnily enough, a lot of people have told me that they've found our restaurant by smelling the barbecue down the street.

Really?
Yeah, they've literally come through the door really confused looking. We usually have a greeter or host when you come through the door to explain how the line works and our house rules and a lot of people have come in very bewildered and they tell me they had no idea this place existed and they just smelled something like barbecue and followed it to the restaurant. It's happened at least 10 or 12 times.

Are people ever confused about how to get in?
Yes. The setup was not the easiest or going to be the most accepted because people are used to a traditional restaurant, especially restaurants that are affiliated with Hogsalt, so it did take a second for people to forget where we were, how to order, that you have to throw your own trash away. At first it was very hard, we had to do a lot of explaining, but now it's kind of fun because you have a lot of people (for whom) it's like this weird secret.

What are the house rules?
There is no formal table service, kind of like a cafeteria-style food line. We let them know they can grab their own seats at the picnic tables, that there are water stations and we politely ask them to dispose of their garbage at the appropriate garbage stations. And then (High Five) Ramen also has house rules, but those are more ambiguous and definitely a different environment.

How does the line form?
What happens is when people get to the door and its starting to get really busy, the line stretches around the bar, and once it goes from around the bar and hits the other side at the end of the bar, we prevent people from coming in just because there's no space for them to wait. But it's also conducive and way more fun for people to have the line form around the bar because they literally just talk to their friends and drink alcohol.

How long have you seen the line get?
A couple of times in the last month or so it's gotten outside of the dining room, down the building, down the wall against the patio, and then out of our patio and a little bit down the block.

How long do people have to wait when it gets like that?
Like an hour. People are like "an hour!" and get all freaked out, but then I tell them that if it's a Friday and Saturday and you don't have reservations anywhere, you're going to wait 45 (minutes) to an hour anyway at any restaurant. So it's kind of the same thing except you're drinking in line waiting for food, like you're waiting at the bar at some restaurant. 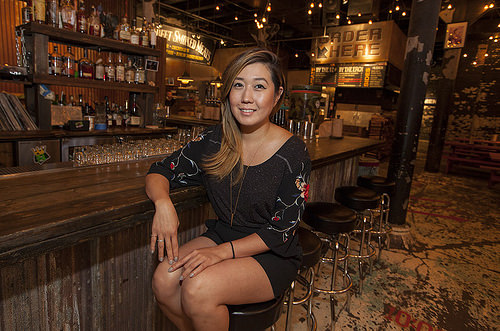 How soon does seating fill up and what advice would you give people on how to get a seat?
When we first open at 5:00 p.m., it doesn't fill up too fast. The patio usually fills up the fastest, but the seating doesn't get really full until around 8:00 or 9:00. Some advice: people who come with larger groups should come all together in an earlier part of the evening and they'll have no problems. For smaller groups, if it gets really crowded, we help people find spots. We'll have some people floating around to consolidate people and scooch them down, and then we'll let people know "those spots are available if you guys are looking."

How many covers do you do on average?
Honestly, that's a hard question. On average we do anywhere from 500-700 covers on a weekend. On a weekday, probably like 300-400. And a lot of the drinkers like to sit in the bleachers, where that stage area is, and that can seat a whole host of people. It's actually my favorite seat in the house.

What would you say your clientele is?
It's actually really diverse. The demographics also change during the course of the evening, as well, which is interesting to see. During the hours of 5:00, 6:00 and maybe even 7:00, we get a lot of 9-to-5ers, we get to-go orders, we get families. There are definitely a lot of days where it's total family hour with children running around, there's dogs on the patio. But then towards the middle of the evening it changes to more of a younger crowd, people who live in the neighborhood. And then towards close we get a lot of industry love. It happened a few nights ago where by 11:00 or 12:00 every person in the restaurant was industry.

With High Five Ramen, do a lot of people really know it's there?
That's an interesting question. I feel like people know it's there just because I feel like the ramen craze is still continuing in this city so people are really tuned into new ramen places opening, but at the same time I'm not sure they know where it physically is.

Do people ask where it is or do they just wander around trying to find it?
We have two door people: one stands at the front of Green Street and the other stands at the end of the patio. And the one at the end of the patio takes over carding and also directs people, but some people still don't listen and wander around looking really confused. So we're just like, "are you looking for High Five Ramen? It's over there."

Does it fill up really fast?
It's 16 seats and it's always, always full. There is sometimes a little lull, like 30 minutes of downtime where everyone leaves at once around 10:30, and literally within 30 minutes it'll fill right back up. And those 30 minutes is when (staff can) use the bathroom and stuff because from open until close the seats are just always full.

It made me nervous at first because I was afraid people would be like "oh no, it's so small. How long am I going to have to wait?" But people are willing to wait. And between 11:30 to 12:00 we get a really heavy industry push; ramen that late in this location, chefs love it. 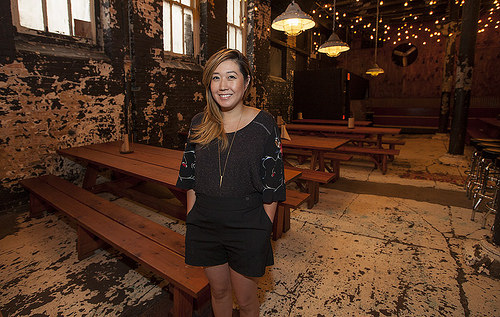 How does the line form?
It's usually not as long as the Green Street line. There's a system where you go downstairs, there's a clipboard and you sign your name and write how many people are in your party and if you'd like to sit together or not, just because larger groups are harder to facilitate seating at the same time. Once you sign your name you can hang out in the stairwell, but if one of the employees comes and calls your name and you're not there, they'll jump over you. If we can squeeze them in with the next seating we will, but we try to forewarn people that if they're not physically there, you may get skipped. It's like only the strong survive.

How long does the wait get?
45 minutes to an hour. But it's pretty weird to estimate; there's something about eating ramen where people don't sit for very long and they also don't socialize when they're eating ramen. It makes you want to eat it very fast, which is why we have a lot of solo diners too. People don't linger as much.

When the patio closes for the winter, do you expect it to be mayhem?
It's going to get a little crazy. When we were open in the winter, it was definitely a packed house. But we do a lot more directing in the wintertime and we are staffed and equipped to alleviate that.

Have any celebrities or notable people come in?
Our biggest celebrity was Derrick Rose. We used to have this little basketball hoop over the door and when the line was really long, we'd play this game with our guests that if they shot a basket and made it, we'd give them a shot of whiskey. When he was there he actually signed our basketball. We actually still use it from time to time.

It has to be crazy to work down at High Five Ramen. You're just immersed in that room for hours and hours at a time.
When we opened I worked down there with the training staff. You go down (during the day) and when you come out it's nighttime and everyone's drunk.

Is there anything else people should know?
It's always a golden rule for barbecue: the earlier the better. We only smoke so many things, eat earlier because things sell out. And it's just a different vibe, it's more chill. But if you want something more high energy, 8:00-9:00 is primetime.
· All Green Street Smoked Meats Coverage [-ECHI-]
· All High Five Ramen Coverage [-ECHI-]
· All Gatekeepers [-ECHI-]