One Year of CH Distillery: How Chicago's First Distillery, Bar, and Restaurant Was Born

Share All sharing options for: One Year of CH Distillery: How Chicago's First Distillery, Bar, and Restaurant Was Born 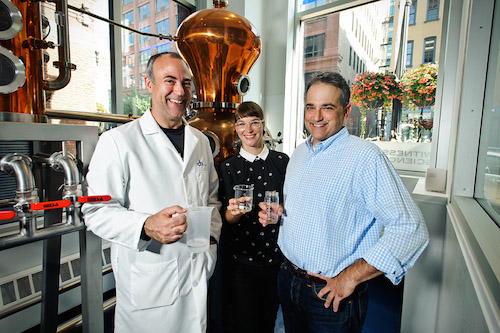 The people behind CH Distillery traveled an interesting road to bring Chicago's first distillery, cocktail bar and restaurant to Randolph Street. Originally focused on vodka, they navigated bureaucratic red tape, educated the city and customers, while continuing to expand its repertoire both in-house and around the state.

How did CH Distillery originally come about?
TA: About two-and-a-half years ago I realized this is really what I want to do. I had been a home brewer for a lot of years and I actually tried to start a brewery when I was about 25 in San Francisco with two buddies and 5000 bucks and we kind of drank through the 5000 bucks doing research before we got the brewery off the ground. A couple of years ago, I was in financial services, I was totally burned out on it, and I decided it was time to try to live out my dream and vodka was the next logical step because you always start (making vodka) with a fermentation so it's the same sort of thing. Mark and I were big vodka drinkers together for many years, so I thought who better to call than my buddy who's good at sales and loves vodka.

What hurdles did you cross to get it done?
TA: We were the first ones to do a cocktail bar and distillery together and it was quite an adventure getting the city—the zoning people, the liquor license people, everybody—to understand what we were doing. Everybody was great but it took a lot of doing. Trying to do something new in the city of Chicago is not always the easiest thing, especially when it has to do with liquor. Our liquor license is kind of interesting in the fact that we can only serve what we make.

Did that push you to make different types of spirits you weren't planning on?
KS: 100 percent. In addition to our core products that we distribute throughout the city, we have the ability to create spirits and make cocktails we want to serve, so we're able to get creative and try to reach everyone's palate.

In the beginning were you just planning on making vodka?
TA: Vodka was the reason for being here but we knew we were going to do gin as well. We had two styles of gin: Mark and I came up with what we call a "Gateway Gin" for people who don't like gin, and Krissy added a classic bartender-friendly gin. Then we knew with our liquor license that we'd be making other things as well: rum and some type of whiskey. In fact, the very first thing we distilled was a rum, which is sitting in bourbon barrels down in the basement and is aging beautifully. We haven't even served it yet.

How did the cordials and liqueurs come about?
ML: For the limoncello, a friend of a friend from Naples brought us the product last summer before we opened and asked if it was possible for us to produce this and make them "street legal," based on the fact that they weren't comfortable trying to sell it to restaurants that weren't comfortable buying it under the table. We were able to get a label approval and help distribute it through our distributor. And our Amaro was born on a customer's request that she would love to buy a lot of Amaro if we had one. By the time we created it, she wasn't (coming in) anymore. 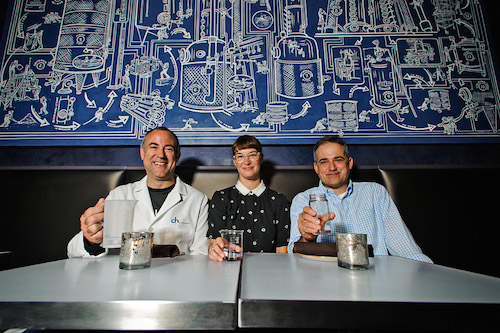 Is most of your business in-house or retail?
ML: Right now we have a total of 226 accounts statewide, 117 bars and restaurants in Chicago and 36 retail locations. The wholesale side needs to catch up. If we can get on as many bar and cocktail menus as possible, that's going to help build a brand without us having to appear in every magazine and billboards in town.

TA: Our own bar is a very good customer, but it's not the biggest. So some of our biggest customers are Nico Osteria, Drumbar, Girl & the Goat, the whole One Off family: The Publican and Blackbird and Violet Hour. They want to support local and they're a neighbor down the street and we really appreciate that and we can't thank them enough.

You guys are serving some interesting craft cocktails. Was there any temptation to make simpler cocktails to showcase what you're distilling?
KS: We showcase our spirit in its purist form and it's on our cocktail menu: rye bread, ice-cold vodka and pickles. But we have a whole cocktail program with some seasonal tweaks, like the addition of boozy snow cones. And then when we create a new spirit we create a new cocktail too so it will always be evolving in that fact. Our next spirit that we'll release is the Aquavit, so we're already working on some cocktails for that.

How has the food gone?
KS: I think that the food and cocktail program really compliment each other. Given that we're in the West Loop, it was very important for us to provide great food, there are a lot of foodies in the neighborhood. It's been very well received—once people actually try it.

Do a lot of customers to take the tours?
ML: We have official tours on Tuesdays and Saturdays at 5:30 p.m. and those have been really fun for us because we're really about demystifying the whole process of making spirits. We talk about the bourbon that we have; we tell people we don't actually make it, we buy it from a different distiller. We call out some of the bigger brands that claim to be handmade but aren't and we show people what truly handmade vodka is. People just have a really good time but you can talk for a while, but as much as you love what you're talking about, everybody really just wants a drink. 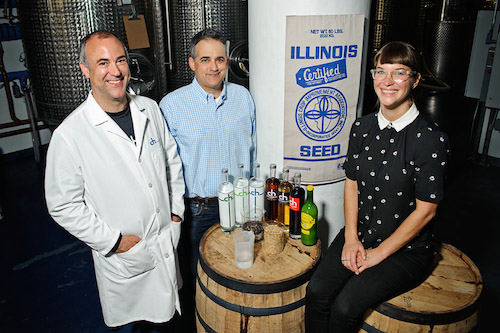 Obviously the craft local brewpub scene has blown up recently. Do you feel the distillery scene is coming along?
ML: There were two wonderful places that opened in our wake, Rhine Hall and Chicago Distilling Company, really awesome people. The thing about distilling is it's definitely more technical than beer brewing. It's maybe not quite as big as brewpubs, but it is a really wonderful combination.

TA: If you're a brewpub you can get a full liquor license, so you can not only serve what you make but you can serve cocktails and everything. Whereas for some reason, we are limited by the state of Illinois to just being able to serve what we make. Which I'm not saying that in a complaining way—it's a cool and fun challenge—but it's a little easier business model for a brewpub.

Do you feel that the state discriminates more against liquor than beer?
TA: No I wouldn't say that; I just think they don't understand it. They really should open it up because it would encourage more distilleries to come on board, but we've embraced it, we think it's kind of cool to be able to have a bar where you can't get a glass of beer or a glass of wine, yet we're still wildly busy and successful so bring it on.

What do you have in the works for the future?
TA: On the spirit front, oh boy, we have a lot of stuff coming up. We sourced 1000 pounds of chestnut flour from a grower in Ohio, fermented it and it's sitting in a barrel downstairs in our basement; that's going to get released at some point. I've never heard of anybody else anywhere fermenting and distilling 100 percent chestnuts. We've got a whole bunch of cherry juice coming in from Traverse City, Michigan in about three weeks and we're going to ferment and distill that and turn it into a nice cherry Brandy. Krissy mentioned we've got an Aquavit, which is that Scandinavian-style gin with caraway and dill flavoring, that's going to come out this fall. We did collaboration with the Ale Syndicate: They have a Saison-style ale called Du Sable and brought in four kegs of it, we distilled it and we put it in a little barrel.

KS: And then we're all about collaborations. We picked 10 Chicago artists to do artwork on 25 bottles each, so we're going to have an event on November 4 and sell the bottles with a portion of proceeds going to Un86ed. We've also been doing private events in the back that I like to call the "distiller's table," kind of like a chef's table. People can have a private event, have a tasting, they can even do a private distilling—we can actually make their own personalized spirit if they want.

TA: We've just had a ton of fun. That's what it's all about.
CH Distillery is holding a one-year anniversary party on September 23.
· All CH Distillery Coverage [-ECHI-]
· All One Year Ins [-ECHI-]