Sneak a Peek Inside Six of Fall's Hottest Cookbooks

Share All sharing options for: Sneak a Peek Inside Six of Fall's Hottest Cookbooks 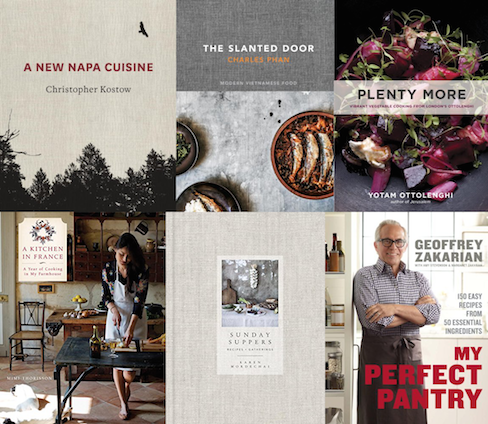 Six of the best cookbooks in recent memory will be hitting shelves this fall, just in time for home cooks to shake off grilling season and get down to business. From a Michelin-starred chef's first book to a personal tale of French country cooking to an introduction to delicious vegetarian cuisine, these six books offer something for everyone. Click through the titles to take an exclusive look inside and enter to win all six:

A Kitchen in France

The first cookbook from Christopher Kostow, head chef at the three Michelin-starred Restaurant at the Meadowood, A New Napa Cuisine explores the influence the region has had on the cooking and career of this renowned young chef. The one-time line cook presents 100 recipes that capture the ingredients, and spirit, of Napa Valley. Published by Ten Speed Press, A New Napa Cuisine goes on sale October 14.

With My Perfect Pantry, Food Network Iron Chef and restauranteur Geoffrey Zakarian eschews fancy and exotic ingredients, instead working with a base of 50 readily available ingredients to create more than 150 distinct recipes. Published by Clarkson Potter, My Perfect Pantry goes on sale October 7.


A Kitchen in France

A Kitchen in France follows Mimi Thorrison and her family through a move from Paris to the countryside of Médoc, and the ingredients, techniques, and dishes they discovered along the way. Illustrated with stunning photography from Mimi's husband, Oddur, this charming cookbook is a highly personal look into the delicious cuisine of the French countryside. Published by Clarkson Potter, A Kitchen in France goes on sale October 28.

The chef and owner of The Slanted Door—the renowned San Francisco restaurant that introduced modern Vietnamese cooking to the Bay Area—Charles Phan has penned a love letter to the restaurant he created nearly two decades ago. Heartfelt stories and essays feature alongside some of The Slanted Door's most iconic recipes. The cookbook, published by Ten Speed Press, will be released on October 7.