Bill Jacobs and his brothers have seen tastes change since they left the bagel business 15 years ago. For example, vegan customers can order whipped tofu as a substitute for cream cheese when Jacobs' new venture, BroBagel, opens tomorrow morning at 6:30 a.m. "I didn't even think they had whipped tofu back then," Jacobs quipped.

It's fitting that Piece Brewery and Pizzeria, which is run by Jacobs and his brothers, will get a sibling of its own next door with BroBagel. There are no seats, just a stand-up counter to encourage the morning commuter crowd. Jacobs also envisions downtown businesses to take advantage of bagel deliveries.

There won't be any similarities, Jacobs said, between the taste of BroBagel's boiled bagels and Piece's thin crusts. However, there's a bit of synergy. BroBagel will serve a pizza bagel ladled with Piece's red sauce, mozzarella and optional pepperoni. There's also the beer bagel made with Piece's Flat Iron Stout. 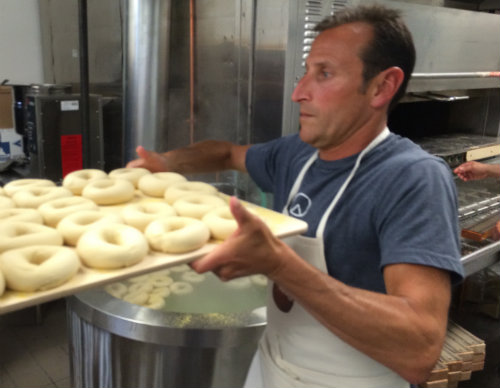 The name is a throwback, as Jacobs missed the bagels baked at Jacobs Bros. Bagels, a 20-location chain that he and his brothers—Andy, Peter and Steve—started in 1983. They sold the business in 1999 and the last one closed around 2004.

When the former tenant of the BroBagel space—Salon Blue—asked to terminate its lease early, Jacobs saw the chance to bring back his brothers' bagels. Construction began in the spring, and Jacobs originally planned for a June opening.
"We loved the product, we loved what we used to do and there's a demand for it in this market," Jacobs said.

While there's some nostalgia, BroBagel won't be a carbon copy of the old business—Jacobs said they're upping their game. They'll serve Metropolis Coffee and sandwiches with more upscale ingredients like roasted cauliflower and Manchego cheese. They'll also feature flavored cream cheeses including Sriracha and garlic confit.