The story is local restaurant legend. In 1951, a seven-year-old boy lives 100 feet away from an Italian steakhouse on Franklin Street and would open the door for customers for tips but the owner, Gene, would constantly "kick him in the ass" and throw him out.

Years later, the grown-up boy's brother buys a house across the street from said restaurant owners. The man starts dating their daughter and eventually becomes their son-in-law. Now an advertising executive, he buys the restaurant from his mother-in-law after her husband dies in 1989 because he "wouldn't let the restaurant go away." That story is immortalized in a mural inside Gene & Georgetti, the oldest steakhouse in Chicago.

Now 70, owner Tony Durpetti has successfully upheld Gene & Georgetti's iconic status. The restaurant still cuts all meat on-site, uses the same supplier, and serves to third-generation customers. Durpetti chatted about the history, staff, customers, food and tradition at the oldest steakhouse in the meatpacking center of the world.

Do you feel that the newer steakhouses copied what you did in any way?
There's no question that there's a lot of competition right now. But by the same token, I don't think any restaurant—and I'm not saying this to brag, I think this is true—can boast as many regular customers as we do and no matter who opens, they're always here. We have second and third generations coming in here now.

Who is your oldest longtime customer?
Actually one that just passed away, unfortunately. He was 96-years-old and had been coming here since about 1942, right after the restaurant opened. We have employees that have been here 41, 42 years. No one ever leaves this restaurant, that's the thing.

Do you feel any pressure to uphold the tradition of the Chicago steakhouse?
We do our best to uphold tradition. We don't make any major changes; we're still the same place. And we don't react to the new people who are coming around with the new foo-foo types and all that. I mean, that's wonderful, but that's not the way we do it. That's not the old-fashioned way.

What has changed there since the beginning?
The biggest change here was about in 1997 when we bought the building next to us and broke through and made the place bigger. The whole exterior, the whole interior of the place looks exactly the same as it was way back when. We added about 110 seats to the restaurant and made the kitchen a real kitchen. The building we're in was built in 1872, six months after the Chicago fire. But the menu itself hasn't changed much over the years.

Do you find that people eat less steak these days?
Well, among the regulars, that's the case because no one eats steak every day. Some of our regulars come here three or four days a week. But we have a major variety of Italian specialties on the menu as well. Some regulars come in and they want something special and the kitchen will make it for them. If somebody wants an omelette at night, the kitchen will make it for them.

Have you always cooked the steaks the same way?
We've always cooked the old fashioned way. We use a regular gas oven and they're modified to a degree. We make the temperature a lot higher than it is normally to char on the outside and hold all the juices inside. We add no salt, no pepper, no nothing to the steak. We used to dry age years ago but we just stopped it. 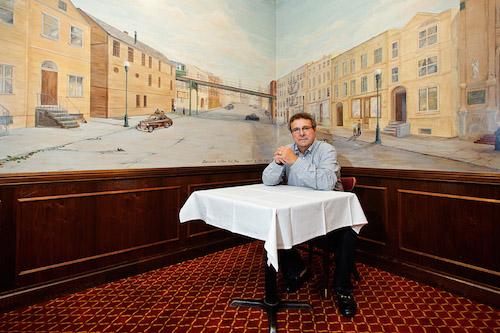 Do you remember when the steakhouse boom started?
Way back when, it was really just us and a place on 69th called Eli's that's now closed, but the big steakhouses started coming in like ten years ago besides Gibson's, which just celebrated its 25th anniversary.

Frank Sinatra, Lucille Ball, Bob Hope. What is your favorite story from all the entertainers that have come in?
Sinatra would come here all the time. That was the funny part. He'd always joke around and he always came after it was closed. They'd come and eat dinner at 1:00 in the morning. Jack Lemmon came in here one night, I went up to him and said, "I know you've heard this a thousand times and I'm really not star struck, but you are really are one of my favorite favorite actors. You do it with such enthusiasm." He was very nice and on the way out he said, "Let me just tell you one thing: From the way I was treated here tonight, I'm a great fan of yours, too." And that made me feel terrific.

How has service changed throughout the years?
Not at all. We've got professional waiters here; they raise a family, they put kids through college. Busboys wait in line for one guy to retire so they can move up. It's how it works here. When somebody retires they get a big party thrown for them and their family and then I give them a check and a plaque for however many years they've been here. The joke is that someone has to die or retire to get a job at Gene and Georgetti.

What did you have to learn when you took over the business?
I learned everything; I didn't know a thing. I literally learned the business from the employees. They taught me what was going on and I knew them all because I was in the family. A guy named Gus Mantas, a bartender who's been here for about 37 years, took me under his wing.

What did you have to do to learn about steak?
I just learned about the meat and cuts, I never cooked anything. I made a deal with Allen Brothers years ago, I sat down with this guy Bobby Hatoff, who was a great individual, and I said, "Bobby, my father-in-law had a certain way of doing things. If you can supply this information to me regularly at a fair price, I'll never go anywhere else." And we did that in 1989 and I've always been with him.

Throughout the years, how much steak have you eaten?
Actually, believe it or not, I'm not really a big steak-eater.

How much did you charge for steak when you first took over?
High 20s, low 30s. And now they're high 40s. So they've gone up about 80 percent.

What do you see as the future for Gene and Georgetti and what do you see in the future for steakhouses in general?
Some are going to go away, I guarantee you. That's just going to happen. A few of them here spend a fortune to open up and they're just never going to make that money back. But I see us continuing: I've got a daughter that does the marketing, I've got a cousin who's the general manager. And we do things that no other restaurants would do: if a guy needs to buy a house we'll lend him money interest-free, it goes out of their paycheck. We've done that before and we've never lost a nickel. And as long as people like coming here, we'll be doing the same thing over and over again.

Do you see yourself retiring any time soon?
Not really. I went through a little battle a few years ago with some kind of lung infection that almost tore me apart, literally. But luckily they found what it was. I'm not going anywhere, pal, end of story.
· All The Five Days of Meat Coverage [-ECHI-]
· Gene & Georgetti [Official Site]