Paul McGee finds it hard to believe that his pet project, Three Dots and a Dash, has been open for a year already. The Lettuce Entertain You cocktail guru wanted to open his tiki revival for years, and after coming over from The Whistler and weathering construction and fire delays, the subterranean bar with an alley portal has been wholeheartedly embraced by customers and press alike, winning "Best New American Cocktail Bar" at Tales of the Cocktail less than two weeks ago.

McGee chatted about the original idea, being surprised about the acclaim, whether he's re-started a tiki trend, and what to look for at Three Dots in the future.

How has the first year gone and how often have the drinks changed?
We've done a big over-haul of the menu. When we first opened, we had 20 drinks on the menu and then a little bit after that we introduced the Rum Book that has all the rums listed and also it has 16 other cocktails that are more non-tiki cocktails, more traditional rum cocktails. And we do special events where we'll have a special menu for that night, whether it be for Don "The Beachcomber"'s birthday or when Jeff "Beachbum" Berry came promoting his new book, so we have a lot of fun in that aspect of running special menus in addition to our main menu.

What was the impetus for putting more classic, non-tiki cocktails on the menu?
I think that kept showing how versatile rum can be, not necessarily always in a tiki format. You'll have a person come in who isn't a big fan of tiki drinks, or their perception is that they're too sugary sweet, so we have the different drinks on that other menu to highlight the rums a little bit and show we're not only a great tiki bar, but a great rum bar, too.

How has the clientele taken to the tiki concept?
I think that when we first opened, there was a curiosity because there's not really a prominent sign showing what we do. I think more and more people are embracing the fact that what we're doing is something different instead of getting what they get at their normal bar down the street. Now you have more people that have been here once, twice, three times bringing in other people that have never been here before.

When your pet project gets so much critical acclaim does that make you feel validated?
Yeah, it really does. It really surprised me and I think it surprised everybody how people have embraced us and the concept. When we went in, we had goals of doing a certain level of business and we thought we could hit those goals but it makes it really sweet that this thing that I wanted to do several years ago is finally opened and people are really embracing it.

What surprised you about that?
I mean, I don't know! I always had confidence that it would do well and people would come in and have a good time, but I just had no idea that there were this many people that were really into it. When you're preparing and training and hoping for the best and for it to be busy, it means something and that it's not all for naught. And the staff was really on board from day one and I think their exuberance of it and being great ambassadors of the bar really kind of solidified things and it helps when you're busy right out of the gate and it just kind of snowballs.

It was busy right off the bat, but how has it been over the whole year? Was there a dip during the vortex or been steady or on the rise?
No, we thrived during the vortex because it's a great escape. You have no idea what time it is outside, you have no idea what the weather is. I think our biggest challenge has been that early business, especially during the summertime, because you're competing with outdoor spaces and obviously we don't have any of that here, but people are still coming in early and having a great time. 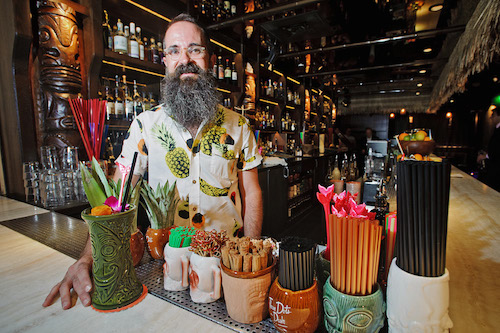 Tiki bars haven't been around very much for a while. Do you feel like more people have caught on to what you're doing and are going to start opening more tiki bars? Have you re-started a trend?
Maybe. I don't think we'll ever get to a point where we were back in the 50's and 60's, back in the heyday, where there were three major tikki bars competing within a mile of each other. I think when people see something fun or successful, there are people who do imitate, but I don't think it's not necessarily a bad thing. No one (has opened another one) yet, but I'm sure it's coming.

When you first had this idea, and then when it finally opened, did it worry you that there haven't been many tiki bars around for a generation or two?
Yeah, I thought about it. You think, "what if no one shows up?" Well, then nobody's going to imitate you at all. I felt that what we were doing was trying to bring it back and modernize it, especially with the cocktails and flavor profiles of the drinks. I thought I could bring those flavors back and the integrity of those cocktails because they were really good in the beginning and got such a bad rap at the end (of the era), and rightfully so.

When you start taking shortcuts with any cocktail and start making margaritas with margarita mix that comes in a bag that you add water to, that's never going to be great. When you start making these tiki drinks with fresh juices again instead of sour mix or some super-red grenadine, that's what I thought I could bring to the table.

What would you say has been the biggest obstacle you've had to go around in the first year?
I'd say the big obstacle has been doing the volume and making sure there's not any staff burnout and we're not compromising anything to make things easier. I think my second menu reflects that a little bit. I had to take a couple of drinks off the menu that were very labor intensive and replace them with drinks that were equally interesting but easier to execute.

What do you have in the works to keep things moving forward?
Changing the menu, the mugs, the swizzle sticks. We've got four new mugs that we should be releasing pretty soon that we'll stagger a little bit. We're doing more special events, keeping it fresh. But we're definitely not changing what we do, because I think you really run a risk of compromising your vision by trying to change too much and for the sake of changing. But there are definitely ways to inject it.

How has the food aspect gone?
The food has been very well received. It's nice because it compliments the drinks well, especially after you have one or two of these drinks you'll need a bit of sustenance to soak up the rum.

The drinks are definitely strong. Have there been a lot of instances of people falling of their bar stools?
No, that's the thing I've been super surprised about. I really was worried about that because a lot of these drinks don't taste like they have a lot of alcohol in them, but they do. And it's not so much that they're any more alcoholic than other cocktails you'd have in a classic cocktail bar, it's just that they go down smoother. I think we had an incident the first week we opened and that was it.

Anything else people should look out for that you're working on here or elsewhere?
We're just plugging along with getting the other restaurants up and going: RPM Steak and the Paris Club re-launch are going really well. We're going to do a little bit more cocktail-focused programming there at Paris Club. And then I'd just really look out for the mugs at Three Dots and A Dash, the swizzle sticks, the new menus and all these new things.
· All Three Dots and a Dash Coverage [-ECHI-]
· All Paul McGee Coverage [-ECHI-]
· All One Year Ins [-ECHI-]