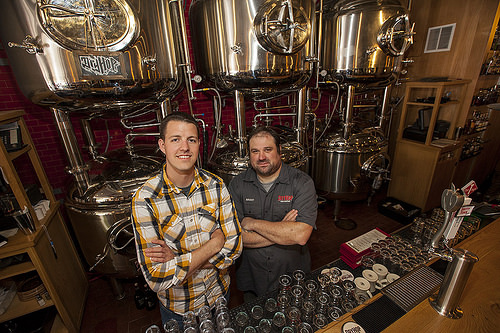 A year ago this month, two relative unknowns with brewing backgrounds combined to give Lakeview something it didn't have: a brewpub and microbrewery. Pre-opening hype and events meant DryHop Brewers was packed when it opened last spring and summer, proving owner Greg Shuff and brewmaster Brant Dubovick's assertion correct that the neighborhood was ready for "a brewpub we thought was materially different than a lot of the more traditional models."

While the winter was slower, business is back to opening levels this summer, buoyed by a new sidewalk patio, a focus on hoppier beers, and changes in the kitchen and food menu. Shuff and Dubovick talked about the concept, the beginning, and possible expansion of DryHop Brewers.

How has the first year gone?
Greg Shuff: It's been really great. The Lakeview neighborhood has really embraced us and we've been able to have quite a bit success out of here, we've had a lot of fun over the past year.
Brant Dubovick: We never wanted this to be a fly-in destination from Portland, Oregon or Denver. We wanted this to be real community-based and we've really been well received within the community and I think we've met all our expectations as far as serving the community of East Lakeview and Lakeview.

What went into your decision to open in Lakeview and in that specific location?
GS: We did a lot of research into the various Chicago neighborhoods and we were really looking for an area that had what I call a craft beer demographic, whatever that might mean, but it's sort of under-served from a craft beer bar or brewpub or brewery standpoint. There's a lot of young people here with their first out-of-college jobs and they don't have a lot of options to go out and explore the beer scene in this area.

Did you do anything specific to cater to those people?
BD: The main focus we started out with was to create six distinctive beers and two year-round beers. What has changed has been the total embrace of our hoppier selection. We have definitely become a hop-centric location and I've tried to keep about three hoppy beers on. We're finding that people here want more than some of the easier drinking beers, the "beer novice beers" like a blonde or a cream ale. I'm finding much more educated palates in Lakeview than I thought we were going to have. People understand craft beer, they're embracing it, they love it, and they want some of the more eclectic brews and that's what we're giving them.
GS: It's also worth noting that we opened in June and we brew to the season. So if you come in June or July, you know we'll have a Hefeweizen, and a Kölsch, or a Dortmunder, as Brant was describing. And mid-December is when you'll find imperial stout.

What was it like when you first opened?
BD: It was chaos. It was overwhelming. We definitely were, in my opinion, not ready for the types of numbers we did, especially from the beer side of things. It was really difficult until we got into our brewing groove to keep six beers on. We were constantly running out of beer, but now we're in that groove and we're just as busy as we were at opening.
GS: Yeah, a week after opening, we had to close our kitchen for three days because we completely wiped out of inventory.

Were people just flooding in when you first unlocked the door?
GS: We had done a lot of activities to make people aware of what we were doing ahead of time and so as soon as we opened the door, and for the following three months thereafter, we were just packed. December was the slowest month we've had since opening but May was just as busy as opening month last year. And we have a little bit more staggered seating with our patio now, so the patio has definitely helped as far as being able to control it a little bit more. There's not three-hour waits for tables—except once in a while on Saturdays.

How big of a part of the concept was the food going to be in the beginning?
GS: At the very beginning of this project, we didn't want to do food at all. We eventually segued into the realization that the food component was necessary in Chicago just to be able to get through the various legal hurdles of opening a brewery. So when we first started, we were thinking, "what is the bare minimum that we can do from the food side and still meet these various legal obligations?" We started to explore these small food trends like grilled cheese shops and taco spots or sausages, and we eventually got really bored with that because none of us really eat that way or seek out those types of spots very often. So we decided that if we're going to do food, we should probably do food as well as we can and ideally better than most people in the brewing industry are used to doing.

What kind of changes and progress has been made in the food and kitchen aspect since then?
GS: Once we embraced it and realized that's what we'd be doing, it became a very serious portion of this project.
BD: We set out to do all the right things with the brewery and we wanted to put our all into the brewing aspect and I still remember the day that Greg came into the office and we were working on the taco concept and the sausage concept and it was like a light switch got flipped. He came in and said, "listen, we're doing the brewery thing with all our heart and soul—we gotta do the restaurant thing with all of our heart and soul and put 100 percent effort into it." 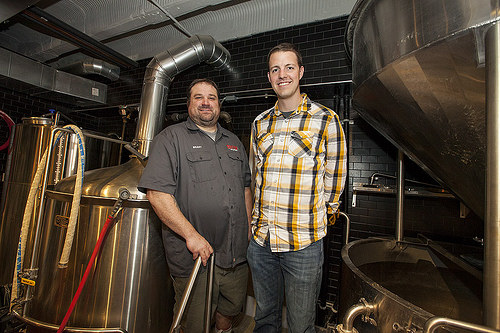 And you made a chef change along the way too. Were these changes just a natural progression since the opening?
GS: Yes, I would say it was a progression. I don't come from much of a kitchen background, it is the area of this business that at the beginning I was most ignorant about. So we wanted to bring someone on board who knew a lot about what it took to really put a kitchen together and a really attractive menu and be able to operate that and that's how we started working with our first chef (Pete Repak). We gave him a lot of control over what it was going to be and we started working really closely with him.

Since then, what changes have you made to the menu?
GS: We reduced the number of items that we were trying to put out. We started out with a really ambitious menu with a lot of items with a lot of different components. We had a lot of operational challenges with the initial menu we put out and that has probably been our biggest learning curve—limiting it to things that we can consistently execute.

What are you working on for the future at DryHop?
BD: On the beer side of things we did a Goose Island collaboration of a sour ale and it was extremely well received, so we're going to start implementing a little bit of a sour program on a quarterly basis and some barrel-aging. We also are changing our menu on a seasonal basis; I've been working with chef Joel (Pillar) on tailoring beers to work around the summer menu. Also, we're going to start doing some more lagers.

How about from the operation standpoint?
GS: Things at Dryhop have gotten fairly stable, I'd say. We've kind of maxed out what we figured what we could put out of our brewery and our kitchen, so I'm starting to turn my attention mostly to finding a new project altogether to work on.

A beer thing?
GS: It would be a beer thing. My objective has always been to try and open up unique brewpubs so I'm starting to work on a new brewpub concept for the city.

How far along is it?
GS: We've negotiated for a couple of locations. I'd rather not say where yet, just because I'll feel bad if it doesn't come through.

How has the growler to go business gone?
BD: It's been really well received. It was a huge component of Greg's original vision for Dryhop. It was kind of hard for us to offer the pint aspect without a kitchen, so that's why we sort of evolved into the brewpub concept. We want people to open up their cabinet on a Saturday night and see a DryHop growler and say, "hey, I gotta go get this filled" or "hey, I gotta go grab a cheeseburger at DryHop."

Do you think that the craft beer boom is going to slow down or keep going like this?
GS: Personally, I think it's going to keep growing. There's a lot of opportunity for small and medium-sized breweries to do well now and continue to grow and do well as the culture shifts towards craft and slow food and locavore. And craft beer is just a really great way to experience it at a cultural level. So it'll continue as long as people still like local.
BD: Chicago's a city of three million people just living in the city itself and we probably have about half the brewpubs and breweries that Portland, Oregon, a city of 300,000 has, so Chicago's primed and ready for craft beer. And I think we're doing it really well, we're not particularly sticking to one style.

Is there anything else you're working on?
BD: It's a boom time to be involved with craft beer and the community has been outstandingly supportive of us, both Lakeview and the city, and it's time for us to start paying it forward. We're looking forward to doing several collaborations with some new up and coming craft beer bars and breweries. It's a great time to be in Chicago for beer.
· All DryHop Brewers Coverage [-ECHI-]
· All One Year Ins [-ECHI-]