Share All sharing options for: Doug Sohn on the Hot Doug's Lines and How to Get in Before Closing Day 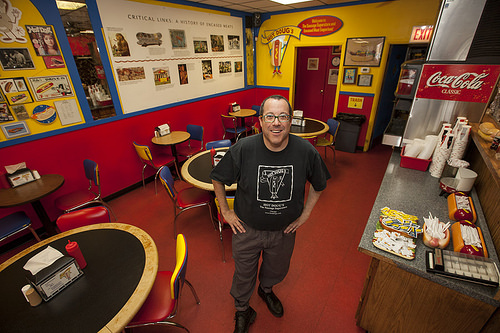 Hot Doug's was always nearly as famous for its uber-long lines as it was for its hot dogs, but now that owner Doug Sohn announced that its closing in October, those lines have grown to dizzying lengths. Sohn chatted with Eater about how much longer they've gotten, his favorite stories about the lines, and the best ways and times to get in before he closes Hot Doug's for good.

So, has it been busy?
Things are insane. My advice for anybody's business: if you want to goose it a little bit, just tell people you're closing, because they show up in droves. But it's great. My favorite are the people that have never been here before because the line was always intimidating…and my thinking is, so you come now? When the line is literally three times longer than its ever been? The Saturday of Memorial Day weekend, the line when I opened the door was four hours.

Are you going to expand hours?
People sort of forget that it's a small restaurant. It's a small staff. We only seat 45 people. I'm hoping, if it calms down slightly during the summer or it's not a brutal summer, then it'll be okay. But for right now, we're sticking with 4:00 p.m.

Do you ever worry about the people waiting in line?
I'm flattered and I like to think it's a good restaurant and the experience is a positive one, but you need to gauge for yourself the risk involved. Two summers ago when it was brutally hot, everyday we'd have the hose running, we'd go out there every half hour and tell people, "please be careful. Fluids." We've had people go down in line and ambulances called. And when people say all publicity is good publicity, having an ambulance with its lights going in front of your restaurant for an hour—not good publicity.

Someone who's built like me, I can go without food for a stretch. But a good number of our customers who tend to be thinner, possibly paler, maybe not as hearty of an appetite, you're going to crumble. And I've seen it happen. So I'm hoping it's a relatively mild summer. 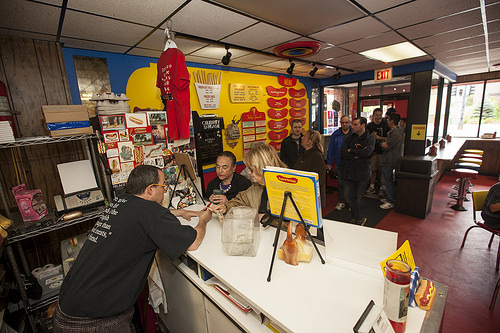 Do you remember the first time you looked outside and thought, "wow, there's a lot of people out there"?
It happened a tiny bit at the old store (in Roscoe Village), but when it really happened was a-year-and-a-half into it when we got in the Sun-Times; the late Pat Bruno picked us as the best hot dog in Chicago. At 2:00 or 2:30 p.m. we were out of food and had to close down. And that was the only time that happened. Looking back, the line wasn't that long comparatively, but I thought "oh my god, that was insane!" So we were better prepared for it when we moved.

At the new store, I mean the first day, when we announced we were opening and sent out a notice saying "please don't everybody show up at once," and of course nobody took that advice and we had a line out the door. But again, maybe 40 minutes? It became much more so with the Anthony Bourdain (TV show "No Reservations" feature), that's when it was immediately like, "oh my god, people, lines." But you get kind of used to it.

What were the craziest happenings outside?
Actually, one that just occurred a couple of weeks ago. It's still cracking me up and I need to follow up on this. A father and son get to the front of the line, an older son in his 20's, and they order and the father looks a little dazed.
I ask, "for here or to-go?"
And the father goes, "oh, we'll have it here."
And the son says, "we have to go."
And the father says, "oh, what time is it?"
I look up and say, "it's 5:00."
He's like, "oh, yeah, we have to go. We have dinner reservations at 5:30."
And I was like, "where?"
"Alinea."

And I just died laughing. I was like, "here's what we're going to do. One, I'm going to throw in an extra one for Grant (Achatz). But my advice is, don't eat this but when you get there, give it to them or your server. Tell them I said they need to plate this, preferably on the end of a pin. They'll think it's funny." And the dad's like, "oh, I can't do it" and the son's like, "oh, I'll do it!" So I have to call up and see if they did it or not. I'm thinking, "at what point do you decide, you know, maybe we should just…go to Alinea?"

That's been hands down my favorite story since we announced the closing. I sort of understand the dynamics, but I have never been out there doing it, so a lot of those stories and a lot of those things I hear are either much later or not at all. 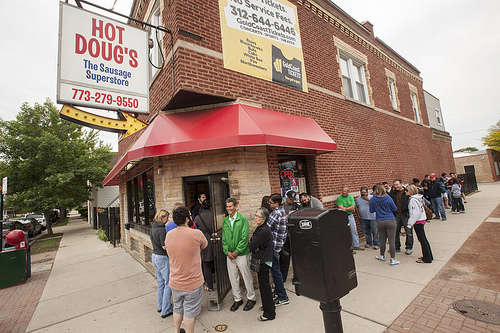 The other day there was a guy with an ice cream cart selling ice cream to the line.
There's a Good Humor truck that stops every so often, especially on the weekends, and the first time that happened, a young man who works at the front of the line came up to me and says, "do you want me to ask him to leave?" and I say, "well, is he selling hot dogs?" And he's like, "no…" So I say, "leave him there." I give him all the credit in the world for figuring that out, and customers are a lot less cranky when they get to me if they've had a cold bottle of water.

Has anyone ever offered cash or gifts to skip the line?
Uh, yes. My favorite one, and I turned it down, offered up a bottle of Three Floyds Dark Lord. They'd gotten it that day, come to the line, and was offering to bypass the line. I was like, "that was clever, I'm impressed, but no." The only time we've offered it was last summer—you could have skipped the line if you brought in the Stanley Cup after the Hawks won. We sent that out via Twitter and Facebook. Once, years ago, post-4:00 p.m., someone tried to slip me 10 bucks and I tried not to stifle a laugh. 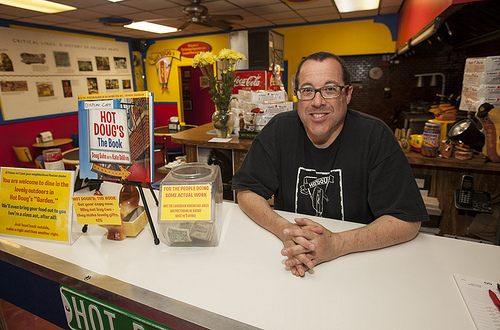 What celebrities have come in?
We get calls once in a while from the hotels and my response is that they're more than welcome to come up, but my feeling is (celebrities) are going to come once. I've got people who come every Monday. They wait in line. We turn (celebrities wanting to skip the line) down and if anybody complains, well, Anthony Bourdain waited in line, Mario Batali waited for almost two hours once and he's been in a couple of times and always waited in line. But if it was Kate Upton and she was just going to sit on the stool behind the counter with me for a few hours...okay, then you can skip the line. Well, if my girlfriend is reading this then absolutely not. That's crazy talk.

When is the best time for people to get in?
During the week is still better than Friday or Saturday. Other than that, just know there is a possibility for a really long wait. Don't complain to me; I've been standing there for 14 years waiting for you. Just know that it's going to be crowded. Physically, this is how many people we can do in an hour. That can't change. Or (come in) a little while before we open, if you don't mind having hot dogs at 10:30 a.m. Any time is sausage time if you ask me. I did have one customer who said, "I've never had dinner at Hot Doug's" because I was taking his order at 6:15. And I was like, "there you go, something new."

What are the percentage of people who know you when they get to the front?
Now it's lower but it's still pretty darn high. At points it could have been like 20 percent. But it's so nice to see a familiar face; I know they're not going to ask me how to order. It works like every restaurant in the world: there's a menu, you're going to ask for food, we're going to cook it, you're going to eat it. It's how these things work.
· All Hot Doug's Coverage [-ECHI-]
· All The Gatekeepers [-ECHI-]

The End Is Here for Hot Doug's