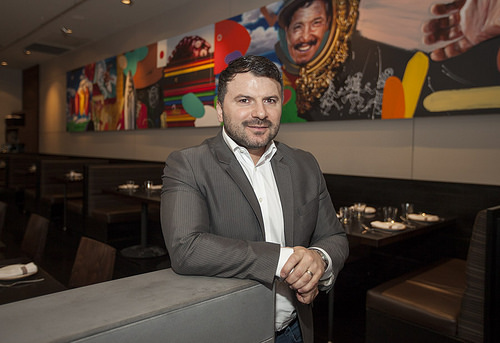 Chicagoans took note when famed chef and ambassador of Peruvian cuisine Gaston Acurio decided to open his first restaurant in the Midwest, Tanta, in River North last year. An Eater award and glowing reviews followed already palpable buzz and crowds to make primetime reservations scarce, although the rooftop pisco lounge and brunch service, both launching this week, should make it a little easier to get in.

General manager Tomy Lokvicic, a Chilean immigrant who cut his teeth at Charlie Trotter's and the Elysian Hotel, oversees the front of the house and the books at the hotspot. He chatted about the scene, how to get a reservation, and just how busy Tanta is.

How busy has Tanta been?
It's been very very busy since we opened. We didn't feel the winter so much; we did have troubles, but we still filled the restaurant and haven't been slow at all. We didn't know what to expect, being a newly opened restaurant, new concept, new cuisine in the area (but) we do have a great chef behind us, Gaston (Acurio).

If two people come in at 7:00 p.m. on a Saturday, how long would the wait be?
About two hours. I'd tell them that the bar seats move faster than the tables. We do have a pisco lounge open every Friday and Saturday, but now that we're opening the rooftop, the lounge will be open every day. So if you want to wait upstairs, we don't offer the full menu upstairs, but we do have a pretty traditional menu upstairs and we have the same cocktails and beverages up there as well.

Do people offer cash or gifts for a table?
I haven't seen a lot actually. People always say "we're a fan and know chef Gaston," that's the most popular comment when people try to get a table, or "I'm a friend of the owner." We try to accommodate everybody the same way and get them seated the same way. Not because you're pretentious about it. 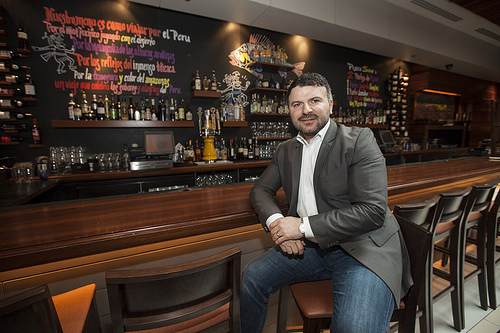 Are customers mostly from the area or traveling in?
The majority is River North clientele. Earlier (in the night) you have older-aged people, after 7 p.m. you have River North businessmen or young people that live in the area. You do have the people who want to have a nice meal before they go to a club or before another bar; (it's a) very very lively and high-energy restaurant.

Have you ever had to tell people to calm down a little bit?
We had a couple of situations where people got overexcited but besides that they all come to have a good time. The first few months we used to have a family day for Latin people. People travel seven-to-eight hours just to come here to eat. That blows my mind and we really appreciate those people.

Do you get a lot of celebrities?
We've been having more and more the last few months, more of the sports players and TV anchors and a couple of actors here and there. Bears players, Hawks, Bulls.

Do any have their own table and get to know the staff?
They just like to swing by, walk-in (with) no reservations and we try to accommodate them. They mostly sit at the bar.

When you're not at Tanta, where do you like to go?
Usually after a long day I have one drink and then go home. The Berkshire Room, I usually get one drink, I love what Benjamin (Schiller) does, he's a great guy and I like to support local people from around the area. For eating, I like to visit old friends around the properties I used to work.

Any other advice for getting a table?
It's easier to come in between 5-5:30 p.m. or after 9:00 p.m., the kitchen is open until 11:00 p.m. during the week and midnight on the weekends. The rooftop will be open seven days a week. We have high expectations for our rooftop, it will match what we're doing in the restaurant.
· All Tanta Coverage [-ECHI-]
· All Gatekeepers [-ECHI-]