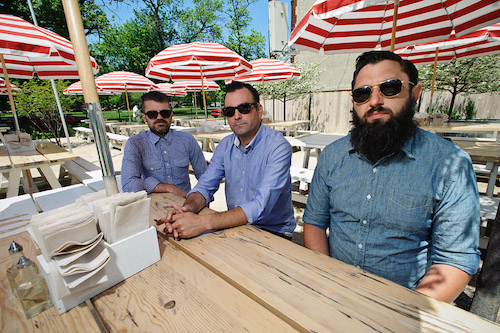 So many facets of Parson's Chicken & Fish went against the grain. The preliminary announcement came via TV, just two months before opening. The layout is 90 percent patio space—in a city with around five months of patio season. A mascot—that's a car. An unannounced opening where 250 people showed up.

Parson's then became a mob scene all summer long, as the patio was a tornado of fried chicken, negroni slushies, Chooglin', and people—even Mike Sheerin came to help out. But over the polar vortex winter the massive 285-seat patio became unusable—making Parson's merely a four-table shack—giving Land and Sea Dept. (Longman & Eagle) a chance to reflect, tweak, and prepare for this summer. Partner Peter Toalson chatted about the scene last summer, the winter transition, and what's new at Parson's this year.

How was the first year?
It was great. It was challenging. It was instructive, we learned a lot. And most of all, it's been really fun.

What was challenging?
It's a challenging property. We were hit pretty hard with crowds from day one. We opened in May and then in October we quickly transitioned from a nearly-300-seat restaurant to a 30-seat restaurant and conversely this spring we had to go the other direction. One of the challenges is it's hard to maintain consistency—consistency is how you define success in the restaurant industry—and its hard to establish a consistent rhythm when you're changing 50 staff one way or the other.

What was the process like of sorting through this concept leading up to the opening?
Up to the opening we felt pretty good about what we had; we liked the location and we built it to work in a way we knew the kitchen could accommodate. On the very first day, we didn't even announce that we were opening, we just turned the lights on at 5 p.m. and by 7 p.m. there was a line down the street and we ended up having over 250 people. Having enough chicken and product left at the end of every day has been a real challenge for us.

How crazy did the crowds get throughout the summer?
We were doing upwards of 700 covers a day in terms of diners, and we have a lot of people that come in for drinking and hanging out too. On any given Friday or weekend day anywhere between 1000 and 1500 people come through the space from open to close.

Then fall comes and you have to close the outdoor space. What did you go through then?
It's always a tricky thing with any sort of patio service, as any Chicagoan knows, because the weather fluctuates so rapidly. From a staffing perspective we kept staff on as long as possible but it's tricky logistically.

What was it like to go from cranking out all that product and people to just four tables in the winter?
We do a smaller menu in the summer because of the volume. But it's nice from a creative point of view for both (principle bartender) Charlie (Scott) and (chef) Hunter (Moore) because when we scaled down, their menu expanded. We added brunch, added carryout, developed some new cocktail initiatives, and that was really fun and well received. Lucky for us the neighborhood responded and we were pretty busy throughout the winter.

Was all that summer business like a squirrel storing nuts for the winter?
(Laughs) It's very much like a pioneer mentality. That was very much our thought process. We were fairly certain we could maintain profitability at the four-table level and we were pleased to see that we could, but to be honest we just didn't know. 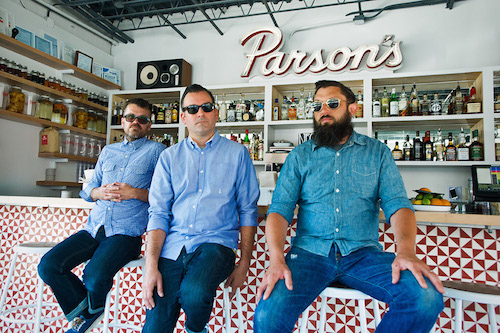 What did you learn?
Launching in May gave everyone the impression that Parson's is a huge patio party spot, which indeed it is, but a lot of folks didn't know if we would be able to maintain hours in the winter. The winter proved that there was enough support from the local community and beyond to make us a relevant restaurant all year round.

How many negroni slushies did you sell?
I don't even know off the top of my head but a lot. It's pretty ridiculous. That was something that was really important to us—how can we use these same purveyors that we deal with at Longman (& Eagle) and do it in a way that's a little more accessible.

Any new drinks in the works for this season?
Charlie did a really great job of working through a fantastic dark and stormy slushy recipe that's been really well received. He did a really great "greenie meanie" cocktail in the winter. Some of the things that were cold weather favorites, he's figured out ways to transition those over to warm weather drinks and various slushies.

Are you still going to change the configuration or add more seats?
We're working on that. We are in a landmark district, meaning we're on the boulevard, so any changes in build out or additions fall into their jurisdiction so it slows things down a little bit. We spent time last fall trying to get consensus on design and in the end we just couldn't get it done in a timely enough fashion to not interrupt patio season this year. But I'm sure we'll find a consensus at some point.

Do you guys ever take that El Camino for a spin?
It gets driven from time to time. My partner and I drove it to the suburbs to pick up our neon sign, for example. That was a tricky one for us, chicks were jumping in the car left and right and we were trying to keep them at bay. We actually stopped at a bar and had a beer with the neon sign in the back. The El Camino has been very well received; various iterations of party-time posing has gone on around that thing.

What's coming next at Parson's?
We're really working hard to meet the demand and get more consistent; boring operational stuff. At the midpoint of the summer we were on waits of up to three hours and by the end of the summer we were down to an hour and a half wait. We also made some structural changes to the layout; we're doing food on the back patio now and added a more comfortable drinking and waiting area up front.

You've got the ping pong table, any chance you'll add a foosball table?
We were just talking about this, it seems that Chicago is really embracing drinking and gaming. We launched a Monday bocce league with the Wicker Park bocce club, an industry league at 2:00 in the afternoon. Things like that have been really great so we're definitely looking at doing some different things with the space. We know we're what doing now so we can be a little more creative with it and have more fun.
· All Parson's Chicken and Fish Coverage [-ECHI-]
· All One Year Ins [-ECHI-]