Jason Vincent OUT at Nightwood; Sous Chef Shae Daher to Replace Him

Share All sharing options for: Jason Vincent OUT at Nightwood; Sous Chef Shae Daher to Replace Him

Vincent has helmed the restaurant's kitchen since it opened nearly five years ago as a trailblazer for Pilsen dining. It gained Michelin Bib Gourmand awards in 2011 and 2012 under his watch, among other accolades.

Although Vincent says he "he has a couple irons in the fire" he says he based the decision on the upcoming birth of his second child, which he explains in a statement below.

i have good news! my wife is starting to feel really uncomfortable and she doesn't fit into any of her clothes! sorry, i guess that's not really the good news.... the good news is that our second daughter is due on june 11!! there, that's more like it.

i also have bad news...and, believe me, there are a lot of emotions that come with a decision like this one. emotions that i didn't know i was capable of (don't forget, i'm a chef, and we're all assholes). after five incredibly fulfilling years, i'm stepping aside as the chef at nightwood. part of me is sad, part of me is happy, another part (the part that i didn't know i had) is grounded. nightwood is going to continue on the same course even after i'm gone, and i'm more than ok with that. it's not about the cog, it's about the wheel...and the wheel is still perfectly round. the whole machine works.

for me, the immediate involves changing a lot of diapers and watching the indians win the world series (we'll see which hand gets full first, amirite?!)

as for the people that came through the back door, all of the employees, purveyors, farmers, family, i consider every one of you my friends and i'm looking forward to knowing you for a very, very long time and working with you again.

to the people that came through the front door, the customers, the family...i'm glad you did, do it again...they will take care of you.

thanks everyone.
see you soon.
jv 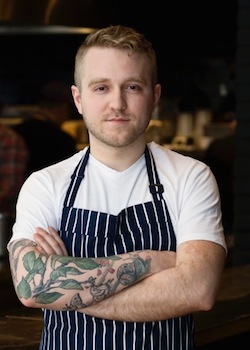 The restaurant has also submitted a statement thanking Vincent and saying in part that "under chef Daher, the team will continue on its mission to build a great neighborhood restaurant in Pilsen, with carefully sourced ingredients, old school technique, and a focus on simple, thoughtful fare."

The statement also says that "no additional staff is leaving" and that there are no conceptual changes in the works.