Chef David Dworshak on the First Year of Takito Kitchen

Share All sharing options for: Chef David Dworshak on the First Year of Takito Kitchen 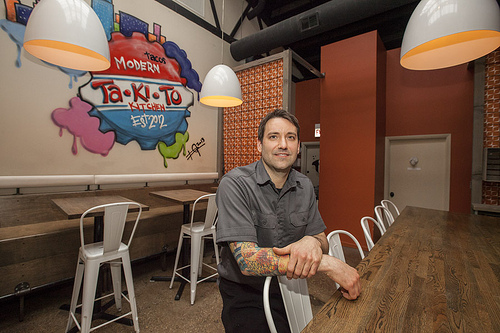 After eight years at Carnivale, David Dworshak was looking for a change. He signed on as opening executive chef at the modern taco and cocktail spot Takito Kitchen, cooking untraditional tacos with seasonal ingredients in a small, trendy space among a strip of bars on Division Street in Wicker Park.

With one year in the books, Dworshak feels the concept is hitting its stride. The Florida-bred chef took a break after working the line at lunch to talk about changes in the first year, how the neighborhood is accepting the concept and his style of tacos, and expansion plans.

How has business been?
Business has been good. It was a really rough winter for everybody but our business has been steady and on the rise now. The weather is turning and we've found out that there's a lot of people who still haven't even heard about us. So we're still getting our name out by word of mouth to keep growing.

Has it hit personal expectations for you?
I had no idea what to expect because I knew it was going to be a world away from what I was used to. I was kind of looking forward to that because I was ready for any kind of change. It's been all over the board—opening a restaurant is such a roller coaster, sometimes you don't know what's going to happen until you get in there and start putting food on the plate. But it's been exciting and thrilling.

How do you feel the restaurant fits in over there? A lot of that area is known for bar hopping.
It's a little weird. I think for people in the neighborhood it's a huge sigh of relief to have someone like us. Sometimes the beer-chugging bar-hopper comes in and they don't really get it, but as far as the neighborhood goes, they've been really enjoying it.

You guys have made some changes, adding a late-night menu and then lunch. What have you changed in general and has it helped you?
In the beginning we didn't even have a closing time; the hours said 5 p.m. until late which was very confusing for people. We were hoping that it would be an after hours scene for people. But the fact that we don't have a bar to sit at is a hindrance and maybe the neighborhood has different expectations for late night. So then we started closing at regular restaurant hours, 10 or 11 p.m.

Then some of the partners were pushing to do lunch and I didn't want to so we figured we could give (a late-night menu) a shot if we had more of a P.R. push. It didn't really work because of the winter time so then we tried lunch. I think we're still waiting for that summertime traffic to take off. Our weekend brunch, we started doing that before lunch and that has seemed to have a better draw from the neighborhood.

Your style of tacos are not traditional Mexican. What has the feedback been?
If you're looking for the free chips and salsa and your standard steak taco, and they see our prices are a little higher than the average taco place, some people are like, "Whoa, where are the tortillas chips, what's going on here?" And I knew the neighborhood, you have places like Big Star, Antique Taco, places that are doing great tacos. Even the down and dirty Mom and Pop places are doing really great tacos. I'm a gringo, I don't have a drop of Mexican blood in my body, but I've studied Latin food for years and I wanted to do something very different and I did. I took some risks, I took some chances, a lot of people have really enjoyed it.

How often do you change around the tacos and introduce new ones?
We change about eight times a year, seasonal changes and other additions. There are a few core items that people have grown to love, some items that have become our signature dishes that we want to keep the same, but a lot of the accompaniments and garnishes will change along with the side dishes and starters. Coming up in spring will be one of our bigger menu changes, so I'm excited.

What are the new menu changes?
There are a few. I'll put a second ceviche on. I'm going to change a couple of the sides, do the classic spring things like asparagus, ramps, rhubarb, strawberries, but interpret through a modern Mexican lens and have fun with it that way. 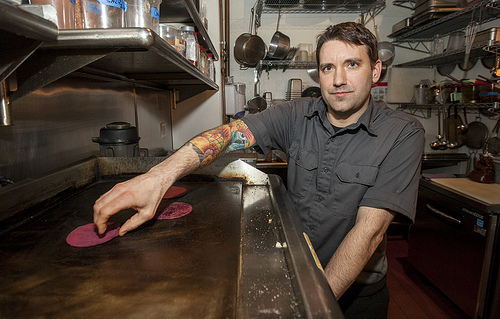 What has been the feedback on the cocktails?
I think people love our cocktail program. One of our partners, Adam Weber, him and I are really really close and bounce ideas off of each other all of the time. We only use fresh squeeze lime juice every day and will throw out if it's one day old. We only pretty much have Tito's, South American rum, we don't really have whiskey or a lot of things people throw around. It's kind of challenging for him but I also thing he does a fantastic job. I'll do a base ingredient for him in the kitchen and he'll make a drink with it.

Is this the type of food you envisioned yourself doing after Carnivale?
I was very open. There's probably five or six types of cuisine I'm comfortable doing. I never thought I would be doing this, honestly, but I got to know the concept and I knew they were open to chef creativity. They allowed me to use a lot of global and local ingredients in my food so I knew I could make it work. One of the other reasons why I partnered here is because they want to do more than one restaurant with more than one type of food.

Did you do anything to celebrate the anniversary?
We are talking about having a late-night dinner and cocktail party, probably on a Saturday or Sunday night. A lot of it is to give a big thank you to our loyal customers, regulars, friends, and family. We're going to put it out to the public soon; it's probably going to be in late April.

How does it feel to have one year in the books?
It's really encouraging and motivating. If you're at a place for a long time you're going through the motions and getting through it. The restaurant has such powerful wings of energy that will give us future projects, that is really great.

What else is coming up for the horizon?
I'm ready to explore other Latin cuisines in future projects. I'm a huge fan of Caribbean, Peruvian, Central American countries and styles of cooking, I'm really excited to incorporate some of that and get away from being all tacos all the time. Obviously the new project is our biggest thing: Creating the menu, creating how we want it to feel, look, and the type of food. It's very exciting.

You have a history of sticking at a job for a while. Is this something you think you're going to be with for a long time?
Yes, definitely. It's a great team, four partners, and we work well. Having an open kitchen has changed a lot for me, that exposure and being able to run food to the table and touch base with the people kind of changes the way you perceive service. It's definitely refreshing.
· All Takito Kitchen Coverage [-ECHI-]
· All One Year Ins [-ECHI-]