In honor of Pizza Week, we asked some celebrity folks who grew up or spent significant time living in Chicago how they feel about non-Chicagoans' dismissive attitude towards deep dish pizza. 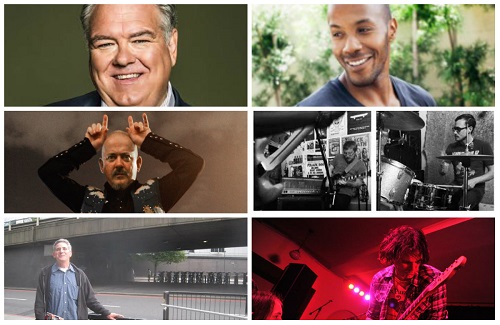 Scott Lucas grew up in Zion and now resides in Chicago proper — Lucas' band Local H (with new drummer Ryan Harding) have tour dates scheduled in April and May (including a benefit show on May 17 at Double Door), but first up is a solo acoustic show at Chalk in Forest Park on March 29; actor Jim O'Heir, who hails from suburban Lansing and plays inept government employee Jerry Gergitch on NBC's Parks and Recreation; legendary musician Jon Langford (The Mekons, The Waco Brothers, and many more) was born and raised in Wales, UK, but has lived in Chicago since the early 1990s; Rob Miller is co-owner of Chicago's Bloodshot Records and has lived in Chicago the past 23 years; Donovan Corey Lyons previously played guitar in Millions and is now in the post-rock trio La Forge (the band is readying an EP for the fall) — Lyons has also hosted pop-up dinners; McKinley Freeman is a Chicago native who graduated from Champaign's University of Illinois with a bachelor's in finance and can be seen on VH1's basketball drama, Hit the Floor, which returns for its second season on Monday, May 26.

Non-Chicagoans have been notoriously dismissive about Chicago deep dish pizza — where do you stand on the issue?
Scott Lucas: I just had some deep dish from Pequod's last night — and if you can't appreciate the level of genius and beauty that comes out of that pizza oven, then I don't know what to do for you. It's all I can do not to call you a fucking idiot. I understand the blind pride that would cause a New Yorker to be a denier, but I have special ire for those Chicago turncoats who pretend that a well-made deep dish pizza isn't a thing of wonder. I love me a New York slice. Wake up and recognize!

Jim O'Heir: As a pizza snob I can tell you that non-Chicagoans are sadly misinformed about the awesomeness of deep dish pizza. They're so accustomed to the traditional thin style pizza that they're depriving themselves of the THICK filling and amazing crust. I first became aware of deep dish when I was in high school and we would hang out at a place called Aurellio's (located in Homewood). After I moved to Wrigleyville, I became obsessed with two different deep dish pizzas — Lou Malnati's and Giordano's. I still have Lou Malnati's delivered to my home in Los Angeles.

Rob Miller: I am a native Detroiter and have never taken to either the deep dish or the cracker crust despite 23 years of harassment and ridicule from prideful natives. (Those square slices with no crust in the middle? C'mon, who wants those? Exactly. Nobody). Perhaps it is an aesthetic or technical issue. Call it a casserole and I'm on board. But pizza? Methinks not. A slice of pizza should not require so much cutlery, a strong plate and carry the weight of a dwarf star.

Donovan Corey Lyons: I'm definitely in the 'it's not pizza, it's cheese casserole' camp. I pretty much only eat it if it's free and I'm broke, or if friends/family are in town and want to eat it. I don't understand why anyone would want to ingest that much cheese in one sitting - and I love cheese.

McKinley Freeman: I LOVE deep dish pizza! Who doesn't like a good deep dish pizza?!? I remember the first time I had a thin slice of pizza in New York, and I thought, 'this can't really be the pizza that people think is better than Chicago's.' I love that deep dish pies are made from fresh, pressed dough, so you can enjoy the toppings and the actual crust of the pizza.

What are your favorite pizza places and what do you usually order when you go there?
Scott Lucas: Pequod's is the king. Deep dish with caramelized cheese crust. I usually go with mushrooms, spinach, and black olives. I'm also a big believer in extra sauce. Nancy's on Broadway makes an awesome stuffed pizza with eggplant. Dante's makes a damn fine big-slice thin crust pie. Paula & Monica's has a killer thin crust — best slice around. But Marie's Pizza & Liquors probably rules the roost when it comes to thin crust. I think everybody knows that. Chicago can crush it when it comes to just about ANY style of pizza, and that's where we've got it over New York. Just as long as it's not Piece. Now that stuff sucks.

Jim O'Heir: When in Chicago I will always go to Aurellio's and Lou Malnati's. They've kept their recipes the same and I love everything about them. As I sit here writing about it I've decided to pop in one of my frozen Lou Malnati's for dinner.

Jon Langford: There's a great little place at N. Western Avenue and Winnemac called I Monelli that does delicious things with potatoes. (The) patate e rosmarino pizza is the way to go.

Rob Miller: If I can say this without coming across as too snobbish, visiting Italy a few times has ruined me on pizza in Chicago. That said, I am fond of Spacca Napoli — arugula and prosciutto, baby. The Pizza ART Cafe on Rockwell — their home smoked speck is a treat. Both traffic in traditional brick/stone oven style. If pressed, though, my favorite deep dish is Nancy's on Broadway — sausage and broccoli.

Donovan Corey Lyons: Dante's is definitely my favorite in town right now, I just get the plain cheese. I also used to really like Cafe Luigi in Lincoln Park, but I haven't been there in years. If I have to get deep dish, I go for Art of Pizza and get it with giardiniera.

McKinley Freeman: I hit up Lou Malnati's, Giordano's and Papa Del's down in Champaign. I always get pepperoni, sausage, and the occasional green pepper. I ask for light cheese most of the time because the mound of cheese can distract you from the flavor in the pizza if there's too much of it.
· All Pizza Week 2014 Coverage [-ECHI-]