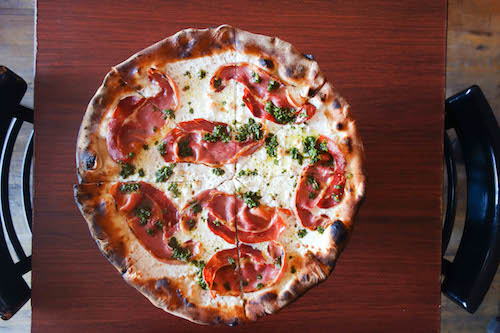 When La Sirena Clandestina chef John Manion decided to mastermind a pizza for Pizza Week, he teamed up with one of the most acclaimed pizzerias in Chicago—Coalfire. Manion's creation, which he's calling the "El Diez," is based on what he calls "the king of the empanadas world," jamon y queso.

"The good men at Coalfire and ourselves have a long tradition of the old pizza-for-empanada trade," he explains. "I know for a fact that they chug chimichurri like it's a frosty-cold beer."

Manion's pie is built on Coalfire's dough. He adds extra virgin olive oil, Coalfire's secret low-moisture mozzarella from the East Coast, and Neuske's smoked ham. After a stint in the 1300 degree coal-fired oven, it's finished a liberal dousing of La Sirena's chimichurri.