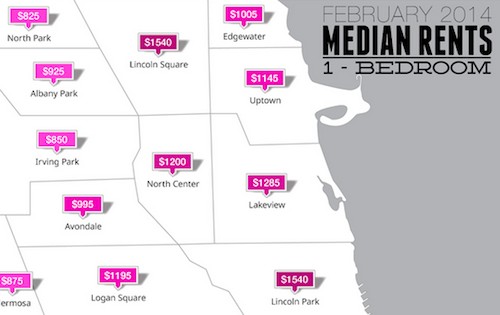 EVERYWHERE— Ever wonder how much it costs to rent an apartment in Chicago? Here now, Curbed Chicago takes a look at the cheapest, and most expensive neighborhood areas to rent one and two bedroom apartments in the city.

GOLD COAST— Billionaire and current CEO of Hyatt Development, Nicholas Pritzker, has listed his Gold Coast mansion for $9.995 million. The seven bedroom, five and a half bathroom mansion has become the third most expensive home currently listed for sale in the City of Chicago.

STREETERVILLE—The Chicago Spire is well on its out of bankruptcy, but construction of the supertall 2,000 foot project still remains uncertain. The construction site has remained untouched since 2008, and until all debts are paid, the Spire will likely remain a 100 foot hole in the ground.

SOUTH LOOP— Is this 40 story apartment tower coming to the South Loop? A new building containing 225 to 275 apartment units is planned 400 South Financial Place and Curbed Chicago has the scoop.