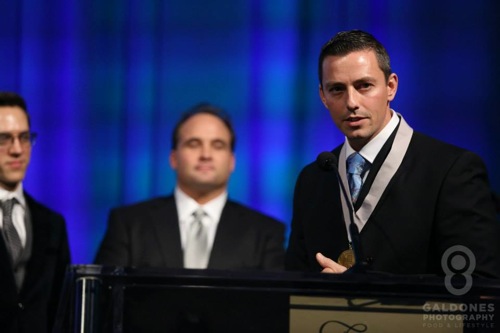 Friday night, at the Cystic Fibrosis Foundation's 17th annual Grand Chefs Gala/Jean Banchet Awards for Culinary Excellence at the Fairmont hotel, the majority of Chicago's culinary elite left their restaurants on a weekend evening to celebrate the achievements of the city's thriving restaurant scene.

Champagne flowed freely as guests munched and mingled their way through a cocktail reception featuring bites from a wide range of chefs, including Curtis Duffy of Grace, John Manion of La Sirena Clandestina, Armando Gonzalez of Libertad, Jimmy Bannos, Sr. of Heaven on Seven and Andres Padilla of Topolobampo.

The party then moved to the Imperial Ballroom where Michael Muser, partner and general manager of Grace, served as the lively master of ceremonies for the Oscar-style Jean Banchet Culinary Excellence awards ceremony. Grace was the clear winner of the evening, taking home nearly half the awards. The award recipients were:

This awards year also saw the passing of an incredible talent who was beloved by the culinary community, chef Jean Banchet, the man for whom the awards are named. To celebrate his life and achievements as a friend, mentor and pioneer in the restaurant industry, chef Jean Joho gave a heartfelt tribute followed by a few words from his widow Doris Banchet who was also in attendance.

Following the ceremony, a live auction filled with culinary prizes ranging from a private cooking lesson and dinner with chef Rick Bayless to dinner at Grace with the ladies of Check, Please! (Catherine De Orio, Alpana Singh and Amanda Puck) raised thousands of dollars for the foundation.

The revelry continued during the nightcap portion of the evening where Charles Joly of Aviary, Paul McGee of Three Dots and a Dash, and Justin Anderson of La Sirena Clandestina, amongst others, served up cocktails while guests danced, stalked the silent auction tables and sampled desserts from pastry chefs around the city.
· All Grace Coverage [-ECHI-]
· All Jean Banchet Awards Coverage [-ECHI-]