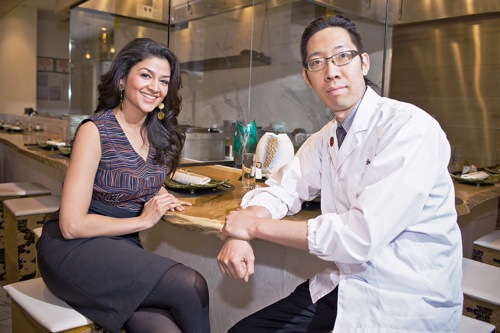 After seven years of working the robata grill at Japonais, Gene Kato and his wife Jessica ventured out on their own with the opening of Sumi Robata Bar a year ago. Their three-tiered project on Wells has garnered mostly positive reaction after some initial bumps and the husband-and-wife team's aspirations continue to grow. Gene and Jessica chatted about the concept, the first year, and what's on the horizon.

How has the first year been?
Gene: It's been great, I've learned a lot of things. (At Japonais) the job was delegated as far as financials, front of the house, beverage program, so a lot of those things I didn't have a lot of experience with. I think to be successful in this business is about managing those situations.

How long did it take you to learn those aspects?
Gene: Well I'm still learning. I'm a reserved individual and I like to give people the benefit of the doubt first so I got burned a few times and they ended up taking advantage of certain areas I did not have experience with. The more we depend on those people and when we lose those people, then we're in a difficult situation.

Jessica: It took us about two-and-a-half years to put together Sumi Robata Bar. A lot of our vision was to build something small and be able to grow. (Our) time was spent diligently to make sure that it was as sturdy as possible because our goal is to open up five different Japanese concepts in Chicago over the next four years.

Have your customers given you positive or negative reactions to the size and intimacy?
Gene: Robatayaki are very small. (Large parties) have reiterated on not being able to get a seat, but that's just who we are, it's what the restaurant is and we can only try to be as accommodating as possible.

Jessica: At first, people thought that the Robata bar was somewhere to just have a drink. Now that Chicagoans are familiarized with this type of dining, they are requesting dining at the Robata counter more so than a year ago.

It sounds like a lot of this first year was spent on educating customers.
Gene: Definitely. We get a lot of customers that come in expecting sushi and when we say we don't do sushi, they don't understand. So we have to explain the whole concept. 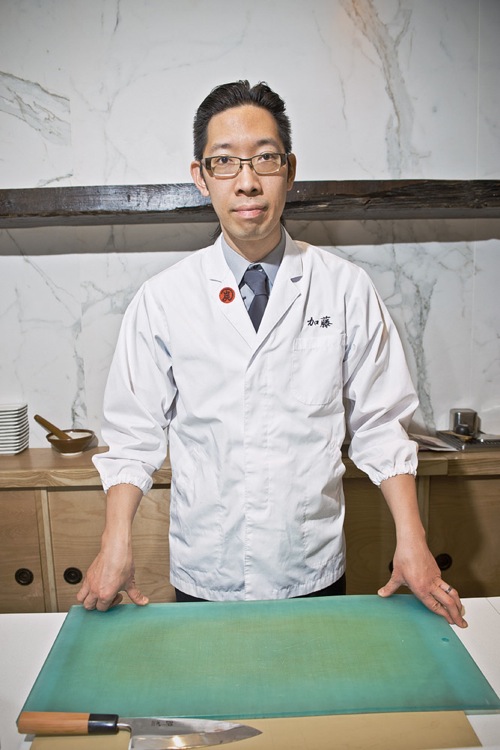 You're not the first Robata bar to open in Chicago, but you might be the best-received. What have you done differently from other places?
Jessica: Gene always knew that the Robata grill was an upcoming technical cuisine in the United States and what differentiated Gene was that he had this distinctive feature that set him before everyone else.

Gene: The one thing people don't understand is that I used Robata for a long time in Chicago. I featured it on the Japonais menu seven years ago. Sushi has had a long road for American (acceptance) and now you see it in grocery stores. But I always thought Robata was something the American man can relate to, because what Americans don't enjoy barbecue?

Is opening the upstairs space the next phase?
Gene: Correct, Our goal is next summer.

What is it going to be?
Gene: Its going to be really fun, lunch, mid-day, late-night, very casual. You place your order at the bar and then you get a ticket. I want to stay within our niche.

And you're opening four more restaurants after that?
Jessica: Three more.

What will those be?
Gene: We can't talk about that yet.

Did you have to change anything in the first year that you didn't expect?
Jessica: We had to change up the reservations we were placing in certain slots in order to ensure proper service and execution. We're so small that everyone places an integral part on being on cue. Off the bat I don't think we had it, but if you ask me now, we have it down. 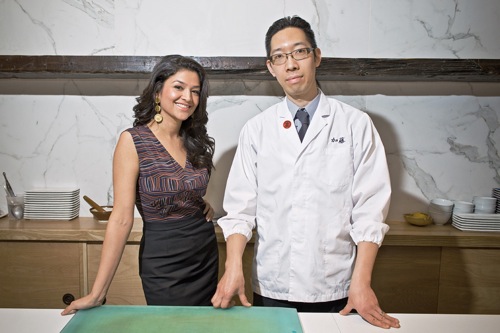 Your first reservation on your first day was a guy who put up a review of you on LTH forum. What do you think of that now?
Gene: You know, we thought it was crazy. He had every right to voice his opinion, but that was our first day, we had to work out the kinks and now Jessica, Justin (Romine, sous chef) and myself conceptualize the concept for everyday and are striving to become better. Without trial and error, how can you correct your food?

Jessica: I can laugh about it now, but at that moment, I did find it a little bit interesting after putting Sumi together in our living room for years. We did not have all of the resources or the manpower other restaurants usually have. At first I thought it was a disadvantage, because we didn't want to have a lot of people involved, but it's also made us that much stronger.

What were the resources and manpower you didn't have?
Jessica: We never wanted to go over our budget, we wanted to invest more on the products. I think if we were to bring in more people as management and given more responsibilities it would have been a lighter road for us. But at first, if you want it, there's going to be bruises, there's going to be cuts and many nights of worries.

After Japonais, how does it feel to be front and center now?
Gene: I have always been in the back kitchen so I don't always get to see the customer's reaction or see the customers coming in and out, and I have to say that I truly understand that the Chicago community appreciates the style I'm giving so much more now that I experienced it first hand.
· All Sumi Robata Bar Coverage [-ECHI-]
· All Gene Kato Coverage [-ECHI-]
· All One Year Ins [-ECHI-]