Share All sharing options for: Homaro Cantu on Ten Years of Moto

Homaro Cantu's Moto is celebrating its 10th Anniversary this month. Though Fulton Market is now one of the hottest dining areas in Chicago, it was hardly an ideal place to open a restaurant at the time. And, despite the restaurant being "a very negative environment" for the first year, Cantu persevered, gaining not only a national and international following but a Michelin star the past two years, in addition to numerous other accolades. Here, Cantu discusses Moto's beginnings, the restaurant's current status with recently promoted executive chef Richie Farina and muses about its future.

Can you believe it's been ten years already?
Yes, considering we almost closed nine months after we opened (laughs).

Can you talk about the sacrifices you made in opening the restaurant and in keeping it open for the last ten years?
The first four years I didn't see the light of day. For the first year, we were open six days a week, working from 10 a.m. until 2 a.m. And over the years slimming it down to one menu and becoming much more organized and efficient. And then the big thing in a restaurant is, once you're debt free, the creative flow just changes, everything changes. We're very fortunate to be in that world now.

What did you achieve that you weren't sure you would when you started out?
Our TV show was a big milestone, Future Foods. And the amount of talent that came through. Chris Jones, Ben Roche…I knew I wanted to cultivate a team that had loyalty. We really wouldn't have been able to make it this far without the dedication of people like that.

What is your first memory of Richie at Moto?
My first memory is that he applied twice to work at Moto. (His) resume was okay. I don't really care about resumes. Right away I could tell this guy could cook. But he took it to the next level. And then, just the energy. Have you seen the video where we follow him for a day? I mean, that's every day. I don't do that. I don't know anybody who does that. I think he's a better cook than I am. I wouldn't be able to do my next project if it wasn't for him being in that position.

Was there anyone who left the restaurant that you wished you could have retained?
All of them. The problem we had for many years is I couldn't expand as quickly as my talent matured. I always say I'm going to try and steal them back. I realized two years ago that a business is either growing or shrinking – there is no in between. I have no desire to do another high end restaurant. We sacrifice so much in this business for a James Beard award or a Michelin star, but the elephant in the room isn't each other. I want to compete with those larger entities that are part of the problem. Those franchise models with the commissary kitchens that don't produce good food. That's been my focus the last two years. 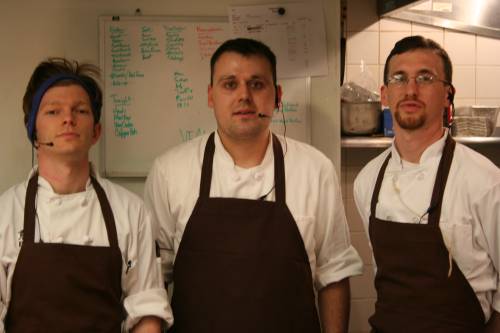 When did you feel you turned a corner?
I realized we're paying fuel charges, we got all of this stuff that we're wasting money on. For three years we tried growing algae in the Moto kitchen to see if we could produce bio fuel to burn out of our ovens. We always had this mindset of, can it be more efficient and more delicious at the same time? (Moto) was my opportunity to redo the whole thing. When you're talking about getting rid of sugar it's going to take a long time and a lot of perseverance. I'm eight years into this frickin' (Miracle) Berry and I'm just opening up the first sugar-free concept (with Berrista).

Do you feel that doors have opened as you've progressed or is it still a fight against the status quo?
The doors are definitely opening. 2014 will be the best year we've ever had. We have four projects on deck. Berrista and the cookbook are two, (and one of the other ones) is going to be very disruptive.

What are you most excited about as far as possibilities?
I'm excited to see where Moto goes, because now they have the ultimate playground. The R&D (research and development) team (for Berrista) will also be working on the Moto menu with Richie. We've cultivated a culture of innovation at Moto that has demanded from everybody…everybody has to come in with new crazy ideas every day. We're not looking for cooks. We're looking for creative gastronomic designers.

Do you have any regrets?
Yep. First year of Moto I fired a lot of people. It was a very negative environment and it was directly attributed to the way I managed. I carried that with me from previous experiences. Had I learned a better way to handle stressful situations I would have done it. But hopefully we're getting it right (now).