Share All sharing options for: Paul McGee Chats About the Crowds at Hotspot Three Dots and a Dash 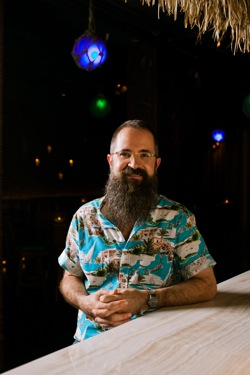 Since opening over a month ago, Paul McGee's Three Dots and a Dash is wasting no time in making up for a delayed opening of nearly a year. Since the first night McGee's staff started mixing tiki cocktails in the basement, before they installed a blue light directing River North drinkers from Clark Street into the alley, before they started selling custom tiki mugs, lines formed around the corner and spilled onto the street in front of Bub City. Those lines continue to swell.

McGee, ecstatic that his pet tiki bar project is finally open, chatted about those lines, the waits, dealing with customers ordering vodka tonics, and all things about his red-hot throwback underground tiki bar.

When does the line start to form outside?
It depends on the day but typically we don't have a line at all on Sunday and Monday. Tuesday we might have a light line of maybe 15-20 people. On Thursdays we'll get a line around 9:00 p.m., Friday we could have a line as early as 7:00 p.m. and Saturday it's usually around 8:00 p.m. We usually have a bit of a lull from 8-9:00 p.m. during the dinner hour. We do sell quite a bit of food which was another pleasant surprise. It definitely soaks up some of the rum.

How many covers are you doing on a Friday or Saturday?
It's hard to compute that because we count the covers just for the tables. We have a capacity of 240, which is rather large. Once we get to 240, we go one-in-one-out. It's hard to keep track because there's such a big bar crowd, 75 or more people standing around. That was another thing I didn't expect too much—I figured that most people would sit at a table. One of the things we did was design drink rails that are about eight feet behind the bar stools; after the first week we assigned a cocktail server to those drink rails.

Does the line ever get out to the street (from the alley)?
It can get out to the street for sure. Usually the long line is a tell that it's going to take a long time to get in, but it really doesn't. We have quite a bit of turnover. The most that anyone has had to wait was about 45 minutes.

Are people waiting a long time and then walking away?
I'm sure people all have different thresholds for how long to wait to get in, but I haven't heard too many stories of it taking an hour to get into the actual building. We do have plenty of standing room in the bar area, and if you want a table, then we do take your name when you enter. We have a host who will take your name and then text you when your table is ready.

Are you getting a lot of celebrities in there?
The first week we were open we had Danny Masterson and Chris Masterson, Mila Kunis and Ashton Kutcher. Jenny McCarthy has been in once or twice. I'm thrilled that I've seen a lot of chefs in on Sundays and Mondays—the industry crowd has been fantastic so far. The guys from Publican, Ryan Poli of Tavernita, the Sheerin brothers.

Do people try to sneak in?
There's truly only one way in and out. We have a service exit that we use but no one really knows it's there.

It seems like some people aren't understanding the tiki theme—ordering vodka tonics.
It definitely happens and that's fine with us. Maybe in the vodka tonic we'll put a little orchid on top for them so they feel they're some place different. People would see the blue light in the alley and check it out, and order what they'd usually order. It might take that first round, where they order the vodka soda and we put and orchid in it, and they're like, "wow what's that?" and they look around and see everyone else with elaborate garnishes on their drinks in ceramic mugs, and they're like, "I probably shouldn't be having this vodka tonic."

Is there any type of customer that you like to see and you're hoping to attract?
I always value seeing the people who came in when I was at The Whistler. They're always so open-minded and willing to try new things. They never asked why I didn't have a vodka drink on the menu, even five years ago. I've seen more and more of those people come in, which is fantastic because I know they live in Logan Square. I was really concerned that I would lose them, and I'm pleasantly surprised that I haven't and that they're willing to come down to River North to check out the spot.

The second thing was the tiki geeks. There are people who knew a lot about tiki from the old Palmer House days and Trader Vic's and have been to a bunch of other tiki bars around the country. Those people were very important for me to have come in. I had people come in on Monday and buy six, seven, eight mugs at a time for their collections. I think that's something that's been lost along the way.

Is there one gatekeeper tool that you need?
I really think a great gatekeeper is a great host. Even before you get into the room, you have to have somebody who is a great host at the front door before you even come downstairs and are transported to another place to get you excited about it. People don't want to wait in line for 45 minutes, they want to be excited about what they're going to see.

When you're not at Three Dots, where do you like to go?
I'm usually at Lula Café, Longman & Eagle or Billy Sunday. Sometimes I'll go to Parson's or Scofflaw, but typically I'm at those spots. If I'm just getting breakfast, I'll go to Reno.

What's the best time to avoid the line?
Sunday and Monday, we haven't encountered a line for the entire evening. Tuesday, Wednesday, Thursday before 7 p.m. or a little bit later too, if you want to come in at 12:30 at night. Last call is at 1:15 a.m.
· All Three Dots and a Dash Coverage [-ECHI-]
· All Paul McGee Coverage [-ECHI-]
[Photo: Anjali Pinto]