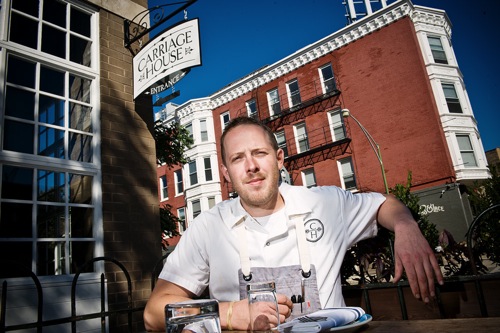 Although Mark Steuer opened The Bedford a block away 17 months prior, Carriage House is Steuer's baby. A native of Charleston, S.C., Steuer gave the neighborhood a chef-driven Southern dining option amidst the strip of bars and shops on Division Street. From the imaginative cocktails to the heightened Southern classics to some big-name staff, Steuer sat down to chat about how it happened, the first year, and what's on the horizon.

How has the first year gone?
Overall I'm super happy. It's funny, I was talking with my guys, it feels like six super-long weeks, it doesn't feel like a year, but in a good way.

The biggest thing that's surprised me is how many people from the South came crawling out of the woodwork when we opened. My biggest goal with Carriage House was to showcase that the food I grew up with in Charleston didn't necessarily have to be super heavy, or just chicken and barbecue.

Have the Southern people who have come in here accepted you?
95 percent have. We've had a couple people who said it wasn't authentic. From the get-go everything I've said about what we're doing is that I wanted to take the flavors and keep them authentic and use modern techniques to lighten it. I think we put across really the same flavors that I'm accustomed to but we're making it a little more friendly for people to come in a few times a week and eat.

How did the expansion from The Bedford come about?
I wasn't bored or anything but The Bedford wasn't really what I wanted to do. I've had this idea for about five years—I almost got it open once a couple years ago but the money went away. (The space) looks quite a bit different now but just looking at the shell, it kind of reminded me with the columns up front of a carriage house in Charleston. It was pretty easy as far of the development because I already had like eight menus written, I had a booklet of interior design stuff.

You've had a lot of big-name people work here.
I'll devote that partially to me and partially to Michael Velo, our GM. I got him to buy into my concept of what we wanted to do. Quality people want to work in an environment where it's structured and where everyone has the same vision. For us, I knew exactly what I wanted every aspect of the restaurant to be. That's why Michael Simon wanted to come on, and why Bryce is here. Sterling too. Sterling was up front with me, I knew he had other plans.

How do you feel the neighborhood as a whole has accepted you?
Part of the reason I wanted to do this in this space is because there's not a whole lot of just restaurants on this street. Bedford even is a bar at night; everything on Division in this area revolves around nightlife. I think we had a good opportunity being a food-focused restaurant to kind of, not dominate but?there are enough families moving in, it's kind of gentrified, that I feel like we can capture a really good neighborhood business, and we have.

One thing about the neighborhood is that there are a lot of Southern or barbecue places. There's Lillie's, Smoke Daddy, The Southern, Moonshine. Do you feel like you've set yourself apart?
I think we still compete naturally in some ways. Most of the places you've mentioned are pretty bar heavy, so we put ourselves at the higher end of that. The menu prices don't exclude us from people who just want to have a beer and a bite but I feel we're hitting a niche that not all of those places are. When it comes to just being a destination where people want to come have dinner at a Southern restaurant, I feel like we set ourselves apart in that way.

Have you ever thought about doing barbecue?
All the time. Not here, but in Chicago for sure. I've got a list of a three or four more things we want to do in the next couple years.

What are you looking to do in Carriage House in the future?
We might do some tasting menus in the future, and I'd like to start doing some Monday night dinners where we get some guest chefs in. But other than that, I really want to focus on doing the best that we can and keep it moving. I've been thinking about this restaurant for so long that it's really important to me that we continue to excel and push ourselves to get better.

So do you want this to be your signature place forever?
This place was important to me in a lot of ways. The concept behind it is how I want people to see me. I feel like people in the city who go out and spend their money expect a certain level. We wanted to tidy it up without detracting. I'm really happy that we've been received well, because it makes me feel like we can go do more now.

What else are you working on?
I am working on bottling our sauces. We're going to start with the sweet potato hot sauce and the smoked jalapeño hot sauce. We'll see how that goes and then we'll try some more fun off-the-cuff sauces. I'm trying to get it done by the holidays, but it's up to the bottler at this point. It's been a much longer process than I'd anticipated, but that's alright, I'd rather get it right.
· All Carriage House Coverage [-ECHI-]
· All Mark Steuer Coverage [-ECHI-]
· All One Year Ins [-ECHI-]