Share All sharing options for: Guaranteed Fabulous Meals: A Chat With Jessica Kato

Eater contributor David Hammond is a co-founder and lead moderator of LTHForum.com and writes the weekly "What to Do With" column for the Chicago Sun-Times and regularly for Splash! His cable television series "You Really Should Eat This" focuses on must-try dishes in Oak Park, Illinois; two segments from this series will screen at the upcoming Chicago Food Film Festival. 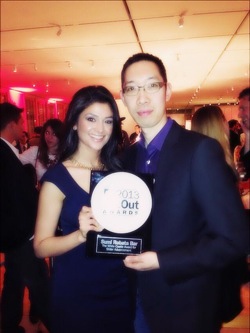 Sumi Robata Bar, the open-grill sushi-free Japanese restaurant in River North, has been open about a year. When you walk in, the first face you'll likely see will be that of Jessica Kato, wife of the man behind the grill, chef Gene Kato.

Tell us about your role at Sumi Robata Bar?
My first role was being chef's number one cheerleader, even before the creation of Sumi. Since we began working on the concept I've worn many hats, and I imagine that will continue as Sumi grows. I have negotiated contracts for the restaurant, worked with both our contractors and architects whenever issues arose, and monitored the daily construction of the restaurant.

The chef is the chief, the head person in a kitchen, and the chef is used to having his way. Do you find that being married to the main man makes it difficult to maintain equal footing on the domestic front?
Now, that's funny! The only thing I'm going to say is that I'm a Colombian woman and will leave the rest for you to guess...

Is there any area of the kitchen or the food preparation area where your comments are not welcome?
I never get involved in the kitchen or the food preparation as I completely trust chef in that arena; he is the one with over 18 years' experience. Besides, I think I have my fair share of responsibilities within the restaurant that keep me busy and on my toes.

Is there any restaurant area under your responsibility where the chef's comments are not welcome, where you have complete and unquestioned control?
With the exception of the menu and the kitchen, the entire project has always been discussed together, and the decisions have been made together. That's the way we have continued to keep it. As owners, it is critical to keep each other up to speed on everything, and I like it that way.

What's the hardest part of working with your spouse?
Working with him is not that hard, as I already know his expectations and how he works. But don't get me wrong: it took us the two-and-a-half years of planning Sumi to finally be in sync with one another. If you had asked me that question when we first started the project, you probably be getting a different answer.

Is there anything the chef does that makes you absolutely crazy?
Currently, I cannot say chef does really anything to make me go crazy—he is very calm and collected and always very organized with everything he does. But maybe you should ask him what I do that makes him crazy. Ha!

What's the most fulfilling aspect of being married to the chef?
A guaranteed fabulous meal! And the fact I haven't had to cook in four years. It's not a bad deal; I think it works well as I don't consider myself to be very "domestic" in the traditional sense.
· All Sumi Robata Bar Coverage [-ECHI-]
For all food, all the time, follow David on Facebook (DCHammond) and Twitter @DavidHammond