Share All sharing options for: Impertinent Questions with Joe De Vito and Josh Carl of Jellyfish

Eater contributor David Hammond is a co-founder and lead moderator of LTHForum.com. For the Chicago Sun-Times, he had written the weekly "Food Detective" column and now writes the weekly "What to Do With" column and regularly for Splash! His cable television series "You Really Should Eat This" focuses on must-try dishes in Oak Park, Illinois; two segments from this series will screen at the upcoming Chicago Food Film Festival. 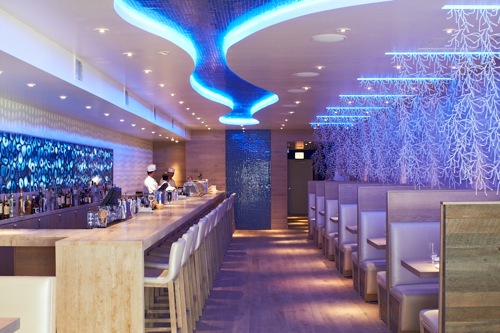 Jellyfish is celebrating its first year in business, and the initial description published in Eater still holds true: "Walking into Jellyfish, you'll quickly understand why the name makes sense...you almost feel like you've stepped inside an aquarium."

Second-story Jellyfish is accessible by elevator or stairs (where sex is not permitted; see below), and dining there, you do get a sense of being separated from the rush of the street below while at the same time the huge windows in the atrium (wide open during warmer months) never let you forget you're still downtown. Partners Joseph De Vito (Moto, La Vita) and Josh Carl (Barneys New York, Lululemon) chatted about sushi, flip-flops, their asses, and related topics.

Sushi is extraordinarily popular, and Jellyfish feeds that trend. Still, do you think, really, that Chicago needed another sushi restaurant?
DE VITO: In Chicago, I think if you're doing it right, whether it's sushi or steak or pasta, people are going to embrace it. We do have sushi, but we have hot food as well. There's a lot going on at Jellyfish, more than at your usual sushi restaurant.
CARL: Part of our fault is with the naming. We named the place Jellyfish, and it has this aquatic design, and we got a lot of publicity for our sushi. Financially, at the beginning, we were about 80% sushi sales and about 20% hot sales, and I was frustrated because we're so much more than a sushi restaurant. Now we're about 50% sushi and 50% hot food. So we're not just a sushi restaurant, even though we named it Jellyfish.

I couldn't help but notice that jellyfish is no longer on the menu??
DE VITO: We did have it on the menu, but it's kind of a tough to make palatable because there's really no flavor or taste to it. And it has this funny texture. We put jellyfish in a salad and we mixed it up with a lot of ingredients, and some people ordered it, and it was edible, but we had to pull it off the menu.

We enjoy sashimi and nigiri, but I kind of consider rolls to be sushi for people who don't particularly like fish because the fish flavor is hidden beneath ingredients like cream cheese and hot sauce. My preference is to go commando and just have the fish raw, like sashimi, without adornment. What's your preference regarding raw fish?
DIVITO: I eat sushi every day, and when you do that, you have to mix it up. We try to have something for everybody.
CARL: I like it both ways, and although I like raw fish I also like to get the different flavors. And we're trying to do the fish in ways that others haven't. We've got the basics covered, but we want to serve things you haven't seen anywhere else.

Regarding sushi, you must be aware of the sustainability issues related to the rise in sushi's popularity. Some are predicting the end of blue fin tuna by 2030. So, given that the love of sushi has led to the overfishing of oceans, and Jellyfish serves sushi, to what extent do you feel responsible for denying my grandchild the joy of eating blue fin tuna?
CARL: Could you rephrase the question?

Never mind. Let's just move on. Jellyfish is a stylishly-designed restaurant. I couldn't help but notice, though, that there were patrons in T-shirts and flip-flops. On the one hand, if there's no dress code, people should be able wear whatever they want, whatever they're comfortable in. On the other hand, don't you sometimes want to just smack guests who show up at your restaurant looking like they just crawled off the beach?
DE VITO: I'm almost the opposite of that. Now I'm always in a jacket and tie, but I've been in the business 20 years. And some of those guys in t-shirts are the ones who pull out a black card, so you can never really judge people based on what they're wearing to dinner. And Rush Street is such a melting pot, with a lot of people from all over the world, and that helps make a great restaurant: a lot of different people coming through the door. I want all of them to have a great time.
CARL: We do have such a range of people on Rush Street. There are 20-year-olds and 80-year-olds – and 80-year-olds hitting on 20-year-olds – and some people are more old-school. Now, I haven't seen the flip-flops, and I'm not in favor of flip-flops and want to go on record as disapproving of them, but we understand that we have to accept all types?and we do. Those different ages and cultures make the place more interesting.

My wife and I used to live around Dearborn and Division, so we know that it can sometimes get kind of crazy around here in the early morning hours. How do you handle that?
DIVITO: We're celebrating our one year anniversary and I have to say we've not had one problem. Now, we have had people who come in a little over-served, and we just tell them we're not going to serve them anymore.
CARL: The great thing about Rush street is that, given the craziness of the street, we have a great police presence. Anytime there's an incident, and we've had over-served customers and things like sexual encounters in our staircase, the police are right there.

You don't allow sexual encounters in the staircase? I'm making a mental note of that. Moving on. According to an NPR report last week, as well as an article in the most recent New Yorker, lobster prices are down about two-thirds from 2005 prices. When we dined at Jellyfish we had excellent lobster bisque – my wife said it was the best she'd ever had – but I was wondering: do you reduce your prices on items like lobster when there's a precipitous fall in the market price, and "pass the savings along to the customer," or do you have to keep prices high because of the perceived value of this luxury seafood item?
CARL: That's a very good question.

Thank you.
CARL: We're not playing any games as far as trying to do an arbitrage with menu prices, although I do come from a hedge fund background. You have to ask what's a fair market price for the dish, and it has nothing to do with the cost. Maybe that's kind of dumb, and I'm sure other restaurants look more closely at that, but in my mind those considerations don't play into it. You have to take into account what street you're on, what our general pricing is, and you can't change that even if the prices get too high. If we're going to take a little bit of a loss, so be it, because if customers ever start thinking you're trying to play games, you lose the integrity of everything you stand for.

Of the two of you, who would you say has the better ass?
CARL: I definitely have a better ass than Joe.
DE VITO: I'm Italian, so I think I have Carl beat there.

Joe, I have to ask, what was it like growing up with Danny DeVito?
DE VITO: I'm not related to Danny DeVito.
· All Jellyfish Coverage [-ECHI-]
· All Impertinent Questions [-ECHI-]
For all food, all the time, follow David on Facebook (DCHammond) and Twitter @DavidHammond.