Bill Kim Chats About the First Year of BellyQ

Share All sharing options for: Bill Kim Chats About the First Year of BellyQ 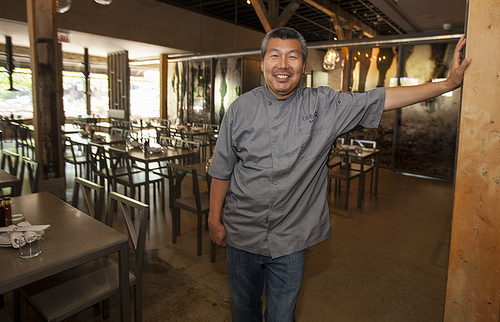 BellyQ was a red-hot project long before it opened in the old One Sixtyblue space on the far west end of Randolph Row. Much larger in scope than Kim's first two street food-inspired eateries, Belly Shack and Urbanbelly, he partnered with Cornerstone Restaurant Group and Michael Jordan to bring his cuisine to a larger audience by offering a more approachable menu, accessible location, larger space, and perks like a karaoke space and tabletop grills.

Just back from vacation, Kim talked about how the origins of the project, how the first year went, and what's on the horizon for him.

How did you feel going into BellyQ and how do you feel it's worked out as far as the largesse of it compared to Urbanbelly and Belly Shack?
Everybody thinks of me as the guy who opened up the 32-seat BYO restaurant and has a minimal kitchen, but if you look at my past what we do at BellyQ it's what I'd done all my career. When I worked at Trotters we'd have 20 people in the kitchen doing tasting menus for 200 people. I think I was bred to do multiple restaurants. BellyQ kinda fell into our lap and I'm like, "let's do this."

How do you feel about the cuisine at BellyQ? It's a little more approachable and less street food.
We like to say traditional amplified, we took what we've known of Asian barbeque and we put our twist on it. The thing I always like to say is approachable, affordable, and flavorful. Put the modern take on it but we also don't take ourselves so seriously so we have the karaoke room. It was important to us make a statement and say that we're going to be doing it a little bit different than everybody else.

How do you feel it's been accepted?
I feel it's been accepted very well, the restaurant is dynamic. We have new people coming but what has happened since we opened Urbanbelly, we had kids who came to our restaurant in the beginning. So they're bringing their parents and their grandparents to BellyQ, it's multiple generations. I was at the Finger Lakes and we had a woman that was in her 70s and she was like, "oh my god, you're the guy who owns Urbanbelly, my granddaughter brought me there." It just blew me away that she liked it and she actually wanted to come back and have the rice cakes.

You distill Korean barbeque down enough that people can enjoy it and not be overwhelmed. What are the most interesting press clippings that have come along about Belly Q?
Unique Eats on the Food Channel. A huge surprise was the Food & Wine article that happened this July where we go to Ohai California and they did a seven-page spread out of us. To be on a platform nationally and have people really understand and love the restaurant in that way just blows my mind.

Is there anything you would have liked to have done different or any lessons you've learned over the first year?
We are still learning the lessons. It takes an army to run it. There's gonna be other things coming down the road that are gonna really help us keeping it tighter.

There's a lot of different facets to BellyQ, there's a lot of moving parts—the cuisine, the karaoke, the tabletop grills. How much fun have you had or is it tough to get a handle on it all?
I'm really at a point with me I like to reflect—I did the serious stuff already. I'm not saying what we do currently is not serious, but I'm enjoying the process a lot more. In my past life I felt like I was doing it and surviving and I don't want to feel like I want to survive anymore. I want to entertain, I want people to have fun. We were just trying to climb the mountain. We still need to climb, but we can take that little rest and look at it in a different light. How can we twist the model a little bit?

You guys are just on the end of Randolph Row, how is the location working out?
I love it. We have two sections that are outdoors so I like to call it the loading dock and we converted that part into our little sanctuary. You feel like you're on your own island. You get to pretty much do what you need to do, but being on that side of Randolph, the Hawks won the Stanley Cup, when we have a Bulls game or a concert we just get rocked. They come at 4:30, leave by 6:30—that's what we want in the restaurant business. I would never trade it for anything in the world to be on that corner.

What do you have in the works for there and coming up year two and beyond?
Right now we don't have something solid, but we will be doing something but I can't really say right now. The one thing we're really progressing is our line of Urbanbelly foods, we just got a huge order overseas. A department store called Marks & Spencer in the UK. I'm totally blown away by that. We also got picked up by Mariano's, we're in Whole Foods, and eight other smaller grocery stores. I really want to do frozen dumplings, steamed buns, cooking kits. And we're coming out with our Asian barbeque sauce in a couple months, it's homemade hoisin that we use at BellyQ.

Did you do anything special for the anniversary?
We were at the Finger Lakes, so that is a gift to ourselves. No computers, just me fishing, the wife antiquing, and spending some great time with people that we love there. That really relaxes us and rejuvenates us until January. Before I left we got staff at Urbanbelly and Belly Shack and guys at BellyQ some Glazed & Infused and celebrated with them.
· All Bill Kim Coverage [-ECHI-]
· All BellyQ Coverage [-ECHI-]
· BellyQ [Official Site]
· All One Year Ins [-ECHI-]