Share All sharing options for: Double Vision: An Interview With Lisa Kornick

Eater contributor David Hammond is a co-founder and lead moderator of LTHForum.com, the 11,000 member Chicago-based culinary chat site. For the Chicago Sun-Times, he had written the weekly "Food Detective" column and now writes the weekly "What to Do With" column and regularly for Splash!, and is a columnist for the Wednesday Journal. His cable television series "You Really Should Eat This" focuses on must-try dishes in Oak Park, Illinois. 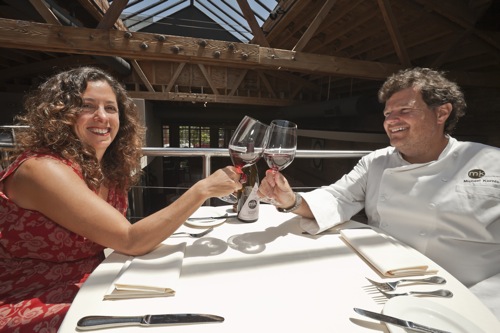 Being chef at a restaurant is a life-consuming task, requiring long hours, tension-filled evenings, and a regular diet of stress and high-pressure. Being a chef is challenging; being married to a chef is no picnic.

Lisa Kornick is the wife of Michael Kornick, the man whose initials lend the name to the restaurant mk. Michael is also the driving force behind DMK Burger Bar, Fish Bar and, along with chef Eric Williams, County Barbeque.

Lisa oversees day–to-day operations at mk, focusing on the culture of the restaurant, which means, she says, "helping our managers, chefs, and waitstaff focus on a guest-centered experience and maintain our vision of excellence."

On the topic of vision, how is your personal vision reflected in the remodel of mk?
I wanted the remodel to make the restaurant feel more welcoming overall. For example, the new entranceway now has huge glass doors so guests can see the lounge as they come in. I also wanted to create new spaces so guests could enjoy mk in different ways. The new lounge menu is a great way to have a small bite and a cocktail without committing to a whole meal.

What's the toughest part of being a member of a restaurant marriage?
The loud fights in the kitchen in the middle of service! They are the worst; so embarrassing, and you know everyone is thinking, "Boy, I'm glad I'm not married to her!"

I'm guessing you've seen more than one restaurant marriage fall apart. Is there any consistent reason why this happens?
Each marriage is a unique partnership, but I think when the partnership feels really equal, it will work the best. Being out of sync and having a power imbalance is probably a reason that marriages don't last.

How do you make the partnership with Michael work?
We have enough faith and trust in each other that we don't shy away from confronting difficult issues. We also take time away from the restaurant, time as a couple when we have a rule not to talk business. We work on our relationship and have gotten great advice over the years from our couples' therapist.

When one thinks of restaurant marriages, more likely than not, it's the husband in the spotlight, because it's usually the guy who's the chef (that's the reality of the restaurant biz). The wife is working behind the scenes. Does that ever get on your nerves? Does it ever bother you that people don't seem to recognize the critical role that spouses play in restaurant marriages?
Historically, restaurants were family-owned businesses, and most traditional French places had the husband as the chef and the wife in front and in the back doing the books (Michael could talk about this for three hours!). Personally, I entered the business to help Michael realize his dream of owning and operating his own restaurant. I thought I would do it for a year. 15 years later, I am running the operation, so he's able to do other projects. I never got in the business for recognition.

If you were going to give some advice to a young married couple that was planning to open a restaurant together, what would it be?
Have an equal relationship with veto power for each person. It's important to be equal partners so there isn't resentment or a spouse who feels like they're working for the other. A shared vision is crucial.
· All mk Coverage [-ECHI-]
· mk [Official Site]
· All Michael Kornick Coverage [-ECHI-]