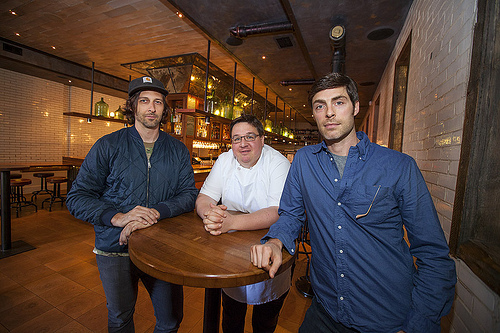 [Editor's Note: This interview took place before news of Mike Sheerin's departure broke. He does not participate.] Since the first inkling of the project broke in CS, palpable buzz has, and continues to, surround Trenchermen. A hard-to-describe multi-pronged concept has emerged, lauded for its "familiar flavors in unfamiliar ways," a refined-yet-approachable bar program, cutting-edge coffee program, fascinating interior inside a historic bathhouse, Monday night record parties, and its burger, the concept continues to evolve.

Matt Eisler, Kevin Heisner, and Pat Sheerin discussed how it came about and what's to come as they sat around the Trenchermen bar.

What did you expect going into Trenchermen and how is it going in relation to those expectations?
Pat: I think it's been an evolution of the restaurant. We definitely had a lot of hype coming in and we worked hard on providing the opening buzz out of the gates. We worked on slowly building all the different parts of the restaurant and programming that we do here. We still want to create a really interesting restaurant but we also have really been working on becoming part of the neighborhood conversation in Bucktown/Wicker Park.

Matt: First off, on the whole it's going great. In terms of our concept and how we've evolved, we came in with some pretty ambitious ideas. We wanted to kind of have this elevated food as well as neighborhood place, neighborhood institution. Once we let it be known what we're capable of and everyone came in and gave us a shot, we then got more into that evolution.

Kevin: It was an exciting project (to design) because they left me alone completely on it and I think at one point Matt's like, "Just go crazy. Do whatever you need to do." Having two rooms to work with, we set this challenge of the two styles we were going with and then meshed them without being confusing.

Talk about the original idea.
Pat: We had a plan to have a number of things. Some things like the coffee program were built into the original plan but it's always been about slow growth. Once we had mastered a skill set we could add another one. Through the course of the winter we really started tweaking things.

Matt: We came in with some general ideas. We wanted to do world-class food, we wanted to have this neighborhood institution with this vivial bar scene. And we also knew that we didn't want to half-ass anything.

If you had to describe what Trenchermen is in three to five words, could you do that?
Matt: I think all three of us could take a stab at it and come up with 15 different words collectively and they would all work. I don't think it's a complicated concept but I do think it's something you have to experience. Being a new father, people try to explain to you what it's like to have a kid. The baby comes out, you're a dad and you're like, "Oh I get it now." Walking into this room, within a minute or two you're like, "Oh shit, I get it now."

Pat: Alive is a good word. You walk into here, especially at night, you look and you see the bar. There's a hum about it.

The music program illustrates that point.
Matt: Exactly. We did an outlaw night a couple weeks ago (with Arami) and Scottie (the DJ) dug up some Japanese surf rock, and we had hand rolls and sake cocktails and we were really having fun with it. And also what's cool about it is it's not DJs, it's neighborhood people, it's industry people who happen to have a vinyl collection and happen to be into that. There's no DJ booth, it's just playing records. My almost six-week-old son has never missed a Monday.

What has the clientele been like?
Matt: We opened this place a stone's throw from the epicenter of a lively and eclectic neighborhood and I think our clientele reflects that. We have people who seek us out sometimes from other parts of the world, literally, and will make reservations months ahead of time. Shift drinks for the guys at Big Star. Even just flip-flops and shorts come in for a Schlitz tallboy. And then at brunch we have strollers in here. We really do. It really runs the gambit.

Kevin: I wanted to see if we could capture a wide audience. Usually you niche yourselves, and I don't think we've done that.

Did you want to give people that spectrum of experiences they could have here? That's often hard to pull off.
Pat: It is, but we continue to evolve and tweak what we do so people can find an experience that will make them happy. We strive to do things that are a little bit different in terms of presenting familiar flavors in unfamiliar ways.

Matt: All those demographics and types of people, of crowds, all live here. So it's not like we're a destination place, trying to draw focused marketing or specific initiatives on all these different demographics.

How has the food come along?
Pat: When we opened, it was more about things we'd practiced and knew would work, and were delicious. Now, a year into it we're going to make some tweaks to the kitchen. It's about learning how the space works, kind of an organic process. It's focused more on the concept of the dish and then making sure we're sticking true to familiar flavors presented in an unfamiliar way. I think we've also focused on providing Trenchermen, hearty eaters and drinkers, and taking that thought process and applying it to more creative vegetable dishes as well.

What's the next step for the food?
Pat: It's to continue to push from both sides to keep what people expect in terms of the higher level of creativity on the dining room side and just doing creative and interesting things for the bar.

Can you talk a little bit about the beginnings and evolution of the space?
Kevin: I don't build like most people. I'll start to build more like a sculpture and I'll add on. It's like, "This is what this needs now." And there's no way you can necessarily see those subtleties if you do it all up front. It's impossible. If you look at great architects, great designers, they don't work like that either. They don't just hammer out.

It's in the (Luxor Turkish Baths), right?
Kevin: Yeah, it actually operated until about 1990. It was built in the 1930's. This was all that remained for us to salvage, literally that wall and that wall. The kitchen is new tile, and all the ceilings, I just mimicked the way they would look.

Matt: (Shows photo on phone) This is a photo from the early 1970's. This guy is leaning up against what's going to be the Chop Shop but that is this building. He didn't have plumbing in his house, he didn't have a shower and he would come bathe here every day. That's what it was.

Pat: That's some of the appeal, it is a neighborhood place. It was originally. Since you'd take a steam in nothing but a towel, it was the perfect place for mobsters to meet with politicians and whoever else and cut deals because there's no wires, there's no anything. So it was a notorious place for people coming together for all kinds of shady business. It's kind of a cool background.

You mentioned you want to be here for 20 years. What is going to happen in the future and how can you evolve to continue to be that fixture in the neighborhood?
Matt: For me it's about continuing with this evolution. These tweaks we've made throughout the first year have been successful and kept us on track, moving towards our goal. The neighborhood's going to continue to grow and evolve and we just have to kind of stay on top of it and not get stagnant, not get stale.

A year from now, this little strip is going to be a different place. When we opened people said it's the wrong side of the tracks. But in a year from now, it won't be.

Pat: I think it is creating a culture here that is about, "How do we make it better every day?" and never losing that. We have a great core, a great group here that wants to practice their craft and that's what we want to provide.

Kevin: We're doing these really sophisticated things without pretentiousness. And that's what's really important. It's not to be like, "Oh we do this that's so important." It's "No, we want to share these things with you." And then the other thing about this long-term, we don't want to become a dinosaur just being here to be here. I like what I do and these guys like what they do, and I think that's what makes this place stay forever.