A Day in the Life at White Palace Grill

Share All sharing options for: A Day in the Life at White Palace Grill

Ever wonder what it's like to maintain an iconic greasy spoon in Chicago? As part of Greasy Spoons Week, Eater stepped inside White Palace Grill to get an idea of what a typical day was like for jack-of-all-trades Hector Rivera. 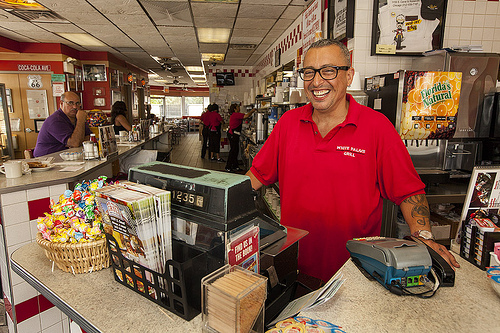 Although his official title is shift manager, White Palace Grill higher-ups describe Hector Rivera as the "hustler, everyman, counter guy, host, liason, and everyman." Needless to say he does it all, including take care of Bono, Michael Jordan, P. Diddy, and maybe your grandma. Having worked at White Palace Grill since it opened, Rivera, 46 and "5'9" in heels," spoke about what he does on a day-to-day basis.

What's the first thing you do when you come in?
I like to make sure that the restaurant is clean—visibly clean—the floors and the bathroom. Then I put on my uniform and wash my hands. It's usually pretty busy when I come in around lunchtime. After the morning I take over the register and I help out with carryouts. I help the waitresses if they get behind. We have a line of people and I have to keep them entertained while they wait. Basically it's just keeping the people happy and making sure they want to come back and have a good experience.

What is the busiest day that you usually work?
Sundays are jam-packed. I know it's busy on Saturdays, but my day off is Saturday. We have carryouts and we have a line of people waiting out the door, but usually it's just the beginning of the rush. It's controlled chaos.

How do you control the chaos?
I survey the area and see what's going on—make sure it's clean. I make sure the food looks good when it goes out. If there's something wrong with the customer or if they don't like the food, I'll go talk to them and straighten everything out. Maybe at night they have some physical altercations. But during my shift in the morning and afternoon, there's not too much that happens. On Sunday you have a lot of churchgoers and families that act more respectful.

What do you do for these celebrities who come in?
When Bono came in, one of the waitresses was a big fan. She paid for his ticket, but then he turned around and left her a $50 tip. I was kind of nervous, but I got his autograph. We tried not to bother him too much. I say hi, I'm a fan, and I'll shake their hand. I try not to bother them too much cause they're celebrities and they get that all the time wherever they go.

What do you do for people that complain about their food?
If they don't like it, we'll usually give them something else. Or if they don't want anything, we'll just take it off the bill. The thing that is the most important to me is that they leave happily, cause then I know they're going come back. You can't teach someone to deal with people, that's something you learn growing up. If you don't like to be around people and have fun then it can make the job stressful.

What do you do at the end of your day?
We count the register together. I make sure I close out the credit cards. I make sure everything is clean before I leave. Let them know we don't have it so if someone orders something we don't have then it's not a big deal. So making sure that everyone is on the same page. I take pride in my work.
· White Palace Grill [Official Site]
· All Greasy Spoons Week Coverage [-ECHI-]