This Is Not Your Grandpa's Diner

Share All sharing options for: This Is Not Your Grandpa's Diner

Eater contributor Catherine De Orio is a blogger, writer, entrepreneur, Check, Please host, and TV and radio personality. She scours the city for what's trending on the dining scene. Follow her culinary adventures on Twitter @CatCalls. 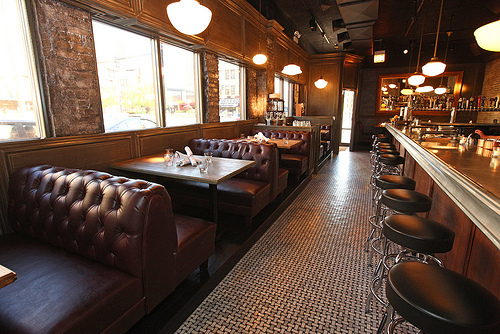 The mid-2000s ushered in an age of comfort foods when mac & cheese, meatloaf and pot roast, gussied up to be gourmet, made appearances on every high-end menu in town. Innovative chefs and restaurateurs recently took this one step further and built spaces appropriate for such fare. Enter the upscale diner. Restaurateur Brendan Sodikoff was one of, if not the first, to open a gourmet diner concept with the beloved Au Cheval and there was nothing short order about creating his destination diner.

"It wasn't about being upscale—that wasn't our go-to, we wanted something fun," he explains. "I happened to eat at M. Wells (in Queens, NY) the last night it was open—it was fun, they loved to cook and that's where it all began. When I saw how far they were pushing it, I saw what we could do here."

And push it he did with slamming loud music, cocktails, craft beers and a menu of dishes reaching absurdist levels in size and calorie count. Gone was Edward Hopper's diner as a symbol of urban isolation and in was the optimism of the 1950s diner with a hipster makeover.

Sodikoff describes a diner as a casual environment where 'you can experience the space while watching them cook.' "I really wanted the identity of the diner: open kitchen, the interactions with the clanging of the pots and pans, the spatula on the griddles, reference of the diner and a full bar," he says.

Although loosely following the outline of a diner, he wanted to shatter people's preconceived notion of the 'brightly lit 50s –style diner.' "I wanted people to be open to what the experience was," he says, "I didn't want them to sit down and have a very specific idea of what they were going to get."

And what did they get? Well, over 30 craft beers and a carefully curated craft cocktail list for one. But it's the familiar old school diner dishes, given whimsical twists and quality upgrades that draw the crowds (often up to two-hour waits). Thanks to write-ups in every food blog, major food periodical and its anointment by Bon Appetit as the 'best burger in the country,' his hamburger has become the stuff of legend. Interestingly, that was not the menu item that oozed the spirit of what he was doing.

"Gosh what was it that really said Au Cheval to me?" he muses. Not surprising, the ubiquitous egg was the first thing on which Sodikoff focused, frying through roughly two cases of eggs until they achieved their goal: no color, tender whites and well seasoned. Even its moniker which translates to "on horseback," is slang for adding an egg. Here, whether it's a burger, hash or bologna sandwich, putting an egg on it is like "putting a bird on it" in Portlandia.

Everything here is super-sized. "The portions are ridiculous," he chuckles as he falls into a riff about the burger that deals a double for a single and a triple for a double. "But I ordered a single and it's a double, why is it a double?" He laughs and explains, "We wanted humor."

These fun touches capture the casual spirit of the diner rather than the exact idea of a diner. Although he denies a grand plan behind the theme, it's more that he didn't envision what a patron would want as much as what he found lacking in the city.

"Honestly I thought how amazing would it be to get a perfectly executed foie gras terrine and a cheeseburger in the same meal, be in and out in like 20 minutes, and be listening to slamming hip-hop in this crazy little space," he says. "That sounds like something that is memorable to me. I'd go there."

So, he set out and created an original concept built upon a foundation of borrowed ideas. And he's very forthright about the fact that he incorporates elements he has seen before into his projects. "As restaurants, we need to borrow like artists—someone does something different and takes it in a new way. I don't pretend to have original ideas, everything is borrowed, should be borrowed, should be shared and then you try to keep getting better and better," he says.

And maybe that's the magic sauce with Sodikoff's diner—we are vaguely familiar with its individual elements, bringing a level of comfort to the environment he has created, yet we have never seen anything like it before. He states it simply as "Pick something really common and do it really well." It's safe to say he has done this. So, what next?

When asked about keeping it open 24 hours per his initial plans, "I'd still like to figure that out." Since the opening of Au Cheval, myriad upscale diners have opened their doors including neighboring Little Goat Diner, Eleven City Diner in Lincoln Park and Hash House A Go Go. As for whether he has any plans for an additional diner—he smiles and replies, "who knows, maybe I'll do another one, something a little more traditional."