The Legend of the 'Slinger' and 'Dick Burger' at Diner Grill

Share All sharing options for: The Legend of the 'Slinger' and 'Dick Burger' at Diner Grill

Most people know Diner Grill, the tiny counter inside an old train car on Irving Park Road, for their legendarily greasy dish "The Slinger"—and with good reason. The meat-strosity is the subject of local legend—two hamburger patties, two sunnyside up eggs, cheese, hash browns, onions, covered with chili and served with a side of toast—that will net you a nifty certificate if you can manage to finish it.

The current certificate bears the lovely mug of Kenny, a cook/manager who's been working behind the David Lynch-esque counter for 12 years. Many locals have braved "The Slinger," whether for the competitive glory or sheer personal enjoyment. Two men have eaten four, but the fastest time is held by the second-ranked competitive eater in the world, Chicago's own Pat "Deep Dish" Bertoletti, who ate four in four minutes flat. 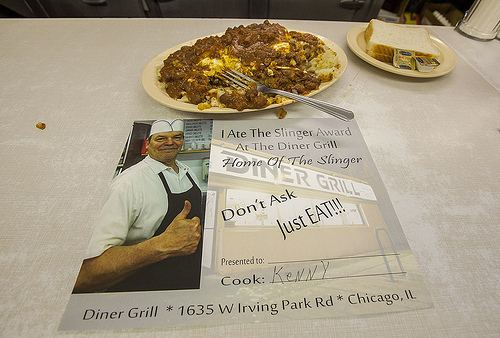 Yet there's another legendary dish at Diner Grill that many fewer know about (partly because it's off-the-menu), the "Dick Burger." And this dish holds a link to the No. 15 restaurant in the world, according to San Pellegrino—Alinea.

The burger (burger patty, grilled onions, two bacon strips, fried egg, hash browns) is named for Richard Richardson (or "Double Dick"), currently the general manager and beverage director at Yusho. The story goes that Richardson, when he was the Alinea sommelier, would end up at Diner Grill with Alinea chef Justin Leone on late nights. 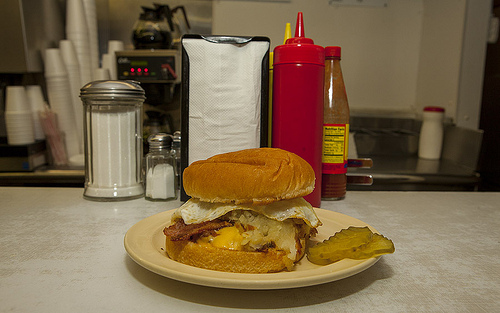 One night five years ago, after eating a burger with a runny (and messy) fried egg, he decided to have the cook put hash browns on his burger to soak up the yolk. Before long, crowds of 20-odd Alinea staff would flock to Diner Grill to order the burger. It wasn't long before word of the "Dick Burger" spread to all corners of the local restaurant and bar community.

"It's delicious," Drumbar's Craig Schoettler says. "It's even better at 4 a.m."

When Josh Pearson, former head bartender at Sepia and currently at the secret Swirl Wine Bar project, is asked about the "Dick Burger," he says it's "perfect at 4:30 a.m." When asked about it being named for Richard Richardson, he says, "that's what I've been told. It could just be urban legend though."

But by all accounts, the story is true. Richardson has certainly eaten enough of them—he says he averaged three "Dick Burgers" per visit and holds the record (since tied) of five in one visit. He even instituted a rule that "Dick Burgers" can only be ordered in twos, in order to "feel the effects."

One night, Richardson made a stop at Diner Grill to satisfy a craving. When he noticed a couple people at the counter indulging in "Dick Burgers," he let them in on the secret of its creation.

"They were certainly happy to meet the person that created it," he says.

Stop into Yusho and maybe you can meet the "Dick Burger" creator too.
· All Greasy Spoons Week Coverage [-ECHI-]