Share All sharing options for: Impertinent Questions with Brad Rubin of Eleven City Diner and Eleven Lincoln Park (with a cameo by Jeff Garlin)

Eater contributor David Hammond is a co-founder and lead moderator of LTHForum.com, has written the weekly Food Detective column and now for Splash! in the Chicago Sun-Times and is the food columnist for the Wednesday Journal. His cable television series "You Really Should Eat This" focuses on must-try dishes in Oak Park, Illinois. 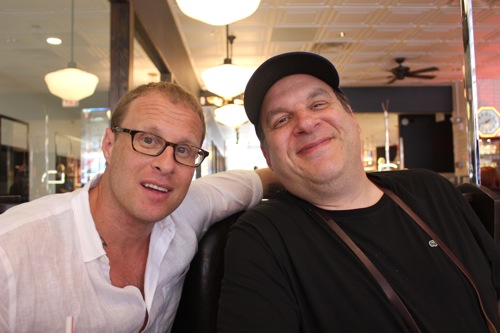 Six years ago, Brad Rubin opened Eleven City Diner in the South Loop. We met up with him at his new place, Eleven Lincoln Park, located on the site of the old Belden Deli. We talked about his business as well as the deli scene in other cities, what he's serving up right now and how he feels about criticism from Yelp and others. Rubin speaks with intense entrepreneurial energy, extremely articulate and alarmingly fit for someone who spends so much time around mounds of steaming pastrami, fried kreplach and latke. He also responds well to impertinent questions.

RUBIN: It's a hybrid of what I fell in love growing up. I'm not reinventing the wheel. I aspire to have an old school diner AND delicatessen. I grew up going to both diners and delicatessens. Naturally I want to stay alive in the market, and to do that I want to make sure I'm running not just a diner, not just a delicatessen. My restaurants have to encompass a lot of things, but I don't want to be everything to everybody, you know, I don't want to do pizza.

But you do serve a Mexican scramble?
And there's a reason for that. A little spice never hurt anybody, and part of the Americana thing that's going on here is that my chef is Mexican, my kitchen is mostly Mexican?

What Chicago kitchen is not mostly Mexican?
RUBIN: True, but I want to tip my hat to that heritage. Many of our guests are Hispanic, and I want to make our menu accessible to them. So it's not just traditional diner or delicatessen. I want to make some new things, but I have to be careful: for instance, I tried to sell tongue once, and I made ten pounds and most of it went to waste.

Maybe you should have sold tongue tacos? Hispanic customers might respond to that.
RUBIN: That's true, and we've thought of serving pastrami tacos, which we might still do.

Why do you think we don't have more delis in Chicago? We have a large Jewish population; we're big meat-eaters; we once had several huge corned beef processors here in town. So why hasn't Chicago had the great deli scene you find in New York or Los Angeles? Why has Chicago's delis scene always been so suck-o?
RUBIN: Even the delis in New York and Los Angeles are closing. The Stage has closed, Art's has closed, and this has been happening over the past 20 years. In Chicago, the immigrants who came over worked their asses off to start these businesses, they worked seven days a week, and they really believed in giving their children, the next generation, a better life. A lot of the Jewish and Greek families that ran delicatessens and diners did very well, and they wanted their kids to do better. The kids, as it turned out, wanted to do something different. They wanted to do something sexy, and to them, the delicatessen wasn't sexy business. To me, it's romantic, it's sexy.

Also, Chicago never had the more traditional Jewish culture, which they had in New York, which also contributed to the deli tradition in that city but maybe not so much here.

There's a joke there somewhere.
Hey, this is a family restaurant!

The dark root beer is aged in a Merlot cask for 12 months. It's cured, or brewed, with a cane sugar, a corn syrup, and a little brown sugar so it's more meat-y, it's more well-rounded, a little beefy.

Now, in terms of the other menu items, (Chicagoist's) Anthony Todd referred to your food as "decadent." How do you respond to that?
RUBIN: Thanks for the compliment! I love it, but it concerns me because another reason delicatessens today face big challenges is that tastes are evolving. People are now taking more of a proactive role toward their diets, and delicatessen food doesn't say "healthy." So we've evolved our menu of old school delicatessen and diner specials to include, for instance, a salad bar. This coming Tuesday we're starting to serve a gluten-free bread. We make a gluten-free falafel in a gluten-free fryer; nothing but gluten-free products go in there. We've got quinoa, and farro and less "decadent" options. We find that people eat healthier at lunch and more decadent at dinner.

So I checked Yelp before I came over today, and there are some scathing reviews on there for Eleven City Diner. So, what's the problem, did you not pay the protection money on time?
RUBIN: I come from a day when we read Pat Bruno and Phil Vettel, reviews by passionate and well-informed journalists. And I have respect for professional bloggers, and I think it's very interesting what's happening. And it's nice that in this day and age everyone has a voice. At the same time, everyone has a bad day now and again, and I'm thankful to live in America where everyone can say what they want.

[From the back of Eleven Lincoln Park, Jeff Garlin – an old buddy of Rubin's – comes by the table. I have to ask him?]

Jeff Garlin, can you talk some shit about your friend Rubin?
GARLIN: He's a lovely man and crazy passionate. And the food at both his places is all about the attention to details, making sure everything is right. There's no thoughtlessness or cheapness about what he's serving here.

But Jeff, can you talk some shit about Rubin?
GARLIN: I've actually filmed him doing his spiel about the food and the restaurant. Next summer, I'm shooting a movie in Chicago, part of which will be shot at Eleven City Diner on Wabash, and a character will be based on this guy, played by a friend of ours. And when he opens in L.A. [note: Rubin has plans for West Coast expansion], I'll help spread the word at the studios there. Deli is my favorite food, and L.A. is a great deli town?but nothing like this.

[Jeff Garlin leaves, and Rubin and I continue talking.]

Kind of stereotypical running into Jeff Garlin here?
RUBIN: It is, and you know, we named a salad after him. The Jeff Garlin. He eats really healthy when it's here. So he's got his own salad.

He probably eats for free, huh?
RUBIN: No, no, Jeff gets a bill. Hey, I'm in business here. I'm in this to make money.

[Several very large sandwiches arrive; each as large as my head; corned beef and pastrami spilling over the sides.]

With sandwiches like these, do you take any responsibility for the rising obesity rates in America?
RUBIN: No. No. We're all grown-up boys and girls here, and we offer many healthy options if that's what people want. It's their choice.

Because of my charm and intelligence??
RUBIN: ?and your chutzpah.

The pastrami is fantastic. Hey, I'm a child of the Sixties, so in closing, I have to ask: are you any relation to Jerry Rubin?
RUBIN: No.
· All Eleven City Diner Coverage [-ECHI-]
· All Eleven Lincoln Park Coverage [-ECHI-]
· Eleven City Diner [Official Site]
For all food, all the time, follow David on Facebook (DCHammond) and Twitter @DavidHammond.