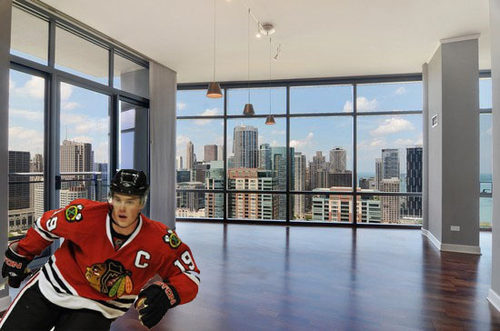 LAKESHORE EAST— Blackhawks Cap't Jonathan Toews now has two Stanley Cups to go with his two condos. He's trying to change that, though, and is nearing sale of his condo at 450 E Waterside Drive. The proud owner of a similarly-sized but higher-floor unit in a neighboring building, Toews' $1.7M pad has lost its luster.

HOTELS WEEK 2013— Visit and revisit Curbed's many and varied features on hotels airing over the past week. Hotel developments, tours, lists, maps, and a Bad Hotel Reviews Power Hour are highlights. Whether scouting a vacation or staycation, pick a lens and dive in!

SOUTH LOOP— The architecture firm Gensler has been selected as designer of the McPier hotel, a forthcoming development set to deliver another 1,200 rooms to the Motor Row/McCormick Place area. The hotel is decidedly less controversial than the DePaul arena (and casino?) planned for the other side of Cermak, but it would still behoove McPier and taxpayers to demand good design.

THE LOOP— In a completely unnecessary but awesome exercise, Crain's solicited fanciful visions for the reuse of the city's abandoned train hub beneath Block 37. This, following a tour of the sealed off tunnels which were mothballed in 2008. Check out the renderings and schemes, everything from an underground nightclub complex to a "subterranean urban logging" facility.