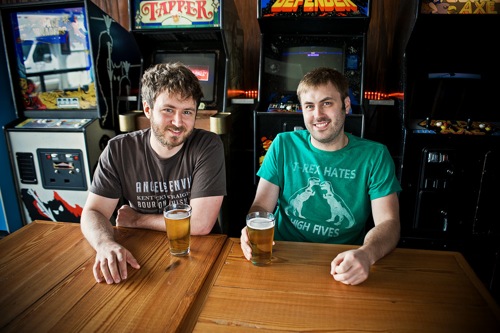 Although it wasn't the first in the country, Highland Park natives Danny and Doug Marks brought the arcade bar theme to Chicago when they opened Emporium Arcade Bar a year ago. Since then, two other arcade bars have opened (Headquarters Beercade and the subsequent pinball expansion, and Replay). The Marks brothers' first bar created buzz months ahead of their secret opening, and it was packed with nostalgic forty-something gamers, twenty-something bar flies, and craft beer aficionados from jump. A year later, that hasn't changed. Danny and Doug chatted about the opening, the first year, their expansion opening tonight, and what's next.

How did this project come about?
Danny: For us, we're brothers, and our family has been in the entertainment industry in Chicago for decades. Starting in the early 60s they had the movie theaters, the twin drive in was their first one. They were building theaters up until 1989 when they sold to Lowe's. They built Webster Place, Old Orchard in Evanston, 10-15 theaters around Chicago. Arcades, roller rinks, bowling alleys. So this has been and still is in our blood. I moved to New York for a couple years and got a job as a manager at a place called Barcade which is the best known arcade bar in the country.

Doug: I was working in the nonprofit world in Chicago since I graduated college, I wasn't working in bars in any way shape or form. The way the stars lined up is that I was leaving my other job and Danny was coming back here to do it, he asked me if I wanted to join and I said let's go for it. The last year now feels like a very long background in the bar industry.

How has business been in the first year?
Danny: Even three months before we opened, our response was better than we could have expected. We had tons of Facebook and Twitter followers before we opened, and then even that first night we secretly opened and didn't have our tap lines working, people were lining up to get in and we didn't even make any announcement. Since then we've stayed really crowded and business is going great. The response has been overwhelming, we'll stand outside on a Saturday night and people will walk by and say "oh that's the arcade bar, it's my favorite place in the city."

It's been a steady climb?
Doug: I wouldn't even say steady, I'd say it came out with a bang. We didn't have to do what a lot of bars and restaurants do, they work really hard to publicize the fact that they're opening, I think our concept was built for blogs and social media because it's arcade games, it's beer, you're hitting so many niches that already exist on the internet. We still have people come in here for the first time, and you can tell because they'll walk the entire room and their eyes go wider the further they go. They see games they haven't seen in 20 years and they just sort of can't contain their excitement.

What do you attribute the interest to?
Danny: I think it's a combination of things. It's a nostalgia thing: People in their late twenties, early thirties, up to their late thirties remember what they did as kids and now they can do it as adults and I think it's the whole nerdy-is-cool thing. 10 years ago, if someone pulled their laptop out in a bar, you'd laugh them out the door. But now you don't even think twice about it.

Doug: I think it's also just fun. We get a lot of people who are really into the games, we get a lot of people who just want to bring a group and have their 30th birthday here or their office party here. You see those people every day but here you get to go, you see them, and you go off and play your games. We also have a really good beer selection that interests a lot of people. There's people who never heard of any of the beers but are interested in trying them.

You've forged a lot of partnerships with craft breweries.
Doug: We put a lot of emphasis into our beer list. We hold a lot of events—the first one we did was called Duck Duck Goose with a Duck Hunt tournament and 20 Goose Island beers. Those partnerships with craft breweries are great—they're getting big enough now that they're becoming real businesses but they're not so big that it's like teaming up with Budweiser where we give them money and put up a Budweiser sign up and that's it. It's really still a grassroots thing.

All of the arcade bars here seem to have different vibes. Do you feel like you've started something in Chicago?
Danny: I feel like we're part of a wave. I'm not going to say we started this, because obviously I worked at a place like this in New York and came here to do it so I'm not going to be like, "this was our idea, you guys are copying us." Like the Picasso saying, good artists borrow, great artists steal. Would we prefer to be the only one of something? Sure. But so would every business. In America if you do something successful, someone else is right behind you.

Doug: I think we served sort of as a proof of concept in a way. We showed that this is something Chicago wants, pretty much from the get-go. I don't think it's like movie theaters where there's room for one in every single two-mile radius but we'll see. We've talked about possibly opening more locations, in and around and far away from Chicago. But I'm not really sure how many craft beer arcade bars Chicago can keep in business.

What's next?
Doug: Tonight's the one-year anniversary party. A couple months ago we started stock piling breweries' anniversary beers. We have a cooler filled now with 15-16 that we're going to put out.

Danny: The expansion is our next big step. We're almost doubling in size so we're going to have a lot more of everything, a lot more video games, a lot more pinball machines. We also have a 20-foot movie screen and a stage, so we're going to do movie nights pretty regularly. We're talking about doing dinner and a movie, teaming up with local restaurants, hosting everything from bands to DJs to different shows and events. There's also a second bar.

We've been super fortunate, it's really blown our projections apart. We've worked hard to maintain it and not rest on any sort of laurels. Obviously we have more competition than we had when we first started. You have to keep trying to do interesting stuff all the time because there is no shortage of things for people to do in Chicago.
· All One Year Ins [-ECHI-]
· Emporium Arcade Bar [Official Site]
· All Emporium Arcade Bar Coverage [-ECHI-]