Seitan in the City: Upton's Naturals to Open Vegan Cafe Next Month

Share All sharing options for: Seitan in the City: Upton's Naturals to Open Vegan Cafe Next Month 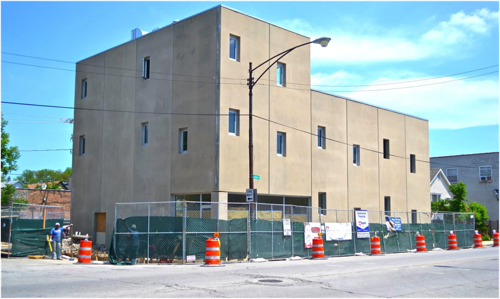 Upton's Naturals, a Chicago-based seitan manufacturer, is currently constructing a brand spanking new 9,000 square foot processing plant at the corner of Hoyne and Grand with July targeted for completion. The future home of Upton's Breakroom, a vegan cafe that will serve breakfast, lunch, dinner, snacks and non-alcoholic beverages, is attached to the plant. For those that may be unfamiliar with seitan, it is a protein dense, wheat-based meat substitute and is pronounced 'Say-Tahn.'

Restaurant ownership is a new venture for founder and President Dan Staackmann and Vice President/lady friend Nicole Sopko. Both live a vegan lifestyle and claim that 50 percent of Upton's Naturals clientele are not vegetarian or vegan, so they intend to keep things simple and straightforward when it comes to the café offerings.

"We will do a few things really well and add from there," Nicole says.

The menu, which will be 100 percent vegan, will include made-to-order sandwiches along with grain and vegetable bowls that feature their seitan products, a few sides, and a handful of house-made desserts. Beverages will include coffee from local roaster Bow Truss, Kombucha and "farm to bottle" juices from Columbia Gorges out of Oregon. There is even talk of offering vegan soft serve in the future.

The cafe will be open seven days a week, seat 16-20 people, and will be managed by Jeff Winkowski, who's resume includes two stints at The Chicago Diner and one at Lake Side Café, which is now closed. Both restaurants are vegetarian.

Nicole is also a practicing yoga instructor so it only makes sense that the third floor will have her own yoga studio that will double as a vegan fine dining popup dinner space, both are expected to launch this fall.

Confirmed popup guest chefs include Isa Chandra Moskowitz of Post Punk Kitchen and chef Mark Mebus of Blackbird Pizzeria in Philadelphia. The vegan popup dinners will use a ticketing system, which seems to be quite the trend these days.

When asked if they have a message to seitan skeptics, Nicole answered, "We believe that seitan is a real food and not fake (meat). It's been around for thousands of years and is minimally processed." Staackmann says the company had triple digit sales growth in 2012.

You can try their products at select restaurants and Whole Foods locations across the country, in addition to many specialty stores in Chicago. Or you can wait another month, give or take, for Upton's Breakroom to open.
· Upton's Naturals [Official Site]