Where to Head For a Beast of a Feast

Share All sharing options for: Where to Head For a Beast of a Feast

Eater contributor Catherine De Orio is a blogger, writer, entrepreneur, Check, Please! finalist, TV and radio personality. In her weekly Tasting Trends piece, she scours the city for what's trending on the dining scene and where you can taste the trend. Follow her culinary adventures on Twitter @CatCalls. This week's trend: Whole Animal Service. 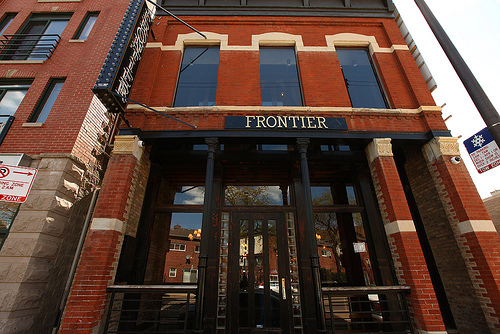 Pig roast (and lamb for the Greeks amongst us) season is on! And thanks to a few places around the city, you don't have to stand over your smoker or spit-roaster for an entire day to enjoy the primeval pleasures of crackling skin and succulent meat right off the bone. As the nose-to-tail eating trend roots itself in the mainstream, chefs are giving diners the option to go whole hog?or goat and even gator. Brian Jupiter, executive chef at Frontier Restaurant, chatted with Eater about his whole animal offerings including pig, suckling pigs and lamb as well as more exotic options of wild boar, goat and alligator. "I appreciate farm-to-table, but I'm also going from the wild to the table," he laughs.

Frontier's menu is known for its gamier options. "This is the way we were supposed to eat," Jupiter explains, "Game is so much healthier, there are no hormones or antibiotics." So standing firmly behind that philosophy he offers meats ranging from bison to boar in addition to more traditional options. But the jewel in the menu's crown is the whole animal service. On any given week, he is serving close to twenty whole animals and some Saturdays there will be eight or nine whole animals served. Pig is the most popular amongst diners, followed closely by wild boar, which is Jupiter's personal favorite. But Jupiter is always looking for something to keep his menu fresh for diners. "Whole pig alone wasn't adventurous enough for me," he says.

Hailing from New Orleans, Jupiter called on connections down south and eventually began to source whole alligator for the restaurant. They range in length from five to seven feet and weigh in at about thirty or so pounds. Currently in season, he prefers wild alligator, as they tend to be meatier without the excess fat farmed gators tend to carry. "People go crazy for pork fat, but alligator fat isn't like that, it doesn't taste good." And while all of the whole animals garner gapers when brought into the dining room, "the alligator gets the most attention."

Jupiter prepares the beasts before smoking with injections of a brine made with brown sugar, vinegar, Cajun spices and garlic to ensure the juiciest meat. "I inject it into all the muscles and tendons," he explains, "you can see the pattern of injections when it is cut up." Next step is giving the animals (except the pig as it doesn't penetrate the skin) a rub down with his seasoning blend. After, the wood is chosen for use in the smoker. Although he mainly uses apple and cherry wood, Jupiter says they may opt for mulberry or sugar maple woods when he wants sweeter smoke. Once the animal is brined, rubbed and wood selected, it is transferred to the smoker to cook for hours, an average pig taking anywhere from six to eight hours.

All of the animals are smoked with the exception of the alligator, which he roasts and finishes in the smoker to impart flavor, but prevent the lean meat from drying out. The impressive smoker at Frontier is quite large and can hold up to eight animals at a time. "We built on an extra room just to house the smoker," Jupiter says. Once cooked, the animal is brought to the table whole (allowing diners to 'ooh,' 'ahh' and snap their social media pics) while it rests and reabsorbs all its flavorful juices before being carved and served.

Jupiter has a list of reasons one should indulge in an entire animal at one sitting. He says it's great for a large group and it "invites conversation while dining." Ordering a whole animal offers an educational experience as well explains Jupiter. "Everyone has had bacon, ham or a lamb chop, but this is educational in a sense," says Jupiter, "You get to see where it all comes from." So as he carves the animal tableside, explaining the parts as he serves so diners can compare and contrast each cut and decide what it is they prefer. Are you a butt or belly kind of person? "Not many people understand the whole animal, but when you get the whole one, you can compare it all," he says. And of course there's the flavor. Meat straight from the bone just 'tastes better."

The menu is always changing as Jupiter continues to source new animals. "We are not stopping at this, we are always looking to see what we can do whole," he says, "I can definitely tell you that llamas are up next," he says.

Want to feast on an entire beast? Then head here to taste the trend:

Frontier | 1072 North Milwaukee Avenue | 773.772.4322
Providing the broadest choice of whole animals for cooking, Jupiter also works one-on-one with those who have a special request for a specific animal—if you can think it up and he can source it, you can have it. Whole animals need to be ordered three to five days in advance. Typically one animal will feed anywhere from 12-20 people and is accompanied by two types of sauces, one a white Alabama-style sauce of horseradish and vinegar as well as tomato-based Texas-style sauce. In addition to the main course, a slew of sides like mac & cheese, Johnny cakes, caesar salad and succotash are included as part of the meal.

Publican Quality Meats | 825 West Fulton Market | 312.445.8977
The Publican | 837 West Fulton Market | 312.733.9555
Lately One Off Hospitality Group seems to be collecting awards for sport with chef-owner Paul Kahan bringing home a James Beard award this week and executive chef Cosmo Goss as the newly anointed Cochon 555 "Prince of Porc." Both The Publican and Publican Quality Meats offer diners the option of ordering a whole pig (suckling or larger) and lamb to be cooked in advance and served whole. At The Publican diners can enjoy their beast in the restaurant and at Publican Quality Meats, whole animal service is available for private events held there. Be sure to order at least a week in advance.

Two | 1132 West Grand Avenue | 312.624.8363
Executive chef Tom Van Lente demonstrates his passion for nose-to- tail cuisine throughout the restaurant's butcher-shop inspired menu. A whole animal meal of smoked pig requires ordering a week and a half in advance so he can source the animal from local farmers.

Mercat a la Planxa | 638 South Michigan Avenue | 312.765.0524
The traditional Spanish dish Cochinillo Asado, or whole roasted suckling pig, is the signature experience here. But for those who can't commit to a whole animal, check out the new Cochinillo Asado Sunday Supper series, a four-course menu featuring the restaurant's signature suckling pig, along with additional tapas dishes and a craft beer pairing.

Three Aces | 1321 West Taylor Street | 312.243.1577
This casual Taylor street gem offers whole pig, lamb and goat for in restaurant dining—just be sure to order a few days in advance.