Share All sharing options for: Impertinent Questions with David Dworshak

Eater contributor David Hammond is a co-founder and lead moderator of LTHForum.com, has written the weekly Food Detective column and now for Splash! in the Chicago Sun-Times and he's the food columnist for the Wednesday Journal. His cable television series "You Really Should Eat This" focuses on must-try dishes in Oak Park, Illinois. 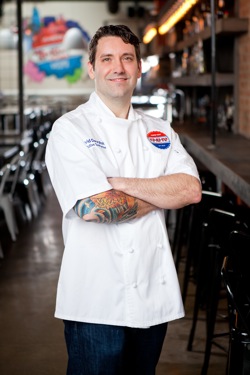 David Dworshak, formerly of Carnivale and Spring, is executive chef at Takito Kitchen. Since last year, Eater has covered the evolution of this still relatively new restaurant, which promises a fusion of Mexican, Asian and other world cuisines.

Dworshak has received much love from Chicago food writers like Kate Bernot at Redeye and Mike Sula at Reader, both of whom posed something like the first question we had for Dworshak. We thought we'd start easy.

Really, does Chicago in general or Wicker Park specifically need another taco joint? Really?
Well, it does seem to be one of the trends of the moment, but if you can offer something different, a different take on it, then you can eke out a little room to hold your own. That's why I intentionally did things a little differently than some of my competitors in the area, you know, like infusing flavors in the tortillas—we have hibiscus and sesame—so we're showing a more global influence in our choice of ingredients.

We're also serving some items that reflect some of my go-to Chicago Mexican restaurants. One of my favorite Mexican places is Cemitas Puebla. The owners there travels to Mexico regularly to pick up authentic ingredients and their commitment to quality is amazing. Our pork belly taco was inspired by the sandwiches there; the sesame taco was directly influenced by the cemitas bread.

I had dinner at Birrieria Zaragoza and was inspired to put two goat specials on the menu. We sourced our goat meat from Kilgus Farms, and we sold out. People loved it. We prepared it the same way as at Zaragoza, with chile arbol, tomato, salsa, in the traditional style. Only problem is, goat is fairly expensive, and we're trying to be a more affordable restaurant, so it was not really working out for us, though I'm going to keep goat on the menu as a recurring special.

So, where does a guy with the last name Dworshak get off cooking Mexican food?
Ha ha, that's a fairly fair question. I haven't even spent that much time in Mexico, but I did work at Carnivale for eight years, and my mentor in life, Mark Mendez, and I cooked together for like ten years, and he taught me about the music, the food, the language.

But you know, someone goes to French culinary school, and they're cooking French food, that's fine for them. They're making French food and no one asks questions like that. But if I'm cooking Mexican food some people might think, "Oh, but you're not Mexican," but people always cook other styles of food that doesn't come directly from that heritage. It's a craft you learn, and you have a tool box of flavors you can use, and you put your own personal style to it.

Mendez once said to me, "I can tell how old a chef is by looking at his menu." What he meant was that younger chefs tend to show how awesome they are by loading on a lot of ingredients, whereas Mendez tends to prefer to highlight just three or so ingredients. Looking at your menu, I'm guessing you're a young man?
Ha, well I try to walk the fine line. I'm a huge fan of what I call "the magic bite," where you have all the different flavors going on at once, all the textures, I don't want the diners to have be seeking out or trying really hard to put it together. That's why I love tacos, because you can put all those flavors together there on one bite. But what Mendez said makes sense: he's a little bit older in his career and he's confident and he uses killer ingredients. I try to stay somewhere in-between.

Given the Mexican influence on your cuisine, how is it that you're not serving shitty seafood?
Mexican seafood is very interesting stuff, but some of it just didn't make the cut because you can't be all things to all people. So I just try to stay focused on what I can execute well in this tiny space. "Takito," phonetically, means like a small taco, and we have a small space here, so...

One thing I learned from Mendez is a Peruvian style of seafood preparation called "tiradito," which means "small pieces torn up." I think it's amazing and I wanted to do something different than other people were doing. Tiraditos have all the flavor of ceviche, but unlike most ceviches, you just put a little lime juice on the plate right before you serve it, so the lime juice flavor is there, more as a garnish. And we use very high-quality fish. I had three of these on the menu at Carnivale, and they sold very well, so we're going to keep it going. (But) it's not really authentic Mexican.

So you don't care about authenticity?
We're kind of serving a "Mexican melting pot." There's a lot of foreign transplants in Mexico, and that immigration for other parts of the world has influenced Mexican culture, and food and language. Like at Cemitas Puebla there's a serious Middle Eastern influence, and in Peru there's a Japanese influence, so in modern day Mexico there's a lot more going on than just traditional Mexican cooking.

I love Peruvian chiles, aji, Amarillo and so on. My fish taco is really Southeast Asian influenced, almost like a banh mi because of the carrot slaw and the coconut custard, fish sauce, lime, chilies, turmeric. That's probably the wackiest one that takes a lot from other cultures.

And I saw ghost peppers on the menu, and that's Indian, right? But really, in the way of heat, is that all you got?
We also have scorpion chiles [Note: ghost peppers clock in at 1.5 million Scoville heat units; scorpion chiles are at two million]. We have a local farmer who grows them for us.

Do women ever order scorpion peppers?
Well, they order the ghost peppers, but hardly ever the scorpions, because those sound like something that is really going to light you up. We actually serve it in a pipette, so you can get a little bit at a time. But I want people to experience the flavor without being blown away.

Lot of empty tables here. How's business?
We're doing much better than projected. And it's only 6 p.m. Are we about done with this?