Share All sharing options for: Chefs Show Their Soft Spot for Crab

Eater contributor Catherine De Orio is a blogger, writer, entrepreneur, Check, Please! host, and TV and radio personality. In her weekly Tasting Trends piece, she scours the city for what's trending on the dining scene and where you can taste the trend. Follow her culinary adventures on Twitter @CatCalls. This week's trend: Soft Shell Crab. 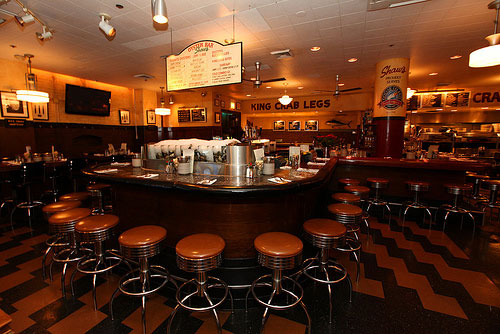 Soft shell crabs are a symbol of the spring season. And although the chillier than normal (even for Chicago) temperature is not very sping-like, menus across town are celebrating the season with soft shell crab specials in abundance. Eater spoke to Steve LaHaie, managing partner of Shaw's Crab House about this seasonal crustacean.

Soft shell crabs are just regular old crabs (usually Maryland blue crabs in the United States) that have recently molted their hard shell as part of their growing process and have not yet grown a new one. It's said they are influenced by the phases of the moon and they begin to shed their shells on the first full moon of May. That is, however, a rough estimate.

"Maryland season opens May 15," says La Haie, "But prior to that you can get them from South Carolina and Louisiana." He says people start asking for them in April so they will usually have them on the menu a bit before the Maryland season starts. "This is a great seasonal item, it's a menu favorite," says LaHaie, "in season we get about 35-40 orders a day." And the season is relatively short. "It runs until about mid-September, but that's all weather dependent," he says.

The catch with soft shell crabs is the harvesting. It is particularly time sensitive. The window of time between the molting of the crab's shell to the forming of a new one, during which time it is still soft, is very short. One to three hours short. So as in many things in life, the timing is everything. Consequently, the crabs are usually harvested before they shed their shell, transferred to shedding operation tanks and monitored very closely. Since crabs need water to form a new shell, they are pulled from the tanks as soon as molting is complete and prepared for sale. And sell they do as people can't seem to get enough of them.

Soft shell crabs are juicy, sweet, with a hint of brininess, and just a touch of crunch from the soft shell. But many will argue the best part about them is the entire crab is edible--gone is the laborious task of picking out the bits of succulent goodness from the shell. "You can eat the whole thing," says LaHaie, "there is the crunchy texture from the soft shell and you get all the body meat. They are much easier to eat."

Everyone has a way they prefer them prepared: pan-fried, battered and deep-fried, roasted, grilled and the list continues. It's all a matter of preference. Boiling or steaming them is the only preparation method that will leave you with a lackluster final product as the meat will become mushy. When it comes to the preparation of soft shell crabs, LaHaie is a purist.

"If you over-embellish and put too much on them, you can cover the inherent flavor of the crab." At Shaws, they offer soft shell crabs that are in a sandwich, sautéed and tempura battered, deep-fried and used in a spider roll. But should you prefer a traditional preparation, sautéed and served with lemon or garlic butter and almonds, it's not on the menu but "they are happy to oblige."

The season is short, so head to one of these spots to taste the trend:

Epic | 112 West Hubbard Street | 312.222.4940
Executive chef Matt Pollock soaks Chesapeake soft shell crabs in buttermilk, lightly dusts with starch and pan-fries them until crispy. They are served in an earthy morel bisque of morel mushrooms in their own reduction which is finished with a trifecta of shallots, butter and cream. An accompanying herb salad of fennel frond, chervil, parsley leaf and chive lightly seasoned with sea salt and topped with shaved black truffle lends a balancing burst of freshness to the rich dish.

Bistronomic | 840 North Wabash Avenue | 312.944.8400
Chef Martial Noguier and his culinary team are featuring a special of soft shell crabs that have been dredged in flavorful seasoned flour pan-fried and served with a rich lemon-caper brown butter sauce. The crab is accompanied by a watercress salad filled with snow peas, spring radishes, orange and fresh basil with a grapefruit dressing.

Terzo Piano | 159 East Monroe Drive | 312.443.8650
Their newly launched menu with expanded offerings will feature a soft shell crab option in its small bites section. The crab is lightly seasoned, topped with a dollop of Calabrian chili compound butter and cooked in a salamander (so the heat comes from above rather than below). As the butter melts itbastes the crab as it cooks resulting in a rich and succulent dish.