Chicago Bartenders Show How Cool Ice Can Be

Share All sharing options for: Chicago Bartenders Show How Cool Ice Can Be

Eater contributor Catherine De Orio is a blogger, writer, entrepreneur, Check, Please! finalist, TV and radio personality. In her weekly Tasting Trends piece, she scours the city for what's trending on the dining scene and where you can taste the trend. Follow her culinary adventures on Twitter @CatCalls. This week's trend: Ice Programs. 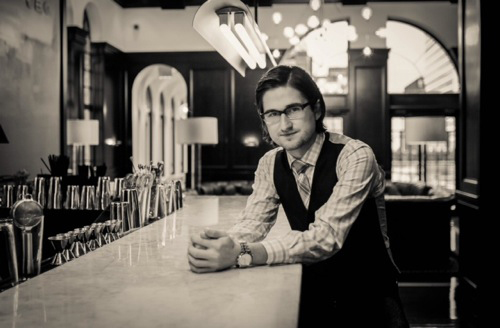 The most thought the average person gives to ice is whether or not they want it in their drink. And in the not too distant past, many barkeeps thought the same way. In current cocktail culture however, ice is lauded as one of the most important ingredients to work with and bar directors have begun to implement serious ice programs in their establishments. Eater spoke to Craig Schoettler, director of the bar program at Drumbar and an ice program pioneer to learn just how cool ice is right now.

"Ice," Schoettler says, "is the cornerstone of a cocktail." A good drink has balanced flavors, is chilled to the proper temperature and has the right amount of dilution—ice plays into each of those factors. It starts with the type of ice being used to chill it and here is an instance where size does actually matter since different shapes melt at different rates. A large cube has less surface area and is able to retain its temperature for longer periods of time, thereby slowing down the melting process and thus the dilution of the drink.

"Using large pieces of ice keeps the drink cold while melting at a drinkable rate," explains Schoettler. The slow dilution rate maintains the drinks integrity for a longer period of time. So basically you can sip, not slam your whiskey.

When it comes to getting the right shape ice, there are many ways up the mountain and is often a matter of preference and budget. It can be cut from a large block (using a chainsaw-like tool), formed in ice molds, made by an icemaker (many prefer a Kold-Draft system), crushed via hand or with a machine.

But how do they make the ice so clear in comparison to the whitish cubes home icemakers turn out? That is all a matter of the freezing process. Water contains impurities, minerals and air. When the water is frozen, they become trapped and make it cloudy (much like a diamond that contains flaws, it loses clarity). Pricier icemakers use an inverted evaporation system to produce cubes under pressure, locking out air and impurities, leaving a crystal clear piece of ice.

"You can use tap water and it will be clear, it's the method of freezing that gives ice its clarity, not the water," says Schoettler.

So water doesn't affect clarity, but how about taste? Some ice aficionados will argue water needs to be distilled, reverse osmosis and/or boiled four plus times. Schoettler sheds some practical light on this by suggesting the highest quality of water, that can be justified for use in a drink that will be consumed within a few minutes, should be used. "With most waters," he adds, "in a blind taste test it would be difficult to taste a difference between the cubes." His simple rule is to use good quality.

Once you have an icebox full of options, how do you know which ice to use? "That depends on the function the ice is meant to play in the drink," says Schoettler. A large sphere or cube works well in a spirit served on the rocks, where one wants it slightly chilled with little to no dilution. Or in a drink that is stirred and the dilution rate of ice is factored into the end product, like in an old-fashioned. Shard ice (rectangular shaped ice) works well for collins cocktails, particularly with drinks that have a carbonated element. Schoettler explains how the CO2 in a carbonated beverage gets broken up when poured into a glass, thus reducing the carbonation.

However, if one pours it over shard ice, it will retain more intact and therefore have more fizz. Common cubed ice (each barkeep has their own favorite size) is used when "you want to dilute it quicker to open up the cocktail a bit." This is also what a bartender will shake on since it maintains its integrity with agitation. And for drinks that call for diluting and chilling the spirit simultaneously, like a swizzle, crushed ice is used. And it is also the ice of choice for drinks that are built right in the glass like the mint juleps that will be served at Derby parties around the city this weekend.

And as cocktails have become more sophisticated, creative mixologists are using flavored ice to add an extra layer to their creations. "Ice is essentially an ingredient in your cocktail, "stated Schoettler, "since it melts, you end up drinking it with the cocktail thereby becoming a part of your drink." He says that since it is water-based, you can make flavored cubes with anything water based—fruit juice, tea or "stocks" flavored with steeped ingredients like chili peppers or cinnamon. He says the important thing to consider is how ice plays with the drink.

"The first sip tastes like one thing and then at the end of the drink it tastes different because it is more seasoned with the taste of the cube," he says. One must consider how it tastes in its application when making flavored ice cubes. As a general rule it needs to be more intense since "anytime something is chilled, it inhibits the reception of flavor on the palate." It needs to be intense enough so you taste it from the first sip and it shouldn't have to melt completely to get the effect.

Flavored ice cubes appear regularly in Schoettler's cocktails. Cinnamon cubes add warm notes to a pear cocktail while a Fresno chili cube spices up a margarita. As the warm weather is finally arriving, look for more playful creations at his rooftop bar.

Chill out and head to these places to taste the trend:

Drumbar | 201 East Delaware Place | 312.943.5000
Schoettler is gearing up for a summer of fun (especially during their Sun-DAY parties) on the outside terrace at Drumbar. Armed with a whole load of new bar toys, expect to see liquid nitrogen, frozen cocktails, spiked slushies, tapped Moscow mules over crushed ice and upscale tiki drinks.

Storefront Company | 1941 West North Avenue | 773.661.2609
Chef Bryan Moscatello's "kitchen cocktails" utilize seasonal ingredients and techniques to develop his signature libations. Currently on offer is a sweet anise cocktail served with a large fig ice cube made from ripe, pureed and seasoned figs. As you drink the cocktail, the ice cube melts, adding flavor which continue to evolve as you drink it.

The Glunz Tavern | 1202 North Wells Street | 312.642.3000
Christopher Donovan has the right ice for every libation—whether you need crystal clear cubes, shaved or cracked ice. A favorite is the large blocks of ice he makes in-house and forms using a spherical ice press to produce perfectly round, clear sphere which are then served with one of the fine whiskies he has on offer.

Embeya | 564 West Randolph Street | 312.612.5640
When the patio opens in a few weeks, beverage director, Danielle Pizzutillo, will make large blocks of ice flavored with bitters, tea or fruit, shave it snow cone style and add the cocktail to the ice and garnish. Look for the shaved old-fashioned bitter infused ice made with Buffalo Trace bourbon, falernum, lemon, and a mint/lemon wheel garnish.

The Violet Hour | 1520 North Damen Avenue | 773.252.1500
One of the first bars in Chicago to incorporate an ice program, they continue to take it seriously using at least eight different types of ice in their extensive cocktail menu.

Charcoal Bar | 702 North Wells Street |312.988.7864
This eleven seat cocktail-den is located under hot spot Sumi Robata Bar. As an homage to the Japanese-style of bartending, bar director Matthew Lipsky will garnish drinks with a hand-carved ice sphere, cut with a Japanese saw from 300 pound blocks of ice. He chips each sphere by hand, creating a perfect circle to ensure drinks like his signature Old-Fashioned is cold, but not diluted.

Rebar | Trump International Hotel & Tower Chicago | 401 North Wabash Avenue | 312.588.8034
This swanky hotel lounge has large scale, multi-distilled, completely transparent ice cubes, but it's the cubes smoked with rosemary and cedar as well as their cubes incorporating natural element like strands of wheat and fresh citrus that add a hint of flavor and a lot of style to their cocktails. Their Hirsch Gupta cocktail combines Hirsch selection bourbon with creole bitters, a touch of maple syrup, aflamed orange peel and is cooled with smoked ice cubes.

The Berkshire Room | AMCE Hotel Company | 15 East Ohio Street |no phone yet
The bar program at this River North lounge set to open next month will be headed up by Ben Schiller, so we know we are in for a treat. His bottled cocktails will give patrons the choice of three different ice options. First up is a sweet and sour flecked gin-based cocktail that can be paired with your choice of ice: a clear, flavorless hand-carved piece of ice; a rotating herb/vegetable ice made in-house or a rotating berry ice made in-house. The bottled cocktail will change quarterly while the three different ice preparations will change week-to-week based on what's fresh and in season.

The Aviary | 955 West Fulton Market | 312.226.0868
This is one of the premier ice programs in the city with upwards of 25 different styles of ice being made in-house any given week—the selections are always changing, always creative and always worth checking out.