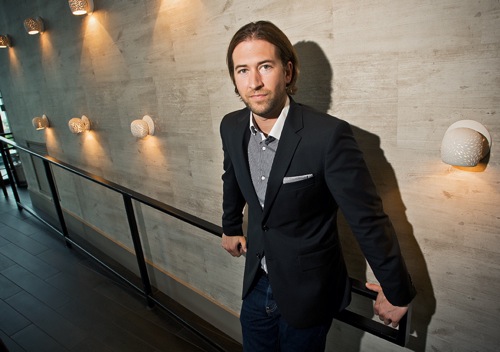 A northwest suburban kid, Chris Haisma moved to the city at 18 before splitting for the West Coast and spending his twenties working in L.A. restaurants. He met the Boka guys through an L.A. regular, starting him on a path back to Chicago. After signing on as the opening general manager at G.T. Fish & Oyster, Haisma was promoted to Director of Operations and opened The J. Parker late last July. He oversees Boka in addition to those two, bouncing between all three on a near-daily basis.

Entering the first full patio season at the year-round rooftop restaurant and lounge, The J. Parker has quickly become one of the hottest spots in town due to the unobstructed lake, park, and skyline views from atop the Hotel Lincoln and above Perennial Virant. Haisma sat down for a chat about the crush of people, how weather affects business, and 1800-cover Saturdays.

How do the seasons affect business for you guys?
It's a whole different animal in the summer than it is in the winter. The inside is a little more of an intimate cocktail lounge. But come summertime when the patio opens up and the nice weather comes it becomes a very high volume, high-energy sort of place.

How much time do you spend watching the weather?
There's a lot of that, that's for sure. Once the weather's great, and it's nice everyday, it's not so much depending on the weather at that point. But it's certainly a different beast altogether.

This is going to be your first full spring/summer season. What are you expecting for this season compared to late July/August last year when you opened?
We definitely have set ourselves up to handle the expectations. People know about it now, too. Last year when we opened in the middle of the summer, word spread that we were open, but this year, the phone's been ringing ever since the first sunny day. It's a beautiful rooftop with a beautiful downtown skyline and views of the water.

Is it busier than last year so far?
It's still early, so I would say it's about the same. A lot of people would call or they would come up during the wintertime and they didn't even realize we were open year-round. We've got this beautiful bar inside with craft cocktails and great food, but a lot of people thought it was just a patio. So it's a little different than last year because we opened during the summer.

You had your busiest day ever last Saturday?
It was such a beautiful day we started off the day at 9 a.m. doing brunch for 125 people after a wedding. Then we had birthday parties and things like that so it was just a big day for us. A lot of people coming through.

What was the wait like for people to get in?
Who wants to go to a place they have to wait a couple hours to get in? When we get to capacity upstairs, then we'll take your number down and we'll text you. We'll able to seat people after 45 minutes to an hour at the most.

What is your typical day like?
Where I am is just where I'm needed most on that day. If it's 90 degrees and sunny during the day, I'm going to stay on the rooftop. If they need me at Boka, I'm going to be at Boka. It's just seeing where I need to be to support my team.

A lot of things have changed with the food menu. What kind of feedback have you gotten?
When we opened I'm not sure anyone expected the volume that we are doing. So we changed it to be more rooftop summertime small bites. That's where it is right now, shared plates. That's what's hot right now.

How about the cocktail menu?
Tony (Selna) is super talented. He and I have known each other for years; we worked together in Los Angeles. He was the first guy I thought of and he's been a great fit for the patio. He's fun and energetic and his cocktails are super fresh and clean. His drinks can be pretty labor intensive, but it comes through in the quality of the cocktail.

How tough is it to get in during a Saturday night rush?
We don't take reservations. We do have the ability to book tables for events—we'll have birthday parties, bachelor parties, whatever they might be. We have 15 booths that we can book out for people. You can come right up and as long as we are not at capacity then you'll be fine.

How quick do you reach capacity on a Saturday night?
It depends. Because it gets pretty busy during the day on Saturday, we could hit it at 1:00 or 2:00 in the afternoon.

How many covers do you do throughout a whole Saturday?
We'll do upwards of 1800 covers.

Are there any tables that are high in demand?
There are certainly prime seating areas, especially at a place like that when you're overlooking the water right outside the glass on the couches. There's really not a bad view in the house. But when we say it's first-come first-serve we certainly honor that, but we help people out.

What kind of VIPs do you get in there?
No Hollywood celebrities or anything like that yet.

What about the dress code? Has anyone tried to come in their bathing suit?
Not really, no. We don't necessarily have a dress code, it's a pretty casual rooftop bar. You can wear sandals or shorts and stuff like that.

What's the strangest request you've gotten from a customer there?
I had a lady ask me if would it be okay if they had a bachelorette party and she asked me if they could bring a stripper. At that point I didn't know if she was serious or not. I said I'm not sure that would be appropriate for the other guests. She was dead serious.

What's the one Gatekeeper tool that you need to do the job there at J. Parker?
Communicating with guests and with staff, that's really what it is. It's about creating an experience for people and making sure they enjoy it.

When you're not there or at Boka or GT, where do you like to go to eat or drink?
Definitely Sable. That would be the spot for me to go to have a cocktail. I really like BellyQ and Avec as well.
· All J. Parker Coverage [~ECHI~]
· All Gatekeepers [~ECHI~]
· J. Parker [Official Site]