Next Big Thing Coming to Chicago?: Tanta Opening in July

Share All sharing options for: Next Big Thing Coming to Chicago?: Tanta Opening in July

Eater contributor David Hammond is a co-founder and lead moderator of LTHForum.com, has written the weekly Food Detective column for the Chicago Sun-Times and is currently the food columnist for the Wednesday Journal. 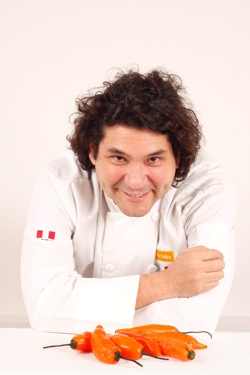 At the recent NRA show, some of the best bites were the gorgeously composed plates at PROMPeru, the Commission on the Promotion of Peru for Export and Tourism. Dishes like Wagyu with sturgeon roe and blood sausage topped with quail egg made Chef Ricardo Zarate's (LA's Piccas and Mo-chica) elegant Peruvian creations the clear standouts among many hundreds of other less adventurous offerings.

For the past few years, momentum has been building, and it's now generally accepted wisdom in the restaurant industry: Peruvian cuisine might be the next big thing in the U.S.

There's been some good Peruvian spots in Chicago—Taste of Peru, Machu Picchu, and others—but with the impending arrival of Tanta, expect Peruvian food to move from humble and delicious to innovative and...well, probably still delicious but maybe even more interesting.

Veronica Beckman is managing partner of Tanta (which means "bread" in Quechua, an indigenous language). Beckman told us that this new River North restaurant is scheduled to open in July (though like so many planned restaurant openings, that may be an optimistic projection).

Beckman was told that Zarate had mentioned at the NRA show that Peruvian chefs seemed a little "shy" about serving their homeland's cuisine, and that they sometimes relied too heavily on European traditions, specifically French.

"That is so true," said Beckman, "and that is exactly the story with our chef, Gaston Acurio. He was educated at Cordon Bleu, and he began doing traditional French cuisine at his restaurant, Astrid y Gaston."

Despite his distinctly Gallic first name, Acurio was destined to forego French cuisine in favor of the flavors of his homeland.

Beckman explains that Acurio came to the realization that with such an abundance of excellent ingredients all around him, it made the most sense to develop a distinctly Peruvian-style menu. That strategy worked. Astrid y Gaston is now at number 14 on Pellegrino's list of World's 50 Best Restaurants, just ahead of Alinea.

So how did Acurio happen to find himself working with a Peruvian restaurant in Chicago? Beckman, a born Chicagoan, is of Peruvian heritage. A few years ago, she'd dined at La Mar, one of Acurio's restaurants in San Francisco. She was still raving about Acurio's place when she visited an aunt in Peru. It turned out her aunt actually worked with Acurio's cousin. Beckman's aunt put in a call, made introductions, and thus began the partnership that lead to Tanta in Chicago.

At Tanta, Acurio is likely to practice a more daring approach to Peruvian cuisine than one might expect at some of Chicago's mom-and-pop Peruvian joints. The comparisons with Rick Bayless are inevitable; just as Bayless brought Mexican cuisine in Chicago to a new level, so too might Acurio show Chicago just how spectacular Peruvian cuisine can be.

However, the comparison with Bayless seems less solid when one considers that it took years for Bayless to expand to three storefronts (Frontera Grill, Topolobampo and Xoco), and the younger Acurio currently has restaurants in several countries and plans to open dozens of franchises in the months to come. He also has a television show and writes a considerable amount. One wonders if Acurio is not, perhaps, spreading himself a bit thin.

Acurio's dishes will show what Beckman describes as "the incredible range of cultures that come together in Peruvian cuisine." There will be Chifa dishes, for instance, which reflect a Chinese influence and include Peruvian spring rolls as well as loma saltado, a Peruvian standard of vegetables over rice. This fusion of Chinese and Peruvian cuisine, however, is no wow-it's-now fad; the Chinese have been an integral part of Peruvian culture ever since thousands of Chinese workers migrated to Peru during the Guano Age (Really. There was such an era).

On Tanta's menu will also be sashimi (a food Chicago can apparently never get enough of) showing an obvious Japanese influence, and of course there'll be traditional Peruvian food and drink including pollo a brasa (chicken roasted Peruvian style) and a ceviche bar. Absent from the menu thus far is cuy, the famous Peruvian guinea pig that appeared, once, at the now shuttered Café Salamera.

Beckman describes the Tanta interior as "an amazing space with a contemporary feel and a 20 foot skylight, finished in Ipe wood," a super-strong hardwood (some say the hardest in the world) from the Brazilian rainforest.

Helping set Tanta apart from many other Chicago Peruvian restaurants will be the cocktail menu, which will focus on pisco, the yellowish grape brandy of Peru. Planned pisco-based drinks include Chilicano which uses pisco and ginger beer—"kind of like a Peruvian Moscow Mule," explains Beckman—pisco punch, and number of other variations on the theme.

What will probably make the most difference in Tanta's future, however, is the presence of Acurio, and it will be exciting to see what a truly chef-driven Peruvian restaurant can achieve in Chicago.
· All Tanta Coverage [~ECHI~]
· Tanta [Official Site]
Gaston Acurio [Photo: Tanta]