Eater contributor David Hammond is a co-founder and lead moderator of LTHForum.com, has written the weekly Food Detective column for the Chicago Sun-Times and is currently the food columnist for the Wednesday Journal. 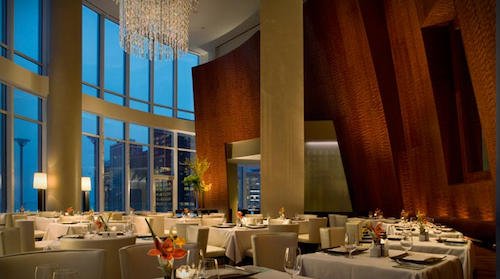 Last Easter weekend, there was a late breakfast at Palazzo Donati in Italy's Le Marche region. One of our writers was there, and one of the many things he ate that morning was a platter of snails, which may sound formidable right out of bed, but they were full of herbs, garlic and, being Italian, light tomato sauce.

Although snails are identified closely with French cuisine (heck, Americans usually even refer to them with a French name: escargots), they are much beloved throughout Europe, especially in Italy.

Back home, our writer mentioned this memorable meal to Emil Messina, a Sicilian barber at the Oak Park Arms. He asked if Messina liked snails, and he reports that Messina actually got a little misty as he said, "I love 'em. Love 'em."

National Escargot Day is coming up this Friday, May 24. All this week, some of Chicago's most notable participating restaurants are preparing snails Italian style. Many chefs will be doing classic French preparations, too, but a good number are opting to serve snails with an Italianate flair.

· Thomas Lents at Sixteen is doing "vintage Carnaroli risotto with a ragout of Burgundy snails and frog legs," a kind of Franco-Italian fusion.
· At Allium, Jason White is serving up smoked snail agnolotti with porcini mushrooms.
· Dominic Zumpano of Lake Forest's MH Fish House is working on several snail-based dishes, including an Italian version with pasta and fresh vegetables.
· Highlighting the versatility of the snail, John Anderes at Reno is putting them on pizza, perhaps the most widely consumed Italian food in America.
· At Girl and the Goat, Stephanie Izard celebrates this annual event with some new dishes, as well as her escargot ravioli, a regular pasta item on her menu.

Douglas Dussault is the driving force behind National Escargot Day festivities. Dussault sells his Wild Burgundian Snails internationally through the Potironne Company. His first customer was Daniel Boulud, and his snails are featured in Thomas Keller's The Bouchon Cookbook. Dussault started his snail import business when he was living in Wisconsin, and he retains strong local connections to many of Chicago's leading chefs who rely upon his high-quality crawling critters.

Of course, they're also damn tasty, plump with earthy minerality and pleasing texture that make them an ideal accompaniment to, for instance, pasta.