A Great Chef is Always a Welcome Guest

Share All sharing options for: A Great Chef is Always a Welcome Guest

Eater contributor Catherine De Orio is a blogger, writer, entrepreneur, Check, Please! finalist, and TV and radio personality. In her weekly Tasting Trends piece, she scours the city for what's trending on the dining scene and where you can taste the trend. Follow her culinary adventures on Twitter @CatCalls. This week's trend: Visiting Chef Series. 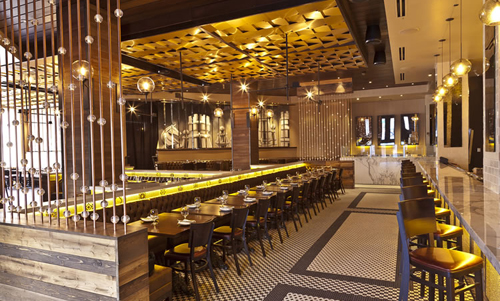 One friend calls up another friend or two to ask if they want to head to his place to hang out, cook and maybe invite some other people to join. Now imagine these friends are incredibly talented chefs and mixologists, heading to the others restaurant to cook, cocktail and collaborate while guests eat, imbibe and interact with them. Seems like the only thing missing is your invite, right? Well, luckily those are free-flowing as the growing trend of visiting chef programs sweeps the city, leaving but one question left to ask: Which party to attend?

Ryan Poli, chef/partner of Barcito/Tavernita, has been hosting these types of get-togethers under the moniker "Amigos of Pintxos" at Barcito for over a year. "The whole idea came about because I never get to see my friends because we are always working," explains Poli, "so I asked myself how do I get my friends out of the kitchen to hang out and still tie it into food." Enter Amigos of Pinxtos night. Every other Monday a few of Poli's friends, 'amigos,' are invited to join him at his River North boite, Barcito, to create small plates with their own twist. The only direction he provides to the visiting chefs is to not overcomplicate things. "I know these chefs and that what they make will be great," he says, "I want them to make it fun, delicious and as stressless as possible—less time in the kitchen means more time hanging out."

Initially Poli only reached out to local buddies, but as the event grew, he started inviting friends from around the country, including notables like John Fraser of Dovetail and Sean Brock of Husk. As its popularity has grown, he has begun to refine the event a bit by strategically deciding which 'amigos' to ask on specific nights so the evening has a theme of sorts. Everyone wins in this brilliant concept. Poli and pals get to socialize while the attendees are able to check out visiting chefs culinary chops.

Food, however, isn't the only focus at these events. Poli encourages his visiting guest to set the mood with their own playlist, to have fun and socialize with the patrons. The proceeds from the all-you-can eat $25 price tag benefits Pilot Light. Founded by Poli, Paul Kahan, Jason Hammel and Matthias Merges, the mission is to educate children on making proper food and nutritional choices though integration of these topics into their existing curriculum. With a rotating roster that reads like a line up of Top Chef Masters contestants, a worthwhile cause being supported and a laid-back, fun atmosphere, it's no surprise that this event has become a go-to weekday event.

This popular concept is expanding into other formats where restaurants feature dishes on their menus that are created by another chef as well as themed series sit down dinners. So whether you want a bite, a banquet or a bash, here are some places to try the trend:

Barcito | 151 West Erie Street | 312.274.1111
The remainder of the calendar year has been mapped out—highlights include a brother-themed night where the Poli, Sheerin, Sandoval and Tippling brothers will serve as your hosts as well as three amigos night featuring Giuseppe Tentori, Bill Kim and Mindy Segal. The list for the year includes one Chicago culinary great after the next: Paul Kahan, Matt Merges, Andrew Zimmerman, Sarah Grueneberg and Philip Foss.

Tavernita | 151 West Erie Street | 312.274.1111
The Tippling Bros. beverage duo invited a list of premiere cocktail industry pros to create a kegged cocktail to be sold each month. A portion of the proceeds benefits Freshwater Future, a charity whose mission is to ensure a healthy future for the water of the Great Lakes region. Notable guests have included Dale DeGroff, aka King Cocktail, Jeffery Morgenthaler and David Wondrich of Esquire magazine and all things cocktail.

Mercadito | 108 West Kinzie Street | 312.329.9555
Using the tortilla as a template, executive chef Patricio Sandoval leads the "Tacos for Strength" campaign which features tacos from a different celebrated chef each month to benefit Share Our Strength (a portion of the proceeds from sales of the featured tacos are donated). This month, chef Gene Kato of Sumi Robata Bar gives a refined Japanese twist to the taco with his soy-braised kurobuta pork belly tacos with pickled daikon salad. Showcasing clean flavors like shichimi togarashi, Tokyo negi onions, ginger, sake, and mirin, they are accompanied by a crisp, pickled daikon salad which adds a textural element.

Bar Toma | 110 East Pearson Street | 312.266.3110
The quarterly Dough Masters visiting chefs dinner series features chef Tony Mantuano's friends from around the country and their various pizza styles. The night typically includes antipasti and desserts from both chefs as well as the guest chef's pizza. Jim Lahey of New York's Sullivan Street Bakery and Co. restaurant kicked it off last month and the next one will be held in June.

Embeya | 564 West Randolph Street | 312.612.5640
Arising from the idea of inviting chefs into his 'home' for a night of cooking and great conversation, award-winning executive chef Thai Dang started a Monday Night Soup series at his restaurant. The guest chefs are invited to prepare their version of an Asian soup for the menu, with two dollars from each bowl being donated to Green City Market. Visiting chefs have including Food & Wine Best New Chef Jason Vincent, Trenchermen brothers Mike and Pat Sheerin, Bill Kim and Phillip Foss.

Sepia | 123 North Jefferson Street | 312.441.1920
Michelin-starred chef Andrew Zimmerman collaborates with friends on a quarterly basis, bringing a different culinary perspective to the table to complement that of his visiting chef. The chefs work together to create a memorable experience and at the end of each meal they talk to the guests and answer questions. Recent dinners have included collaborations with chef Matthew Accarino of SPQR in San Francisco and chef Gerard Craft, the reigning king of cuisine in Saint Louis. Up next is a special Cochon dinner featuring local chefs Jason Vincent, Stephanie Izard and the Sheerin brothers.

Paris Club | 59 West Hubbard Street | 312.595.0800
Executive chef Alex Ageneau hosts an ongoing French Chef Series, where he collaborates with visiting chefs from some of the world's most respected restaurants. Held every 6-8 weeks, a prix fixe menu highlights the talents of the visiting chef. In April, chef Keisuke "Kei" Matsushima, the first Michelin-starred Asian chef, will be in from Nice, France. Also on the roster are renowned chef Denis Fétisson and pastry chef Pascal Giry of Michelin-starred La Place de Mougins and Restaurant l'Amandier de Mougins. Past chefs include chef Armand Arnal from Michelin-starred La Chassagnette.