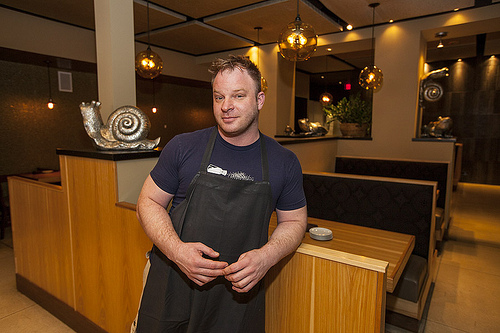 As a finicky kid in Arlington Heights, Dale Levitski grew up on Stouffer's, well-done steak, and burnt toast. He was a college athlete at Iowa State that fell in love with the "sport of line cooking," learning the creative side of cooking after moving to Chicago and shocking his mother upon deciding to be a chef. He reconcepted Sprout days after it opened, launching Frog N Snail two-and-a-half years later as a more comfortable eatery. Open for a year now, Levitzki feels that Frog N Snail has found its groove in a blossoming East Lakeview scene.

What was the genesis of Frog N Snail?
Lakeview is very congested and I felt it was underwhelming in the food scene. I've lived in the neighborhood for 14 years and this space became available and we jumped on it not really knowing exactly how the neighborhood would respond to the types of food that we were doing. There was a lot of back and forth with certain dishes that wouldn't make it here or at certain price points so there was a lot of open communication with the neighborhood. We're at a very happy medium place right now—I think putting our semi-obnoxious spin on more user-friendly neighborhood food is really where we're hitting our sweet spot.

How do you feel you've fit in the neighborhood?
There's so many people here and how many different types of fast food or tacos or pizza can you have. I'm still one of the only people around here going to the farmer's market, hopefully there'll be more chefs there this year. Having that neighborhood connection is definitely where we're headed. I think Lakeview is definitely more receptive to it and I don't think they really understood it, like "what's he doing, who's this person taking all the produce in the farmer's market." But now that they know who we are and what our reputation is I think they're definitely excited about it.

How did Sprout lead into Frog N Snail?
I think all chefs have multiple concepts or ideas in their heads. You see the pattern of chefs doing fine dining going for their three or four stars, then almost every single one of us pulls back and does a two-star where we go back to some of the food that we grew up or started cooking with. I mean there's Girl & the Goat and Little Goat. There's Graham Elliot and Grahamwich. There's Blackbird and there's Big Star. It's just kind of what our chef pattern is and what our evolution creatively and who we are to come back full circle.

How did the specific space come about?
I lived across the street and the restaurant that was here before closed and it didn't seem like anyone was jumping on it. I went to my business partner and said lets look at it. We didn't know if we wanted to open something else, we let the location dictate what we were going to do. We looked at a few places in Wicker Park, and they just weren't right. I mean that space—the place is huge—it just felt right.

You just had your Anniversary Dinner, how did it go?
It went great. We definitely have a lot of neighborhood support, which is really nice. With the weather breaking and being able to open the front doors, we only have four or five tables outside, but everyone had a great time. This is a great outdoor dining stretch right now and it's going be a very social summer.

There were some things you had to change around on the menu and with the staff. How would you characterize the first year?
It's a learning experience. Certain things you think are going to be very easy end up being more difficult. The food is fantastic and we have most of our same opening staff still, from the cooks and servers. I think that's a testament to the neighborhood and how we have a good time here. The most difficult part would be having the attention on both restaurants at the same time, I'll be back and forth a few times a day.

What prompted some of the menu changes?
We looked at the menu and figured that it wasn't far enough away from Sprout. You kind of get into your own head and your own style so we had to mix it up and offer more "affordable options." We juggled our price point around and a little bit of the style, ever since we did that I think it's been fantastic.

How did the burger come about?
I never put a burger on any of my menus before but the staff kept telling me that people are asking for one but every single place on the block has a burger. We have a certain reputation for creativity of style, so if I'm gonna do a burger I'm gonna go for it and we made it a giant monstrosity of awesome. We make homemade worcestershire sauce so we do worcerstershire mustard. We oven roast all of our tomatoes, we make all of our pickles. We use a cheese base that we whip into our own concoction. We do the buffalo bbq sauce. I even made my own montreal steak seasoning for the burger. We just decided to take a burger by the balls and go for it.

Where do you see Frog N Snail heading?
I think the difference now with what we've evolved into is that now people are excited about menu changes and look forward to it. When we were on the street before no one was changing the menu, so many places around here had the same menu for years and you know exactly what you're getting. It's like the creature of habit inside of living in this neighborhood. Now people are excited and want something new, the cycle of food that's approachable. That's pretty much been my goal from the beginning.

What are you looking forward to doing in year two and beyond?
Well I just turned 40 so maybe resting a bit more. I think between having both restaurants and getting them under control and running like well-oiled machines—I want to take my first vacation in 13 years. That's my goal.