Where There Is Smoke...There Is Flavor

Share All sharing options for: Where There Is Smoke...There Is Flavor

Eater contributor Catherine De Orio is a blogger, writer, entrepreneur, Check, Please! finalist, and TV and radio personality. In her weekly Tasting Trends piece, she scours the city for what's trending on the dining scene and where you can taste the trend. Follow her culinary adventures on Twitter @CatCalls. This week's trend: Smoke. 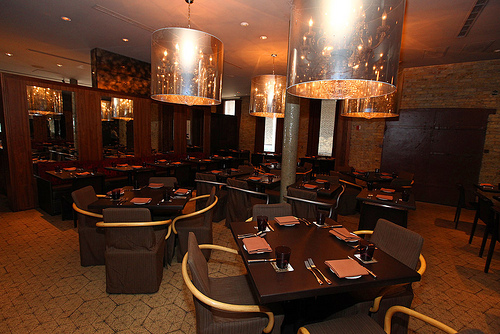 With Baconfest just passed and Cochon 555 coming this weekend, the demand for smoked food is picking up steam. Since primitive times, smoking was used to flavor, cook and preserve proteins like meat and fish. The same method is still being used but chefs have become more experimental when it comes to what types of ingredients they are smoking, with proteins making way for produce and dairy amongst myriad other things. Sepia executive chef Andrew Zimmerman chats about why smoky flavors are so hot and what he's smoking (in the kitchen!) these days to use in his sophisticated dishes.

Barbecue's rise in popularity is one reason smoked foods are in increasing demand, but Zimmerman says, "One could also argue it's a result of the bacon explosion. It was as if all of a sudden everyone realized bacon tastes good—I mean, we have Baconfest now." Smoking ingredients other than proteins, he explains, is really a natural progression: Chefs all use bacon to flavor food, which leads to making their own bacon and now that they have a smoker, they begin to see what else they can do with it.

Smoking fish or meat, as a general rule, serves to cook as well as flavor food whereas with non-protein ingredients it tends to be used more as a way to impart flavor. Adding such flavor can be accomplished through the use of an already-smoked ingredient such as bacon, tea or a spice, using liquid smoke or through traditional cold or hot smoking with a smoker.

Adding bacon is the quickest way to get a bit of smoky goodness in a dish. Bacon, however, is anything but subtle and can easily become the star of the dish when it's only meant to have a supporting role. Breaking outside of the bacon box, Zimmerman looks for creative ways to achieve a rich, smoky flavor element in a dish without having to rely on a bacon component. In his pork and prunes dish, he takes the classic combination of smoked meat with fruit, but uses the fruit, instead of the meat, as the vehicle for the smoky flavor. Steeped in lapsang souchong tea (the leaves are smoke-dried over pinewood) the sweet prunes take on a tannic, smoky flavor and are served alongside the pork to lend the dish a subtle smokiness.

Smoky surprises are seen in many of Zimmerman's dishes. He often smokes potatoes and the method he uses varies depending on the flavor and aesthetic he is trying to achieve. When served as a straight-up spud, he brines them in a mixture of salt, water and a touch of liquid smoke (which gives "control and consistency since it can be measured to the gram"). "It looks just like a regular potato, but when you bite into it, you get that smoky flavor," he says. For smoked potato gnocchi however, he places the entire tuber into the smoker to cook and give it flavor before ricing it for use as the base of his gnocchi, which is now layered with flavor. This same technique can be used with sweet onions which he smokes and purees to add to dishes. He describes it as being almost like barbecue sauce: Sweet, slowly caramelized onions, smoke and then a hit of vinegar. "Smoking gives it more intensity than just a regular onion," he says, "yet you didn't do much to it."

Smoking non-protein ingredients opens up the flavor possibilities in vegetarian dishes as well. Zimmerman cold smokes butter to use in dishes and to glaze vegetables. "I use it as a vegetarian bacon substitute," he says, "You get a smoky element to the dish without adding a smoked protein." He also makes a kombu dashi that is smoked with applewood giving him a meatless liquid that provides smoky flavor. This dashi serves as the base for a smoked kombu gelee, raked once chilled to resemble ice and served atop raw oysters. "It lends a cold, wet, bacon-y aspect to the oyster without having to throw a strip of bacon on top of it," he says.

Why would one hot smoke versus cold smoke an ingredient? Hot smoking (usually between 126-176 degrees) cooks, as well as flavors, the food. Cold smoking (usually between high 60s-mid 80 degrees) does not cook the food, allowing it to take on the flavor of the smoke while still remaining uncooked and moist. This works best with delicate foods, or those that require precision to execute properly, like when he makes his coffee cured, smoked duck breast. Since he wants it to be cooked to a specific temperature, Zimmerman cold smokes the duck to give it flavor and then cooks it after to get it to the desired temperature as "smokers are a bit more liberally gauged than a sous vide immersion circulator, stovetop or calibrated oven," he explains.

And when it comes to what one or should not smoke, it's part experimentation, but also a lot of common sense, he says. Fruits and vegetables that tend to be sweeter like butternut squash, apples, peaches, sweet onions are ideal for smoking. "A good rule of thumb," he says, "is that if it grills well, it will probably smoke well." The combination of sweet and smoke can go a step further with smoked maple syrup and chocolate—think of the now ubiquitous chocolate and bacon combination.

Whether you want it hot or cold smoked, smoky-savory or smoky-sweet, here's where to head to taste this smokin' trend:

Sepia | 123 North Jefferson Street | 312.441.1920
James Beard Award nominated chef Andrew Zimmerman likes to use smoke to infuse flavor into unique proteins as well as non-protein options. His sea scallops are paired with yellow pepper romesco, smoked paprika lardo, and almonds. Smoked char roe is added to a potato and ramp soup as well as to white asparagus "to give tiny bursts of salty, fishy, smoky flavor."

Lula Café | 2537 North Kedzie Boulevard | 773.489.9554
Smoked pecans are making their way onto many dishes on executive chef/owner Jason Hammel and sous chef Mike Simmons menu this spring. They kick morning sweets up a notch with their smoked pecan sticky bun. A bruschetta of beets, marinated kale and whipped goat cheese gets a bit of texture and layered flavor from the addition of smoked pecans while the hothouse baby spinach salad kicks candied nuts to the curb and replaces them with smoky pecans. To get the smoky flavor in your entrée, shallot-smoked clam agridolce is used in this menu newcomer of spinach cavatelli with guinea hen Bolognese, manchego cheese and pistachios.

Takashi | 1952 North Damen Avenue | 773.772.6170
Chef Takashi offers smoked pickled daikon, a traditional item from Northern Japan, in his soy-ginger caramel pork belly dish, as well as part of the omakase. The daikon is salt cured for a few weeks before Takashi finishes it by smoking it with pinewood.

Kabocha | 952 West Lake Street | 312.666.6214
This brand new West Loop restaurant headed by Shin Thompson takes hot sauce that has been smoked and makes a granita with it for use at the raw bar. He tops Kushi oysters on the half shell with the smoky spicy granita, young coconut water and lychee mignonette.

Atwood Café | 1 West Washington Street | 312.368.1900
Executive chef Derek Simcik gets creative and makes his own 'charcoal' out of unique ingredients to use for smoking dishes. His chestnut cake is actually smoked with chestnut 'charcoal' (which is made by smoking chestnuts for two days) to add a smoky chestnut flavor to the cake. While his lemon charcoal brussels sprout dish utilizes lemon 'charcoals' when smoking the sprouts to impart their flavor.

Embeya | 564 West Randolph Street | 312.612.5640
Beverage director Danielle Pizzutillo makes a light and refreshing sangrita with tomato water from tomatoes that are smoked with cherry wood chips in a homemade smokebox, pureed and strained. She also employs the same smokebox technique to make tobacco/cigar bitters, which are used in their Manhattan cocktails.

The Florentine | JW Marriott Chicago | 151 West Adams Street | 312.660.8866
This gem tucked away on the second floor of the hotel uses smoked honey to give their "Smokey Mountain Rye" cocktail a smoky-sweet flavor. Using a base spirit of Bulleit rye, blood orange bitters and lemon juice are added in addition to the smoked honey before it is stirred and served over ice with a burnt rosemary sprig.

South Water Kitchen | 225 North Wabash Avenue | 312.236.9300
The tomatillo bloody mary is one of the most popular choices on the newly redesigned bar program's extensive brunch cocktail list. Made from 100% agave blanco tequila and a house-made bloody mix which gets smoky with the addition of a smoked tomatillo puree.

Drumbar | Raffaello Hotel | 201 East Delaware Place | 312.924.2531
This cocktail connoisseur haven offers the smoke cocktail made with Laird's apple brandy, Nocino, Pineau des Charentes and a sarsaparilla tincture. To give it a touch of smokiness, a Heaven Hill bourbon barrel stave is fired until smoking. The serving glass is placed over the smoking oak stave to capture the smoky essence before the cocktail is added to the glass for service.

Sixteen | Trump International Hotel & Tower | 401 North Wabash Avenue, 16th Floor | 312.588.8000
Executive chef Thomas Lents continues to dazzle on his spring menu. Fresh ricotta is smoked with hay and used in his 'Jewels of Spring' dish to be served alongside crayfish, morels and fava beans as well as used in a lunch dish of smoked ricotta and wild nettle stuffed paccheri with a lamb shoulder ragout.

Trenchermen | 2039 West North Avenue | 773.661.1540
Executive chefs/partners Pat and Mike Sheerin offer an amped up version of coffee cake by pairing it with chai tofu ice cream, fried chocolate and a smoked meringue that is made by whipping smoked caramel into it.

Lockwood Restaurant & Bar | Palmer House Hilton | 17 East Monroe Street | 312.917.3404
Smoke is used to flavor as well as add some dramatic flair to the spring salmon dish at this Loop restaurant. Wild sockeye salmon is pan-seared and paired with pureed English peas, lightly sautéed morels and radishes. It is then plated and served under a smoke-filled cloche lightly flavoring the dish with smoke and adding a bit of fun to the presentation.

Catherine De Orio dishes on all things cuisine, cocktail and cosmopolitan for editorial and broadcast outlets locally and nationally. You can follow her on Twitter @CatCalls
· All Tasting Trends [~ECHI~]