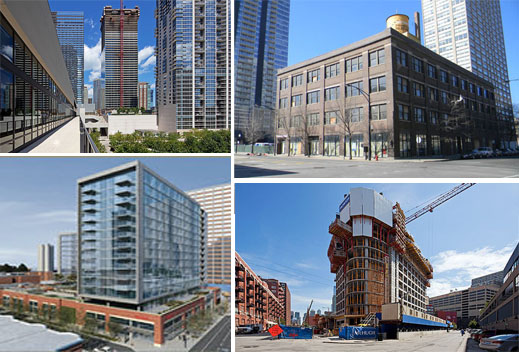 EVERYWHERE— On Thursday, we cobbled together 15 major new residential developments on track for springtime leasing or sales and mapped 'em. Most are downtown, most are new-builds, and none have fewer than 50 units. The list isn't exhaustive so check back in a week or so for updates.

SOUTH LOOP— The Old Main Post Office's British investor overlords insist on persuading the public of the relevancy of their maniacal development proposal. In this week's demonstration, the investors reframed the proposal in two phases, cut the number of towers to three, and reduced the total unit count and retail space. They're still astronomical figures. Come and see just how astronomical.

LAKE BLUFF— Two David Adler commissions on the same private drive hit the market this week. One is the focal point of what was once a 20-acre lakeshore estate. The other is the former estate's gatehouse, converted to an exquisite residence in its own right. $6M gets you the mansion, $2.3M gets you the gatehouse. No bundles here, you're dealing with two different sellers.

LAKEVIEW— There's been a lot buzz this week surrounding Out Hotel's announced plans for a 112-room "gay boutique hotel". The development, now rendered, will have 10 stories, super-luxe amenities, and will devour a couple of smaller buildings on the 3300 block of North Halsted. Reactions to the design and siting are mixed.