The Proof is in the Dough(nut)

Share All sharing options for: The Proof is in the Dough(nut)

Eater contributor Catherine De Orio is a blogger, writer, entrepreneur, Check, Please! finalist, and TV and radio personality. In her weekly Tasting Trends piece, she scours the city for what's trending on the dining scene and where you can taste the trend. Follow her culinary adventures on Twitter @CatCalls. This week's trend: Doughnuts. 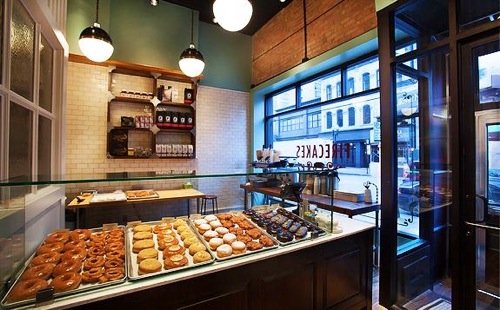 Despite having a history rooted in Middle Eastern and European culinary tradition, doughnuts feel distinctly American. They provide a certain amount of comfort and nostalgia—and have since the early part of the last century. During World War I, "doughnut girls" handed them out to soldiers fighting in France to give them a taste of home. So as all things old become new again, chefs have taken the simple sinker and put it back in the spotlight by producing high-quality, limited quantity artisan doughnuts.

Chef and dough master Jonathan Fox of Firecakes, the latest gourmet doughnut shop to hit the scene, spoke to Eater about the rise of this ever-growing trend. "It's a comfort food that resonates with everyone," he says. Fox says he wanted to open a doughnut shop way before it became trendy. His family loves them, and the inspiration for the shop actually came from his wife's great-grandfather, a baker who lived up near the Northern logging camps in Wisconsin and whose doughnuts were referred to as 'firecakes.'

So with an heirloom recipe and mastery of dough, honed through years as a chef at an upscale pizzeria, Fox set out to modernize the recipe and create a space with an old school sweet shop vibe. "I wanted to create an old-fashioned doughnut shop so that people coming in could see the doughnuts being finished in front of them," he says.

Thus you may see them slicking the doughnuts with glaze or sprinkling cocoa nibs on top of a fresh batch while placing your order. Fox adamantly believes it's important that the integrity of the product be at its peak when his customers arrive. His team starts making the doughnuts at 3 a.m. and they work until the doors open at 7:30, giving his customers "the best product right out of production." "I think you lose something when things are made elsewhere and brought in for sale," he says, "Production to consumption in the same place is simply better."

So what else makes one doughnut better than another? "Great flavor and the right texture," says Fox. The first step of ensuring the best possible flavor is procuring top-quality ingredients, which can be a process. Due to its simplicity, a glazed doughnut requires quite a bit of work in the development phase in order to stand on its own.

Using the freshest yeast for the dough is of utmost importance, Fox explains. For the glaze, it is a matter of finding the ingredients that provide the flavor balance he's aiming for. To do so, Fox tested multiple types of vanilla paste and beans--Mexican, Tahitian finally choosing Madagascar as the one that lends the best flavor. And the locally sourced wildflower honey he uses was chosen after a taste test of more than half a dozen others.

There's flavor, but anyone who has bitten into a too airy, too crumbly or too dense dunker knows texture is of equal importance. And texture is a matter of dough. There are many varieties of doughnuts, however, the two most popular ones are made with yeast-leavened dough producing a pillowy end product and those that utilize a chemical leavening agent, such as baking powder to create the dense cake-style doughnut.

How these doughnuts turn out is a matter of many variables, but basically boils down to how the dough is handled. To make a good doughnut, "it really takes someone that understands dough." He explains that the dough has to be as light as you can possibly get it without sacrificing richness. "Striking a balance is critical," he says.

When made right, "you don't know quite what happens, but you know it's very good."

Dunk it, sink it, get a hole in one, here are some of the many places (leave a comment with your favorite spot) you can taste the trend:

Firecakes | 68 West Hubbard Street | 312.329.6500
Chef Jonathan Fox strives to create layers of flavors and textures in his sweet selections. He offers about a dozen types of doughnuts consisting of a core menu of ten supplemented with seasonal styles, like farm fresh fruit jellies, that rotate into the mix. The honey-glazed and old-fashioned are very popular—he likens them to the 'margherita' of the pizza world. The Varlhona chocolate iced is the triple threat of the doughnut world: Varlhona cocoa powder is used in the base dough, which is then iced with a 72% Varlhona cocoa ganache and sprinkled with Varlhona cocoa nibs providing three expressions of the same ingredient. For those seeking something unique, he creates flavor combinations like a maple-glazed doughnut topped with Nueske's bacon and finished with maple sugar bruleed bits of pineapple. The Le Colombe artisan coffee on offer provides a perfect pairing.

Glazed and Infused | Multiple locations: West Loop, Wicker Park, Lincoln Park, Streeterville | 312.226.5556
Topped with a slick of real maple glaze and peppered maple bacon, the yeast raised maple bacon long john is one of the most popular doughnuts on the menu. Other notables are the dessert inspired crème brulee Bismark filled with vanilla crème and finished with a bruleed sugar crust and red velvet cocoa buttermilk cake doughnut with cream cheese glaze and red velvet crumbles.

Do-Rite Donuts | 50 West Randolph Street | 312.488.2483
Former L20 chef and bread master Francis Brennan offers small batch doughnuts at this Loop shop. Offering more than a dozen core flavors, like a peanut butter mousee and raspberry jelly filled PB & J bullseye, there are also daily specials, including vegan and gluten-free options—check out the baked banana donut made teeming with fresh bananas and a banana glaze. If you want some bitter with the sweet, add a cup for Dark Matter coffee to your doughnut order only a buck.

Doughnut Vault | 401 1/2 North Franklin Street | no phone
Located next to Gilt Bar, this shop serves up creative flavors like birthday cake, dreamsicle and chestnut cream doughnuts alongside classic glazed and old-fashioned buttermilk. Only open until they sell out, they tweet constant updates of the selection and availability.

Dat Donut | 8249 South Cottage Grove Avenue | 773.723.1002
Offering traditional glazed, strawberry frosted and cake doughnuts, the real star is the signature "Big Dat" doughnut, so large it could be mistaken for a toddlers intertube.

Old-Fashioned Donuts | 11248 South Michigan Avenue | 773.995.7420
This cash only South side gem has a genuine old school, no-frills vibe--open early, many flavors sell out early—especially the over-sized apple fritters chock full of apple chunks and covered with a thin, sugary glaze.

Delightful Pastries | 1710 North Wells Street | 312.255.0724
All the usual suspects abound at this Old Town bakery, but if you're lucky, they will be offering their drunken doughnuts that come in three flavors: Vanilla bean and vodka custard, chocolate custard and Godiva chocolate liqueur and passion fruit and Grand Marnier jelly.

Acadia | 1639 South Wabash Avenue | 312.360.9500
Incredibly talented pastry chef Thomas Raquel can lift even a humble piece of fried dough to a work of art—look for the debut of his drool-inducing doughnuts on Acadia's new brunch menu which will include seasonal fruit flavors as well as glossy, burnt honey glazed and stout caramel.

Belly Q | 1400 West Randolph Street | 312.563.1010
Bill Kim's Vietnamese donuts are made from scratch, double proofed and steamed before they are fried and tossed in sugar and Vietnamese cinnamon—a side of huckleberry jam and vanilla soft serve rounds out these fried fritters.

2 Sparrows | 553 West Diversey Parkway | 773.234.2320
The doughnuts here are made in-house and change seasonally (and are served all day—bonus!)—look for peanut butter and jelly, chocolate glazed with banana filling and cinnamon & sugar on the spring menu.

The Purple Pig | 500 North Michigan Avenue | 312.464.1744
No matter how stuffed one may get at this Michigan Avenue hot spot, the Sicilian Iris is a MUST have on the menu. This addiction-inducing combination of rich brioche stuffed with ricotta and chocolate chips is a bomb of sweet, creamy goodness.

Catherine De Orio dishes on all things cuisine, cocktail and cosmopolitan for editorial and broadcast outlets locally and nationally. You can follow her on Twitter @CatCalls
· All Tasting Trends [~ECHI~]