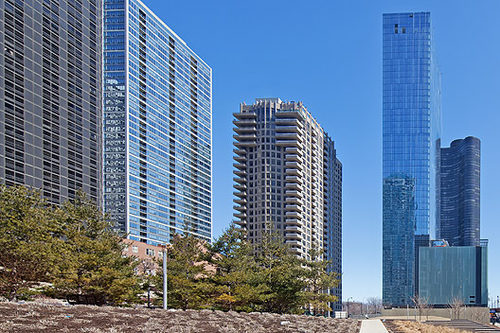 STREETERVILLE— The lakefront can get depressing with Spring being such a tease this year. We endured a visit anyway, to get y'all a fine photo update of 500 North LSD's construction. The Related Midwest-financed and SCB-designed 500-unit apartment tower is getting its final exterior touches, and occupancy isn't too far off. Come check the pics!

RIVER FOREST— Carlos Zambrano, befuddling ex-Cubs pitcher and favorite scapegoat, has just sold his West Suburban six-bed for $675K. The poor guy spent $1.2M on the place, which seems grossly inflated for the product and the area. Zambrano, who is currently unaffiliated with any team, has also been fixing to sell his far pricier Lakeview home.

HYDE PARK— The shell of the landmark Shoreland Hotel is taking on 330 brand spankin' new apartments, set to open by late summer. Curbed dropped in on the progress and although one can scarcely imagine human occupancy at the moment, the project has good momentum. Click through for the full tour.

WASHINGTON PARK— A grand home on the western edge of Olmsted's Washington Park got swept up in Olympic fever and the rush on stadium-adjacent property. Obviously there's no 95,000-seat stadium in the park, and so speculation has abandoned the once-hot neighboring homes as well. Selling this week for $549K, the seven-bed Georgian was after $1.3M a couple years ago.