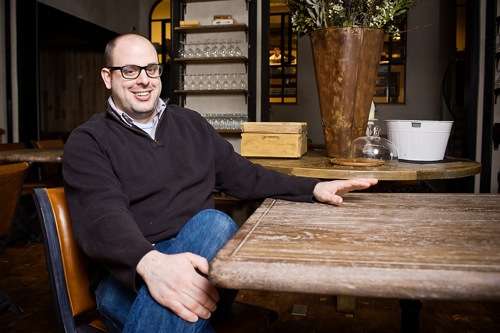 If The Bristol in Bucktown cemented Chris Pandel's status as one of the area's top chefs and restaurateurs, then Balena cemented him as one of the top in the country. This month marks the first anniversary of Balena's opening, and in barely a year Pandel was named chef of the year in the 2012 Eater Awards, Balena was among Bon Appetit's top 50 new restaurants and was a semifinalist for the James Beard Award for best new restaurant. Pandel also welcomed his second child a month ago, and chatted about the first year of Balena and what's on the horizon for himself and the restaurant in between domestic duties and running two of the hottest restaurants in town.

You just had the one-year anniversary at Balena, congratulations on that. How does it feel after one year?
It doesn't feel like a year. A year seems like a lot. It's great, the restaurant is received well. I think the neighborhood appreciates us. I think the city of Chicago has enjoyed having Balena around. It's a great, fun place to work at. It's a nice addition to our map of restaurants around the city. But it definitely does not feel like a year. It's going so fast. So much has happened. It's been wild, that's for sure.

What happened in the first year that you didn't expect?
For me, the biggest thing was seeing the part of the team that we took with us to open Balena really step up and take ownership of the restaurant. A lot of young, talented people that I worked with previously at The Bristol or restaurants before that kind of came back out of the woodwork and transformed it. Very organized and very well run, which is rare for a restaurant right off the bat. For me, it was my first time partnering with someone else. It's been a real pleasure working my previous business partner and with the guys at Boka as well. They've been amazing to work with. Just a really positive work environment. Obviously the ability to cook simple Italian food is a really big passion of mine. It's nice to have that under our wing as well.

How has it been partnering with Boka? Has it been different than the Bristol?
The nice thing about the Boka guys is that they let people do their jobs. Whether it's food related, service related, or drink related, we all have the same mindset, and it's really been nice to come together with that. They've given us a lot of infrastructure to base our restaurant off of, which is incredible for three guys coming from a really small house in Bucktown.

How about the initial idea of Balena compared to Bristol?
Myself, John Ross and Phil Walters, you know, have The Bristol, which is kind of an American restaurant where we can cook and serve anything under the sun. And we wanted to focus in a little more and the three of us all agreed that Italian food is one of our favorites and Italian wine is one of Phil's favorite things. It was kind of an obvious next step for us to provide that for the city of Chicago. I've always wanted to open up my own Italian restaurant, personally speaking, and the opportunity just kind of came faster than we all thought it would.

How did the location come about, going from Bucktown over to Lincoln Park?
Rob and Kevin from Boka were old friends of ours. Conversations had been sparked about a second concept and it just so happened they were willing to do something with the space. The conversation happened really quickly and we all got along, obviously, and the restaurant idea came through clearly and quickly. We just kind of went for it. We all sat down and said, "let's do it, why not?" Pretty painless decision on all of our parts, which is nice.

Were there any issues logistically when you first opened?
There are always bumps in the road with a restaurant opening. It's a problem-making machine, as we like to say. Especially with a restaurant of that size, there are always kinks to get out. But realistically, there was nothing that was going to make the ship capsize right away. There was nothing that was going to stop service or ask the guests to go home nicely cause we can't handle it. I say that and I'm knocking on wood, but it was like any restaurant opening: Long hours, a lot of taxing minor details that had to get ironed out for the first three-to-six months. Then it takes on a life of its own after a while. At the end of the day, the guest kind of dictates what the end result is cause it's what they want or what they don't want, you know?

Could you describe how the personality of this one? How it came about?
The personality of this guy was, basically, it was based on very simple things: pizza, pasta, flour, water, gelato—really simple stuff. And a very specific beverage program that focused on all good things Italian. The design was actually simple, but the space itself is so grand when you walk in, it's got this giant cathedral ceiling. When we took it from our landlord it was so dark, it just needed a facelift. It really turned into this big, boisterous restaurant that still has a really good comfort factor to it.

Did the customers force any changes in the beginning?
No, they don't really force anything. With that neighborhood there's pre-theater because we have the Steppenwolf (Theater) across the street and George right next door. So you have to acclimate to that, for sure, and take care of the folks that want to eat at a faster pace and maybe a little bit lighter meal. We're just trying to provide something that people are comfortable with within that atmosphere. We're not necessarily trying to play it safe, but it is pizza and pasta at the end of the day.

Anything else on the horizon?
You know what, I've been trying to work on a cookbook. It's coming along extremely slowly because there are so many irons in the fire. That's pretty much it. Just trying to pay attention to the people we work with and obviously trying to make sure my family's taken care of.
· All Balena Coverage [~ECHI~]
· All Chris Pandel Coverage [~ECHI~]
· Balena [Official Site]