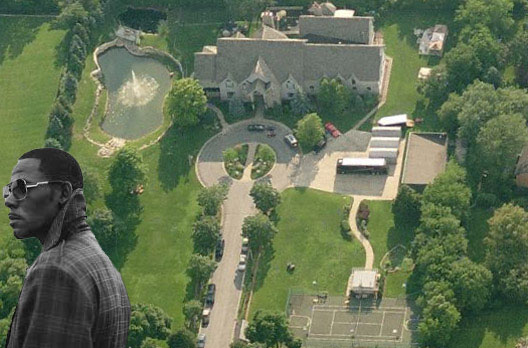 OLYMPIA FIELDS— R. Kelly's lesser-known, non-piss video implicated suburban property has been fully repossessed by the bank in auction. Kelly made an attempt to short sell the gigantic mansion and its 3.7-acre grounds for $1.6M late last year. Clearly, the scenario only grew more nightmarish in subsequent months. The lender took hold of the estate for a piddling $950K.

WRIGLEYVILLE— Rosemont Mayor Brad Stephens is advancing a ballsy bid to wrench the Cubs away from Wrigley. It's probably his own particular pipe dream, but the pitch is laden with incentives and might be the kind of thing that gives the Ricketts family some leverage with Chicago in negotiating for renovations and programmatic changes.

WEST TOWN— The week's most dumbfounding find is definitely this town home atop a stucco fortress-like structure at Noble & Hubbard. The style is gaining some currency around the globe, unfortunately, but we haven't seen much of it in Chicagoland. There really aren't any excuses for it. The new-to-market three-bed is asking $440K.

EVERYWHERE— Super Mario Bros gaming design is one of those holdovers from the '80s that never ceased to be cool, not even for a moment. Local comedian and Chicago Now columnist Robert Bacon layered the 8-bit thematic content from Super Mario 3 onto the conventional CTA "L" map. The result is a most splendid thing.