Oh Malort, Why You So Bitter?

Share All sharing options for: Oh Malort, Why You So Bitter?

Eater contributor Catherine De Orio is a blogger, writer, entrepreneur, Check, Please finalist, and TV and radio personality. In her weekly Tasting Trends piece, she scours the city for what's trending on the dining scene and where you can taste the trend. Follow her culinary adventures on Twitter @CatCalls. This week's trend: Malört. 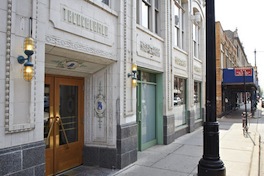 Earwax, bile, acetone, band-aid...not exactly what one wants to hear when asking for a description of a drink's flavor profile. Yet, this is malört. This spirit has gained a cult following amongst beverage industry professionals and is beginning to find a mainstream following as well—thanks to the ambassadorship of top bartenders around town. Given that Trenchermen has thrown a party with Jeppson's Malört as the guest star, Eater chatted with their minister of libations, Tona Palomino, to get the scoop on this polarizing potion.

A bit of history to start: Swedish immigrant Carl Jeppson began making this bitter bevy during Prohibition, but it took another decade before it went into commercial production. Prohibition ended and Jeppson sold his recipe to George Brode who began to commercially produce and distribute it in Chicago. When Brode passed away, he left the company to his secretary, Pat Gabelick, who continues to run it today. Due to some financial snags, she moved malört manufacturing to Florida?but lucky us, it's still only distributed in Chicago and has a cult following here.

Malört (which means "wormwood" in Swedish) is a variation of bäsk brännvin, a Swedish spirit, which utilizes wormwood as the main distillate and is said to help settle the stomach. "Wormwood," Palomino explains, "is one of the most bitter botanicals with which to flavor anything. By design, this is meant to be bitter." The first notes are sweet, but then it ends with a walloping punch of long lingering bitterness—much like the trajectory of a relationship gone terribly wrong. Those initial sweet notes are deceiving, but "you need a little sugar to help the medicine go down," jokes Palomino. He likens the taste to what one would get if they bit an orange and tasted both the pith and fruit simultaneously—sweet up front and bitter on the backend. This complexity, plus "it's creamy, weighty texture" make it an enjoyable (albeit challenging) element with which to experiment.

And experiment he has—behind his bar, it's been aged, smoked, tapped, mixed, muddled, and soon to be infused. The malört on tap, he notes, is more a conversation piece than anything else as it doesn't affect the spirit's flavor. Aging, however, turns it into a mellower, more potable version of its younger self. "It gains sweetness. It's a lot sweeter, has a tiny bit of tannin and flavors it picks up from the barrel." If you are a first time malört drinker, this is a great way to start your foray into this bitter booze. As an element in a mixed drink, Palomino explains it plays better with clear spirits and serves to "add a bitter quality to the drink without adding in too much sweetness."

But how did this vile tasting liquor gain such cult status? Palomino explains there are two strains of the cult of malört: non-industry and industry. For those not in the industry "It's like an initiation, the person sending the drink wants to see the face his buddy makes after drinking it." In fact, entire websites are dedicated to images of people's post-malört drinking face ("malört face"). And for industry folks it is an "exercise in civic pride, it's from Chicago, it's ours. We embrace it. I mean, what other place can you think of that has its own spirit?" Perhaps that explains its recent rise in popularity—love it or hate it, it's ours. And one thing about Chicago for sure—we are loyal to our own.

Whether it's a rite of passage, a dare, or to satisfy a morbid curiosity, here's a few (of many) places to test out your malort face and show some civic pride:

Trenchermen | 2039 West North Avenue | 773.661.1540
Palomino gives a classic cocktail a bitter twist in the desperate vesper. A combination of Plymouth gin, lillet blanc and malört, the liquor rounds out the orange quality of the lillet, adding the bitter quality present in orange pith to create a well-balanced cocktail.

Sepia | 123 North Jefferson Street | 312.441.1920
A blend of malört, rum, gin, sherry, Cointreau, orange juice and Bittermen's emakule tiki bitters makes up Josh Pearson's "I'm not drinking that." This cocktail proves once again that any ingredient placed in Pearson's hands can be made into something worth sipping.

Bar Deville | 701 North Damen Avenue | 312.929.2349
The hard sell is in fact quite the opposite in this industry favorite bar in Ukranian Village. Brad Bolt combines Beefeater gin, St. Germain, lemon juice and malört with a spritz of essential oils from a grapefruit peel to create a cocktail that hits every flavor note just right.

The Violet Hour | 1520 North Damen Avenue | 773.252.1500
Bar manager Robby Franklin Hayes has given Jeppeson's malört a bit of competition with R. Franklin's Original Recipe malört which he created and partnered with Letherbee Distiller's to produce. A higher proof (100 v. 70) blend of botanicals like elderflower, grapefruit peel, juniper and anise mixed with wormwood is exclusively offered here. Try it straight or check out the thigh high cocktail featuring it.

Red Door | 2118 North Damen Avenue | 773.697.7221
Bar director Jay Schroeder pays homage to the spirits hometown in his Chicago 75, a riff on the classic French 75 cocktail. He blends local spirits malört and North Shore aquavit with lemon, honey, angostura bitters and then substitutes in Goose Island 312 for the champagne to create a Chicago classic.