Mini Hut is a Garfield Ridge Chicken Favorite for Decades

Share All sharing options for: Mini Hut is a Garfield Ridge Chicken Favorite for Decades 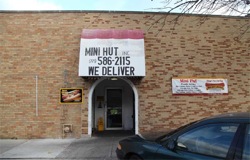 Garfield Ridge may not be known as a culinary mecca, but it definitely rivals any North Side neighborhood for home of the city's best fried chicken.

If you're not from the area, you'd probably drive right by this tiny, hole-in-the wall establishment. It may not look like much from outside, and, honestly, it doesn't look much on the inside either. A few bright yellow booths allow patrons to wait for their food while photos of local baseball teams line the wall. But people don't come for the décor—they come for the food. The fried chicken is a staple and a must-have for the entire neighborhood.

10 minutes west of Midway Airport, Mini Hut has been frying up chicken for this Southwest Side neighborhood for decades. It has been at its current location since 1998 and just a few blocks away for the 26 previous years. For these neighborhood folks, when they say they're picking up Mini Hut, it is automatically assumed they are ordering the chicken. It's a surprise that there is still any other fried chicken places around the area.

Garfield Ridge and Clearing residents say the chicken is moist, salty and flavorful with a crust that is buttery, light and crispy. After marinating in water, salt and garlic overnight, the chicken is covered with a secret recipe breading. Owner Don Engel, who has owned and operated Mini Hut since the beginning, attributes the popularity to both the marinade and the unique breading.

Breasts, thighs and wings sizzle in the fryer for 20 minutes. When it's cooked and still glistening, it's served on top of a massive bed of crinkle cut fries and tucked in with a few soft, slightly chewy biscuits. All served in a white, cardboard cake box, summing up this blue collar neighborhood – simple, no frills and authentic.

People generally call ahead to place their orders since the chicken takes up to 30 minutes to cook. The place doesn't get crowded per say, but the door is revolving with people running in to pick up their orders to take home to their families.

The fried chicken is the star of the show, but there's plenty of other options similar to what you'd find at any Chicago hot dog stand. Dogs, burgers, beef sandwiches, and sides like breaded mushrooms and a Mother-in-Law, which is a tamale and chili served in a cup, are just a few of the options.

With chicken locals swear by, four decades of history and reasonable prices, Mini Hut is worth a trip regardless of where you live.
· Mini Hut [Facebook]